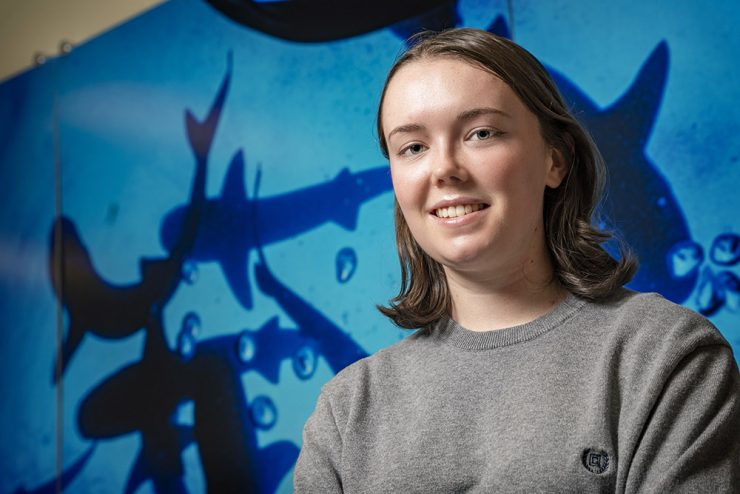 Marine sciences major Ashley Goland ’23 has been interested in animals since she was very young, spending a lot of her childhood time reading about them in the local library. Growing up in North Andover near the Massachusetts coast, she became especially interested in sharks as she learned about the movement of great whites into Cape Cod.

But during her freshman year in the School of Marine and Atmospheric Sciences, after writing several science articles for the Stony Brook Young Investigators Review, a forum for students interested in science writing, it was journalism that put the bite on her.

After graduating from high school, Goland applied to Stony Brook because of its strong marine sciences program, and she received enough scholarship money to make it an affordable option even from out of state. Once at Stony Brook, however, her horizons would broaden. Though she enjoyed courses on seabird conservation and biology, she became especially taken with a linguistics course.

“I had never been exposed to that area of knowledge before, and there was a lot of intriguing history and social interplay to learn about,” she said. “I was and still am fascinated by the background of language in America and the driving forces behind the dialects that exist today.”

When two of Goland’s professors recommended that she take writing courses, she began looking into possible minors, ultimately settling on journalism.

Last summer she reached out to David Taylor, an assistant professor and faculty director of the environmental humanities major in the Sustainability Studies Program in SoMAS, about conducting research during the fall. Taylor connected her with an internship opportunity at The South Fork Natural History Museum and Nature Center (SOFO) in Bridgehampton, on Long Island’s South Fork.

Her current work with SOFO is focused on producing collateral materials to help the museum connect with potential visitors, supporters and donors. This is primarily done through editing photos and writing captions for social media posts, and designing and writing brochures. Goland said the internship has enabled her to expand both her experience with sharks and her skills as a communicator.

“I like that it allows me to combine my interest in science with my affinities for more creative outlets like writing and designing visual works,” said Goland. “I hope to become more familiar with shark research on Long Island and with the workings of research organizations, as well as to build a portfolio of items I have written and designed. My absolute favorite part may be looking at the wealth of shark photos SOFO has shared with me.”

Halfway through her sophomore year, Goland has some advice for fellow students just beginning their journey at Stony Brook.

“One thing that helped me a lot my freshman year was to start work as soon as it’s assigned, even if only a little bit,” she said. “That has been a useful habit over my years of school. It allows me to make steady progress on my assignments and prevents the need for cramming the night before a due date. I also suggest joining clubs or intramural sports because they provide great settings for making friends.”

As she looks ahead to the rest of her undergraduate career, Goland hopes to learn as much as possible about numerous fields and meet professionals who can share valuable information.

“I am still unsure of my career goals because I’m interested in more than one thing,” she said. ”Right now my thoughts are on animal care or science writing. I’ve been interested in animals for a long time, and I would find that work fulfilling. But I also realize that the language of most public research is not very accessible to the general public. I’d like to one day combine my skills in science and writing to help bridge that gap if I can.”

Wherever she ultimately ends up, Taylor believes she’s got the skills to make a positive impact.

“Ashley is an extraordinary student who moves as easily in marine sciences as she does journalism and communication,” said Taylor. “Her outreach work with the South Fork Museum shark research team is a perfect example of the need to fully understand the science at work and have the creative and media skills to communicate that to stakeholders. I was lucky to have a small role in mentoring her outstanding work.” 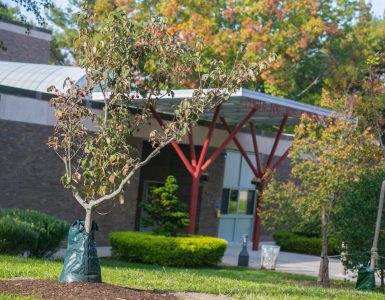