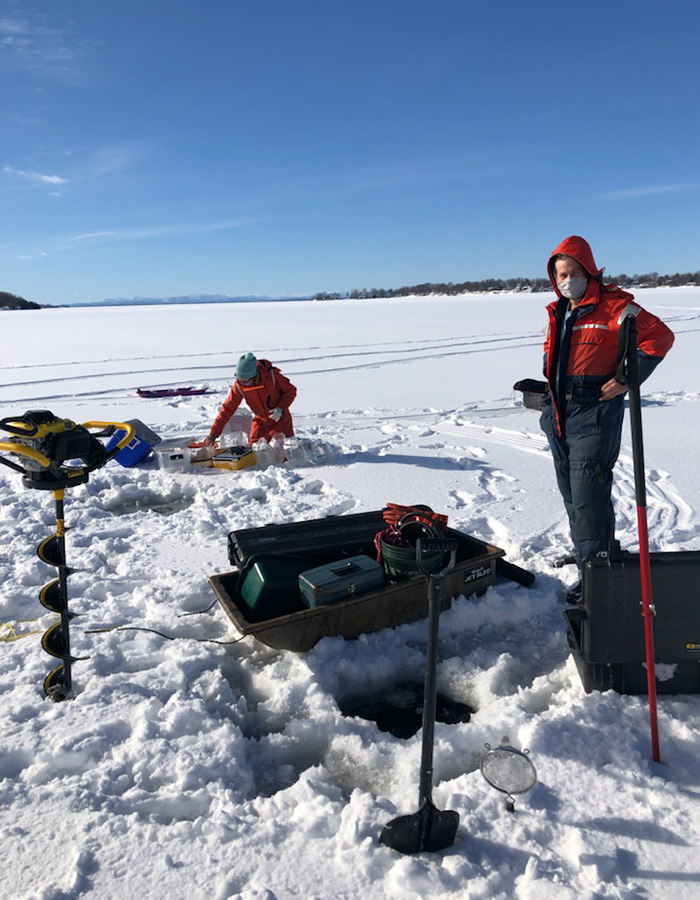 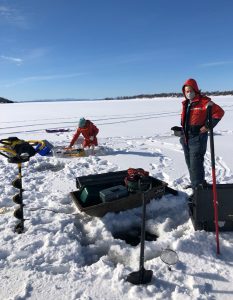 Scientists at Stony Brook University, the University of Vermont and Dartmouth College have been studying mercury uptake into the food chain during the winter, and how mercury uptake may change in the future, as climate conditions change.

The study, which was awarded $149,930 over two years by the Lake Champlain Sea Grant, began in May 2020 and will continue through February 2022, according to Roxanne Karimi, an adjunct assistant professor at Stony Brook University’s School of Marine and Atmospheric Sciences (SoMAS).

Scientists worked through the pandemic to find out what happens to mercury, a common contaminant found in fish, as the fish food chain continues to operate during the winter. They have been collecting samples from Lake Champlain near the U.S.-Canadian border — at St. Albans Bay and Mississquoi Bay — attempting to find out whether mercury changes in chemical form and concentration in the water, lake sediments, and organisms that are in low in food chain, such as mussels. The information will indicate whether mercury is readily taken up into the food chain, including fish, during the winter compared to other seasons.

“So far, we have found that methylmercury, the more toxic and biologically available form of mercury, occurs in the water — in dissolved form — in concentrations that are similar to those in other seasons,” Karimi said. “At this point, it is too early to tell whether there is a consistent pattern, or whether winter concentrations are consistently higher or lower than in other times of year.”

Karimi noted that the predominant assumption was that mercury bioavailability decreases in winter due to lower temperatures, but this has not been adequately studied. “So far, our preliminary results counter that assumption, and our project will see how it ultimately holds up,” she said. “We will also examine how changes in winter climate conditions, such as changes in temperature and ice cover, might enhance or diminish mercury availability and uptake into the food chain in the future.”

The scientists will also use data from the field to predict how fish mercury levels will change with climate. Key to answering this question is the ice cover during the winter, which is expected to decrease in thickness and duration as the climate warms. These factors influence how mercury and lake food chains function, and whether future climate conditions will enhance or diminish mercury buildup in fish in the future.

The results from this project will provide the information necessary to predict changes in fish mercury levels, overall health value for human consumption, and inform fish monitoring and advisory policies.

Karimi is the lead and sole investigator at Stony Brook, while SoMAS colleague Maureen Murphy provides outreach on the human health risks of mercury in fish to the public. The co-investigator is Andrew Schroth from Vermont, while Vivien Taylor at Dartmouth provides research support.