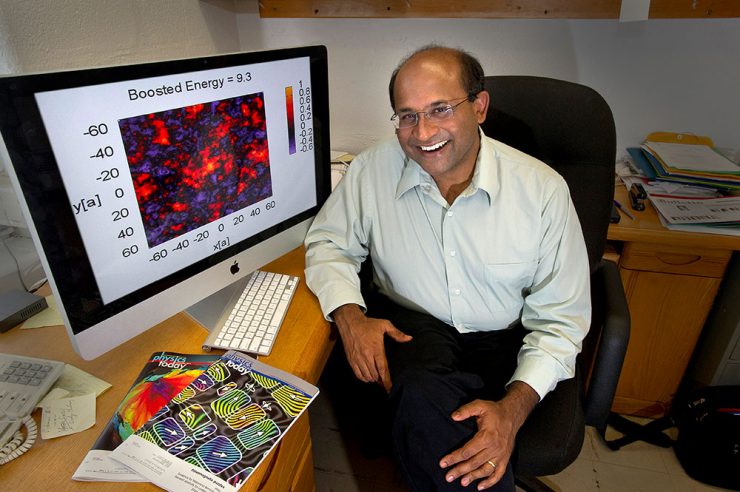 The Simons Foundation has announced a new research collaboration to explore the “glue” that holds the visible matter of the universe together.

A team of 13 principal investigators, led by Igor Klebanov of Princeton University and including Raju Venugopalan, adjunct professor in Stony Brook University’s Department of Physics and Astronomy, will delve into the details of quantum chromodynamics (QCD) — the theory that describes the interactions among the most fundamental building blocks of visible matter.

“The collaboration will bring together three communities of theorists specializing in the study of experimental data, computation and analytical approaches to QCD,” said Venugopalan, who is also a senior physicist at the U.S. Department of Energy’s (DOE) Brookhaven National Laboratory. “The big motivation is to bring together these communities to address a problem that’s at the heart of all matter” — namely, how the strong nuclear force keeps fundamental particles called quarks and gluons confined within the protons and neutrons that make up atomic nuclei.

“By understanding confinement, we can learn fundamentally how hadrons — protons, neutrons and other composite particles made of quarks and gluons — are put together,” Venugopalan said.

The theorists will benefit from close proximity to the researchers at — and the data generated by — the Relativistic Heavy Ion Collider (RHIC), a DOE Office of Science user facility for nuclear physics research located at Brookhaven Lab. Research at RHIC is all about quarks and gluons.

Experiments at RHIC smash together ions (the nuclei of atoms) travelling at nearly the speed of light. RHIC’s high-energy heavy ion collisions recreate conditions last seen in the early universe, essentially dissolving the boundaries of individual protons and neutrons so that quarks and gluons are no longer confined within those individual nuclear building blocks. By tracking the variety of particles that stream out of the “quark-gluon plasma” (QGP) created in these collisions, RHIC’s detectors gather data on how quarks and gluons behave.

Nuclear theorists like Venugopalan also study QGP created in higher-energy heavy ion collisions at Europe’s Large Hadron Collider (LHC). They use the equations of QCD to both predict and interpret what the RHIC and LHC experiments might reveal. Known as “phenomenologists,” for their study of experimental phenomena, they form one arm of the new collaboration.

In the coming decade, they’ll also make use of data from the Electron-Ion Collider (EIC), a facility that will be built on the backbone of RHIC. The EIC will collide electrons with ions, essentially using the electron beams to “see” inside protons, neutrons and nuclei.

“The Electron-Ion Collider will be the brightest, highest intensity ‘femtoscope’ to shine on the structure of matter,” Venugopalan said, referring to its ability to capture details on scales much smaller than a femtometer — one millionth of a billionth of a meter. Using the future EIC, scientists will take “snapshots” of quarks and gluons and study their interactions within the matter that makes up our world today.

Read the full story at the Brookhaven National Laboratory website.