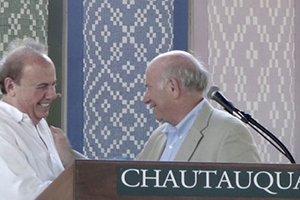 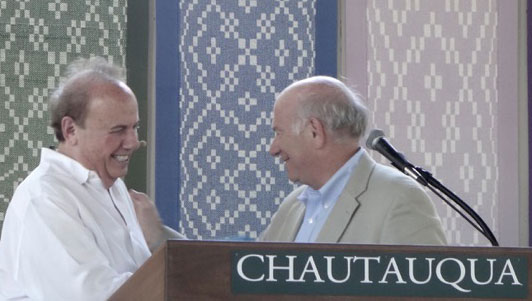 Roger Rosenblatt, professor in the Southampton MFA program and a Stony Brook University Distinguished Professor of English and Writing, has been awarded the President’s Medal by the Chautauqua Institution.

Given for one’s body of work, other recipients include Sandra Day O’Connor, David McCullough, E.O. Wilson, and Rita Moreno. Chautauqua Institution president Tom Becker presented Professor Rosenblatt with the medal on June 28 in front of a standing ovation of 7,000 people.

Dr. Rosenblatt is the author of six off-Broadway plays and 15 books, published in 13 languages. His published works include Kayak Morning, Unless It Moves the Human Heart, Making Toast, Beet, Lapham Rising, Thomas Murphy and Children of War, winner of the Robert F. Kennedy book prize. His one-man show, Free Speech in America, was cited by the Times as one of the 10 best plays of 1991. He was awarded the 2015 Kenyon Review Award for Literary Achievement.

Each summer the Chautauqua Institution, a non-profit adult education center in southwestern New York, offers nine weeks of summer programs, including lectures, performances and the teaching of the arts for over 100,000 people.