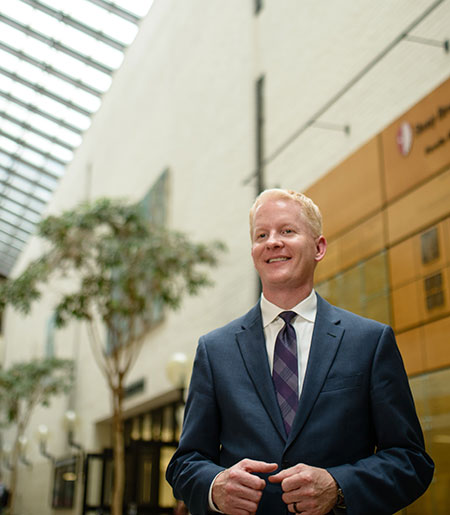 Following the passing of Dr. Peter Baigent, vice president of Student Affairs and president of the Faculty Student Association, along with the recent retirement of former Dean of Students Jerrold Stein, the university was left with the unenviable task of replacing two giants in the campus community.

“You need someone really special to succeed in that new role,” said Jeffrey Barnett, interim associate Dean of Students and longtime colleague of Gatteau.

“Combining these two positions can work, but you have to find the right person to do it,” Barnett said. “Rick, I think, is that right person.”

Gatteau has served in a variety of functions in his 25 years in higher education, beginning as a hall director at the University of Vermont and director of Residential Life at Iona College. He worked at Columbia University in 1999 as senior dean of the sophomore class before he joined the Stony Brook team in 2002 as director of Academic and Pre-Professional Advising. He was appointed assistant provost in 2011 and has served as the associate provost for Academic Success since 2014. Gatteau is also the faculty director of the Higher Education Administration graduate program.

“My confidence in Rick comes from the fact that he’s truly passionate about Stony Brook and that he really cares about our students,” Barnett said. “One of Rick’s great strengths is that he includes other people’s ideas and visions and synthesizes them with a sketch that he already has in his mind.”

Gatteau is charged with centralizing student life, co-curricular learning, large-scale programming and commuter student engagement. Additionally, he will be accountable for the large Campus Residence population, student health and counseling and psychological services, Red Watch Band and other bystander intervention programs, Multicultural Affairs and the LGBTQ* Center. These responsibilities, traditionally associated with the Dean of Students, will now include oversight of community standards, budget, development and assessment, communications and human resources. Despite the broad scope of his responsibilities, Gatteau is confident.

“I envision the Vice President of Student Affairs as more of the leader in charge of helping build the capacity of the division in terms of budget, personnel, and backbone operation pieces that keep the whole operation running, while the Dean of Students, as the core student advocate, has the opportunity to engage with students,” Gatteau said.

“When I look back at the role I was playing as associate provost, that is exactly what the balance was. Managing a lot of projects and initiatives to keep the goals of the university in the forefront, but also engaging individually and with groups of students.”

Where can students and staff find Gatteau? That would depend on the day of the week.

Gatteau plans to spend Monday, Wednesday and Friday in the Dean of Students office in the Student Activities Center (SAC), while committing Tuesdays and Thursdays to the Office of Student Affairs in the Administration building. This arrangement will allow him to interact with all of the teams. With an eye on what is best for the university and fully recognizing the finite amount of space on campus, Gatteau is transforming his office in the Student Affairs suite into a shared space that can be used by other office colleagues on days he is in the SAC.

Gatteau graduated from Bucknell University in 1992, with a Bachelor of Science in business administration, before earning his master’s degree in Higher Education and Student Affairs from the University of Vermont. He completed his PhD in Educational Leadership and Administration at Fordham University, where his doctoral dissertation research focused on female presidential leadership at selective higher education institutions.

Previously, Vice President for Strategic Initiatives Matthew Whelan, Ed.D., had been overseeing Student Affairs, and Dean Stein temporarily returned to DOS while the institution pursued an interim Vice President and Dean of Students.

“The quality, professionalism and experience of the team is just so evident that I think the role I am able to serve is to help build a spirit and a vision for the entire division and the university at large,” said Gatteau.

“From the student perspective, they don’t care what division we report to or what department we work in — they just want help,” Gatteau said.

“Our role is to think outside of our realm and make sure we are creating as seamless and integrated experience as possible.”