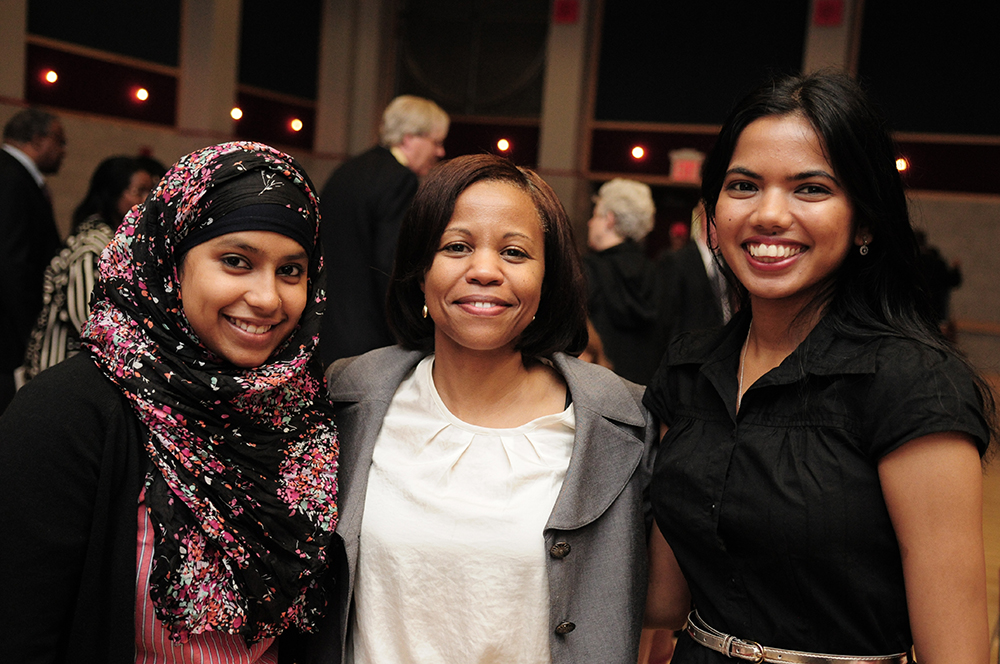 Finding ways to enable economic and social mobility, one of the defining hot-button issues of our time, is a challenge for many institutions of higher learning. Removing the obstacles to a quality education isn’t just a moral mandate for college and universities — it’s become a necessity.

As the students of today become the employees of tomorrow, it will become increasingly important for them to acquire the specialized skills and knowledge needed to meet the heightened demands of the 21st century workplace.

Creating opportunity for disadvantaged students has long been a priority at Stony Brook. Indeed, one of the University’s goals, as stated in its Strategic Vision, is to increase access, “including the number of undergraduate and graduate students from underrepresented minority groups, while enhancing student quality and implementing strategies to improve retention and graduation rates.”

With initiatives as diverse as the demographics it serves — students in elementary, middle and high school, as well as those at the undergraduate, graduate and postdoctoral levels — Stony Brook is improving the economic prospects of those who are disadvantaged by giving them the tools to succeed.

No one knows this better than Cheryl Hamilton, Assistant Provost and Director of EOP/AIM (Educational Opportunity Program/Advancement on Individual Merit), a student support program that recruits, enrolls, retains and graduates economically disadvantaged students who have the potential to succeed in college.

Support Students for Success
“If we are going to have an educated workforce, it is important for Stony Brook as a state university to make higher education attainable, not just by providing access and admission but also the support that students need to be successful,” said Hamilton, who has been with EOP/AIM for 21 years and director since 2000.

When an EOP/AIM student succeeds academically and moves into the workplace, there is an obvious benefit to the individual, but the local economy also gets a boost.

“The reality is that the students in our program by and large end up staying in New York State and working here, and for every dollar that we invest in them, they’re giving back $10 annually in tax revenue,” Hamilton said.

Charles. L. Robbins, Vice Provost for Undergraduate Education and Dean of Undergraduate Colleges at Stony Brook, who along with Hamilton was instrumental in bringing the Children’s Defense Fund Freedom School — a summer literacy and enrichment program for schoolchildren — to campus, agrees that providing educational opportunities to the disadvantaged is an investment in the future.

“Education is the best way to move people out of chronic poverty. By allowing people to gain access to quality higher education, you’re not only helping them, you’re also helping their family of origin and their future families,” he said. “All of their lifestyles will be better because of the fact that somebody was able to gain a higher education.”

Many factors come into play when determining an individual’s need for a specific program — family income being just one criterion. First-generation college students, for example, tend to populate programs designed to boost economic and social mobility. At Stony Brook, more than one–third of undergraduates are first-generation college students, according to statistics compiled by the University’s Office of Institutional Research, Planning and Effectiveness.

“A lot of students are the first in their families to go to college and by the University’s standards, they’re considered academically disadvantaged, which means that they fall a little bit shy of the criteria for general admission, and that’s largely because of socioeconomic factors,” said Hamilton. “On Long Island, where you live determines where you go to school, so if students are in a high-poverty area in all likelihood they’re attending a school with few resources. For example, there may not be any college preparatory curriculum or AP courses, or maybe there’s one guidance counselor for a thousand students.”

Giving Kids a Brighter Future
Early intervention initiatives, such as Stony Brook’s six-week-long Freedom School, are among the best ways to put young children on the path to a brighter future. But even older disadvantaged students in the community can find ways to thrive through opportunities for enrichment.

Health Careers Academic Readiness and Excellence (HCARE), which operates within the School of Health Technology and Management’s Center for Community Engagement and Leadership Development, is one such program taking on inequality. Serving high-needs students in grades 9 to 12 in the Amityville, Brentwood, William Floyd and Wyandanch school districts, as well as the Sovereign Unkechaug Nation, HCARE targets some of the most ethnically diverse and economically disadvantaged students on Long Island. Its primary objective is to provide students with the skills and resources necessary to become part of a more diverse and competitive applicant pool for allied health programs and jobs. This is accomplished through outreach, college preparation assistance and educational programming.

“Long Island is home to residents of tremendous economic privilege, but also to residents who face economic disadvantage,” said HCARE Director Carlos Vidal. “The services we provide through HCARE are designed to address the educational disparities found in Long Island’s districts of highest need, providing students with the skills to succeed academically and pursue higher education.”

Financial Support Is Key
Programs aimed at helping disadvantaged students often require tremendous financial resources. For example, in the University’s Center for Inclusive Education (CIE), which was established at Stony Brook in 2002 with the goal of advancing diversity in graduate education, academia and the scientific workforce, more than $8 million in funding for its seven economic and social mobility programs comes from the National Science Foundation, National Institutes of Health and New York State, depending on the initiative.

As with HCARE, the CIE is focused on developing a more skilled, educated and diverse workforce.

“When you think about social and economic mobility, you’re talking about opportunities among a much more diverse workforce. All the various domains of our nation should reflect the valued members of our communities,” said Nina Maung-Gaona, former Assistant Dean for Diversity in The Graduate School and Director of the CIE. The seven programs implemented through the CIE are designed to recruit, retain and graduate underrepresented minority and otherwise disadvantaged scholars, particularly those who advance the mission of increasing diversity in their respective fields.

“Along with specific racial and ethnic groups not being represented in many areas of the workforce, other social justice issues, such as gender inequity, are particularly prevalent in certain academic disciplines, Maung-Gaona said.

“When you have economic and gender inequities, for example, you’re going to have compound injustices,” she said. “Lack of opportunity within particular groups can mean they are not represented at the decision-making table. With so many critical issues facing our highly globalized society today, we need to be an example of how to flourish as an inclusive community.”

Opening the Door to STEM Careers
Finding meaningful employment is a priority for those who are disadvantaged, but it is also important that students have access to growing fields that pay well, such as careers in science, technology, engineering and math (STEM). According to a recent report from the U.S. Department of Labor, several U.S. industries with the highest mean wages are STEM-related.

Preparing students for STEM careers is the primary objective of STEM Smart, which is administered by Stony Brook’s Department of Technology and Society. STEM Smart, which was created in 1986, serves as an umbrella for an array of programs serving approximately 800 economically disadvantaged students from middle school through graduate school.

“We have many students on the Stony Brook campus who are better able to make their way into the research or teaching infrastructures than others,” said David Ferguson, Associate Provost for Diversity and Inclusion and Distinguished Service Professor and Chair of the Department of Technology and Society. “STEM Smart helps students excel in these areas at the pre-college level, so we’re helping them do what is necessary to be prepared to pursue such majors in college should they choose to do so.”

“The knowledge of STEM can be relevant and applicable to many professions. Especially at the high school level, it’s hard to know where students are going to end up, so we try to build in some flexibility by making STEM an option,” said Ferguson. “It is an area that some students may not have originally considered, but we are helping them to see it as a potential choice.”

STEM Smart and all Stony Brook programs that battle inequality not only provide disadvantaged students with access to opportunity, but also give them a powerful, invaluable tool to take them through life — the confidence to aspire to something better.

“We’re very much interested in motivating students to succeed,” said Ferguson. “It’s been proven that social and economic mobility has a lot to do with connections to various opportunities and the extent to which an environment can facilitate those connections. What are the dimensions of that? How do we help students? What is necessary to create an environment that supports that? That’s what we are trying to do at Stony Brook University.”