In a video posted to social media December 20, President Stanley called for an end to sexual violence and abuse, challenging actor Edgar Ramirez, NCAA president Mark Emmert and University of Buffalo president Satish Tripathi to join him in his advocacy.

The initiative is sponsored by the international HeForShe movement. Created by UN Women — the United Nations entity for gender equality and the empowerment of women — HeForShe began in September 2014 as a global effort to engage men and boys in support of gender equality. In January 2015, HeForShe’s IMPACT 10x10x10 program launched, which convenes 10 heads of state, 10 global CEOs and 10 university presidents to fast-track gender equality in boardrooms, classrooms and world capitals. Stony Brook University is one of the 10 universities globally — and one of only two in the US — to join this important initiative.

“We all have the right to live free from violence, harassment and fear, and to be valued for our work and our service,” President Stanley said. 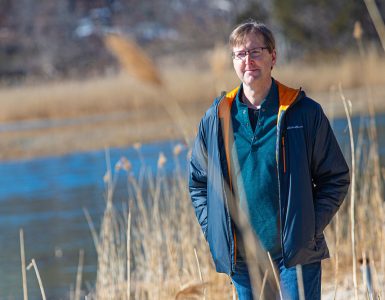 Professor Inspires Lab Team by Tapping Into His Past By Liza N. Burby | Photography by John Griffin Carlos Simmerling, PhD, was one of those kids with a chemistry kit in his basement and tolerant parents who didn’t mind...