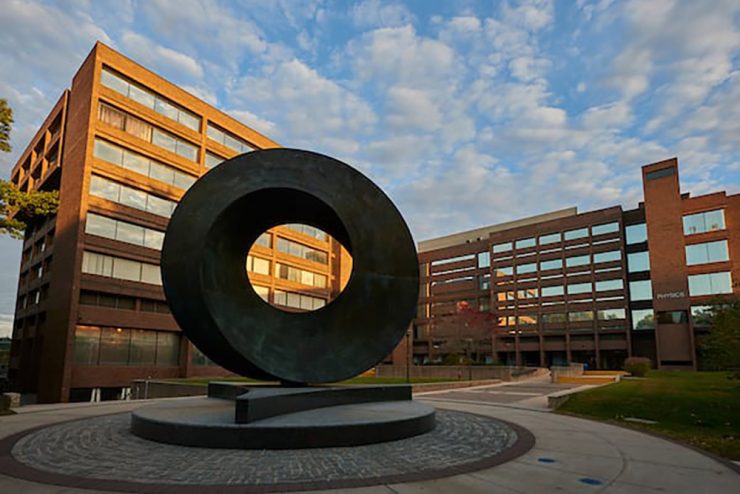 Stony Brook University Assistant Professors Cyrus Dreyer and Navid Vafaei-Najafabadi in the College of Arts and Sciences Department of Physics and Astronomy have earned Early CAREER Awards from the National Science Foundation (NSF). This award is bestowed upon early-career faculty who show promise as both researchers and educators. As Early CAREER recipients, Dreyer and Vafaei-Najafabadi will collectively receive more than $1 million in grants to support their research.

NSF Early CAREER Award recipients are distinguished as up-and-coming professionals poised to advance the mission of their academic departments. Both Dreyer and Vafaei-Najafabadi investigate unique scientific phenomena in their research at Stony Brook. The goal of their projects is to revolutionize their areas of research toward applications that benefit science and society.

Dreyer studies “point defects,” or ubiquitous imperfections in materials such as misplaced atoms that either improve or inhibit the functionality of electronic devices. Existing computational techniques for studying point defects are known to be largely inaccurate. Professor Dreyer’s project looks to develop and implement new computational methods that employ a process called “embedding” to significantly improve computation accuracy. Embedding combines conventional techniques with advanced theories to properly convey the implications of a given point defect. This research has the potential to bring unprecedented innovation to the development of future electronic devices including quantum computers. Dreyer also holds a joint position with the Flatiron Institute.

Vafaei-Najafabadi’s research concerns particle acceleration and plasma physics where new methods for accelerating particles to extreme energies are being developed for the next generation of high-energy physics research. He collaborates with researchers in the Brookhaven National Lab, and his research is enabled by the unique high-power laser and electron beam facilities at the Accelerator Test Facility. In addition to supporting his cutting-edge research, Professor Vafaei-Najafabadi’s Early CAREER Award grant will help establish math and physics programs for undergraduate students — particularly underrepresented minorities — at Stony Brook. This initiative will help students build the foundation needed to excel in graduate plasma physics.

The funding received through NSF’s Early Career Awards will allow Dreyer and Vafaei-Najafabadi — and all recipients — to advance the mission of their departments more efficiently.

“Receiving an Early CAREER award is a defining moment of any junior faculty’s career as it represents highly selective recognition of not only the recipient’s accomplishments but also future potential,” said Chang Kee Jung, distinguished professor and chair of the Department of Physics and Astronomy. “Thus, it warms my heart to see Cyrus and Navid receiving the award. Both are dedicated to undergraduate education and early research involvements besides excelling in their own respective research, and are also wonderful citizens of the department and university. The Department of Physics and Astronomy is blessed to have Cyrus and Navid as well as other fantastic junior faculty members.”

The Faculty Early Career Development (CAREER) Program is a Foundation-wide activity that offers the National Science Foundation’s most prestigious awards in support of early-career faculty who have the potential to serve as academic role models in research and education and to lead advances in the mission of their department or organization. Activities pursued by early-career faculty should build a firm foundation for a lifetime of leadership in integrating education and research.