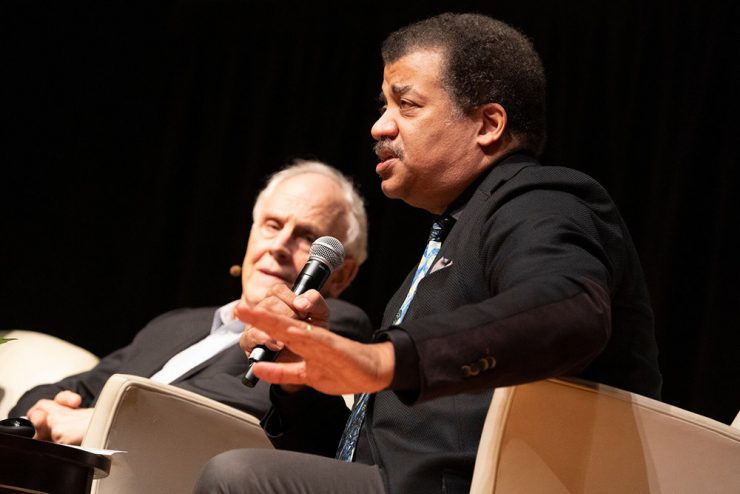 Science is one of the most powerful tools we have for meeting the challenges that face humanity. However, a worldwide increase in misinformation, denialism and anti-science movements has undermined efforts to address critical concerns like climate change and the recent COVID pandemic.

On April 12, five of the most respected physicists in the world gathered at the Staller Center for the Arts with more than 900 people in attendance to address the issue and discuss education, society and the future of science in a panel discussion titled, “Celebrating Science in a Fractured Society.”

Moderated by Clifford Johnson, professor in the Physics and Astronomy Department at the University of Southern California, the event was sponsored by the Della Pietra Family in conjunction with the Simons Center for Geometry and Physics and Stony Brook University.

Stony Brook University President Maurie McInnis noted that the panel reflected the open-minded, engaged and multidisciplinary spirit that is celebrated at Stony Brook.

“We’ve seen great innovation in science and technology, including knowledge and treatment that has lessened the impact of the pandemic,” said McInnis. “At Stony Brook, we’ve made breakthroughs in computing, engineering and the creation of quantum technology for the future. But we’ve also seen numerous setbacks — a lack of trust in science and a lack of commitment towards making progress on some of our most urgent issues. Because of that, the subject of today’s panel is especially critical.”

Gross, recipient of the 2004 Nobel Prize in Physics, expressed surprise at the current attack on science and concern moving forward. “I expected the world to be gung-ho for science after the pandemic, where science accomplished the miracle of creating a vaccine which allows most of us to sit here without masks,” he said. “But that has not turned out to be the case. And this is a great concern to the scientific community and should be of great concern to everyone. How do we deal with that?”

“An important thing for people to understand is that scientists are people, and science is about connection,” said Gates. “It’s neither conservative nor liberal. It seeks a balance. We have to maintain this very precise balance in order to advance science.”

Jackson spoke of challenges at the NRC in restoring public trust in nuclear science and nuclear power in the wake of the disasters at Chernobyl and Three Mile Island. “We held public meetings and listened to community concerns,” said Jackson. “After that, we increased transparency and introduced a sounder approach to regulation that still exists to this day. If people don’t have confidence in the technologies they worry about, it’s hard for them to have confidence in the science that undergirds it.”

Jackson added that anti-science sentiment — and even anti-vaccine sentiment — is not new. “But in this case the blessing is also the curse,” she said. “Social media allows for things to propagate much more quickly and allows for a greater cacophony of voices. We don’t totally understand where the tipping point is within social networks. When something takes hold, it’s very hard to unwind.”

Tyson, however, pointed out a benefit of social media. “Something I noticed in my social media following is that you might think you’re in a tussle with just one other person, but it’s in full view of thousands and in some cases millions of other people,” he said. “There were many battles I didn’t have to fight simply because other people who participate in the scientific enterprise who understand what it is and how and why it works join the battle. I’ve been very happy with what I’ve seen there.”

Gross cited the ongoing climate change discussion as an example of science winning in the long term.

“We used to say that climate change was just a liberal fantasy, and now a lot of that has gone away,” said Gross. “Why is that? Because science made the point over and over, with lots of data. We haven’t given up and eventually we showed the connection between scientific analysis and prediction projection to the future and what’s actually happening. And that has been reinforced by recent weather occurrences. That’s a success story. But how do we do that with respect to vaccines? We present facts, but some people don’t believe those facts. So we have to just continue to make the case. Eventually, truth wins because it’s true.”

“There are always two sides to every story,” said Gross. “You can have a scientific controversy where 99 percent of science and all the respectable journals are on one side, and a few dissenters are on the other. That’s true of every issue. I noticed that in recent years, partly due to Donald Trump’s efforts to discredit journalism, the media think they have to present both sides with equal value. And it’s not just random, crazy ideas that get amplified. There’s manipulation by politicians, special interests and others.”

The panelists contemplated the road that has led to this point, and Tyson called out the role elementary education has played. “Children are taught to memorize, but they’re not being trained,” he said. “But science is a way of querying nature. It’s a way of coming to understand something you didn’t previously know. It’s a way to recognize when the data are convincing, and when they’re not. That training is not happening in K–12.”

Gates described his efforts to address this challenge at the college level through a course he is teaching at Brown that was created by Leon Cooper, a Nobel Laureate in physics. “He envisioned a course that spoke to non-science majors about the essential nature of science,” Gates said. “And that does not mean teaching people facts. It means teaching people that even in science and even in mathematics, there’s an element of faith. Science is a human activity, and that is best pursued when we are not seen as disconnected from the rest of humanity — from its history, from its politics, and even from its religions at some level. We must establish the connection to these things that are foundations of human civilization.”

Tyson said that that search for truth is what underpins all science communication efforts.