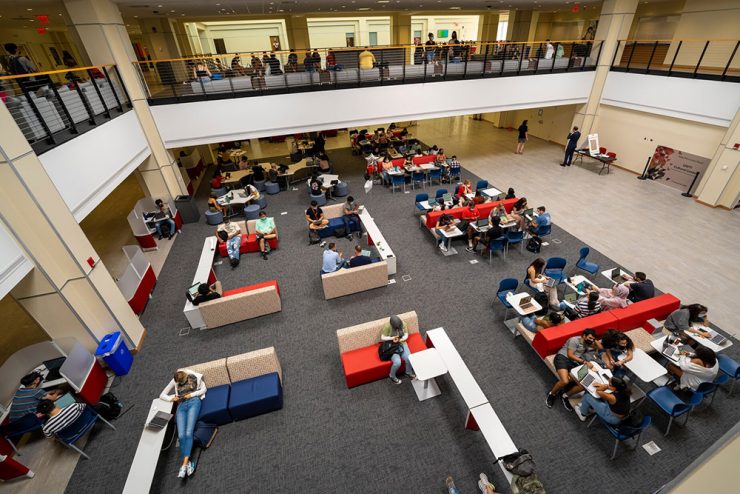 It is said that patience is a virtue. For a community that waited three years while the Stony Brook Union was being remodeled, and another year while the COVID-19 pandemic prevented large gatherings, that patience was finally rewarded — and by all accounts, it was worth the wait.

On August 26, one year after its completion, the Stony Brook Union’s doors officially opened with a ribbon-cutting ceremony and celebration. The Seawolves Marching Band kicked off the ceremony and Dean of Students Ric McClendon welcomed those in attendance, citing the importance of the Union as a centerpiece of a diverse campus.

“When it opened in 1970, the Union symbolized the rapid growth of our institution and its meteoric rise in both reputation and ability to serve a dynamic and diverse range of students,” McInnis said. “In times of tumult and tension during the pandemic year, I watched our campus join together to reach a point of understanding, empathy, and constructive dialogue. I watched individuals challenge their own notions of learning and tradition in order to work toward a greater good. The new Stony Brook Union is a cornerstone in this effort.”

The original Stony Brook Union, which opened in January 1970, was described at its inception as a facility “designed to meet the cultural, recreational and social needs of students,” and would take over social functions previously served by Pritchard Gym. It became the first campus building designated specifically for student life.

“Starting in 1970 and continuing to the mid-90s, the SB Union functioned as the ‘living room’ of the campus, providing recreation, dining, meeting rooms and gathering spaces for student organizations and others,” said Norm Prusslin, director of the media arts minor and faculty advisor to student media at Stony Brook. “There’s a lot of history here. People like [Rock and Roll Hall of Famers] Jackson Browne and Bruce Springsteen performed here early in their careers.”

The 170,000-square-foot, three-level building was originally slated for maintenance and an extensive refurbishing in 2015, but the project expanded to a complete remodeling. The building’s interior was designed to create unique spaces to accommodate the requirements of dozens of campus and faculty groups, while the exterior was reimagined to deliver a look and feel that melds university tradition with contemporary architecture.

The result is a modern, multi-use destination in the heart of the campus designed to accommodate more than 40 different student and faculty groups.

The comprehensive renovation reinforces its function as a site of centralized services, programs and initiatives, providing a holistic campus experience. The facility was designed specifically to meet current students’ needs, and houses student services offices as well as student life resources and programs, including space for clubs.

“This space will encourage new clubs and enable existing clubs to be better,” said Helena Van Nieuwenhuizen, a PhD student in the Department of Physics and Astronomy and speaker of the Graduate Student Organization Senate. “I’ve already seen the sense of community it brings. Its first role was as a COVID vaccine center, and earlier this year I stood with faculty, staff and community members to get the vaccine.“

“After waiting a long three years it was all worth it,” said Singh. “The Student Union is a place where students feel a sense of connection. This is the place on campus where students will be exposed to the immense cultural, social and professional experiences that Stony Brook has to offer. I’m sure that many stories of students meeting their college best friend or getting involved in a club they love or experiencing new diversity will stem from the Student Union.”

“I’m a junior and the Union has been under construction the whole time I’ve been at Stony Brook,” said Heather Waszmer, ’23, a civil engineering major. “This is the first time I’ve gotten to experience it.  It’s a logical space to house the clubs and it’s great having the tutoring center and lounges here.”

The Brain Box is a wellness initiative that Campus Dietitian Laura Martorano developed for finals week to combat the damage that stress can cause to our bodies. She used the new trend of themed box kits to incorporate...

The 31st annual closing ceremony took place via Zoom this year, marking the end of a month-long celebration that honored the University’s Latin American and Hispanic communities.