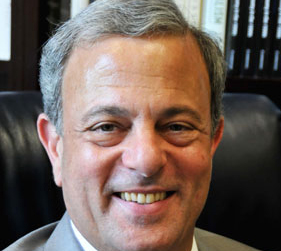 Bernstein, the John Christie Barr Professor of History and Economics and Provost of Tulane University from 2007 through July 2016, will join SBU as the University’s chief academic officer effective October 31, 2016.

“I’m very excited that Dr. Bernstein has decided to join Stony Brook University,” said President Stanley. “Under Dr. Bernstein’s leadership as Provost at Tulane both the STEM disciplines and the liberal arts flourished, benefiting from his keen ability to understand and help meet the distinct needs of the whole research university.”

“His experience at Tulane, and in his leadership positions at UCSD, including chair of the faculty senate — among his many other accomplishments — lends a unique and diverse perspective, and I am looking forward to his contributions and leadership,” Stanley said.

Highly qualified to lead SBU in the fulfillment of its academic mission, Bernstein received his PhD (1982), MPhil (1980), MA (1978) and BA (1976) in Economics, all at Yale University. His teaching and research interests focus on the economic and political history of the United States, macroeconomic theory, industrial organization economics, and the history of economic theory. Bernstein succeeds Dennis N. Assanis, who left Stony Brook on June 30 to become President of the University of Delaware.

As chief academic officer, the Provost is responsible for oversight of the academic mission of west campus, providing direct supervision for all academic units, support services and operations, and coordinating all academic programs. The deans and directors of the colleges, schools, libraries, centers and institutes, other than those in the Health Sciences Center, report to the Provost.

The Provost works closely with the Senior Vice President of the Health Sciences Center/Dean of the Medical School and the Vice President for Research with regard to academic and research issues that concern the University as a whole.

Prior to his tenure as the Chief Academic Officer at Tulane, Bernstein was at the University of California at San Diego (UCSD) for two decades, where he served as the Dean of Arts and Humanities and as a Professor of History, a department he chaired for six years. He also served as Chair of the Academic Senate of his home campus while at UCSD, and participated in the work of the UCSD Chancellor’s Diversity Council, the Advisory Board of the UCSD Women’s Center, the Advisory Committee of the UCSD Office of Sexual Harassment Prevention and Policy, and of the Chancellor’s Committee on the Status of Women.

About Michael Alan Bernstein
Professor Michael Bernstein’s teaching and research interests focus on the economic and political history of the United States, macroeconomic theory, industrial organization economics, and the history of economic theory. His publications explore the connections between political and economic processes in modern industrial societies, as well as the interaction of economic knowledge and professional expertise with those processes as a whole.