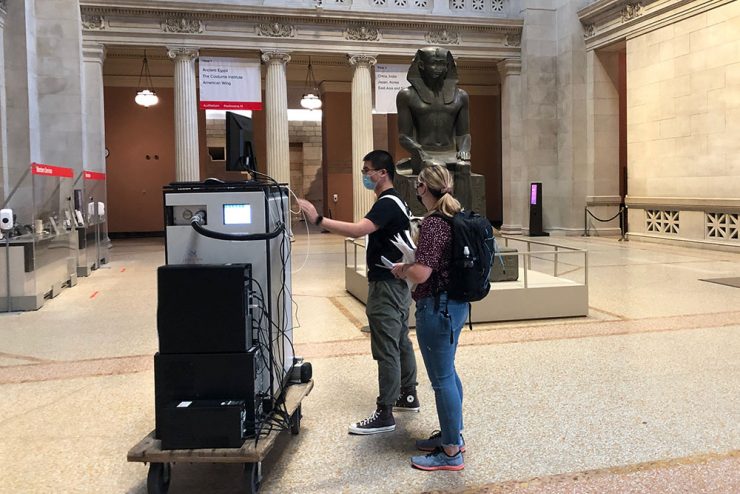 The Metropolitan Museum of Art’s cavernous halls and exhibition spaces were empty and silent when a small group of people entered the Egyptian wing with a 500-pound scientific device on a cart. They cracked open the case surrounding one of the mummies, turned on the device and stuck a probe near the 3,000-year old cat.

The scientists were there to learn more about the air within the cases, and at the Met in general. One day earlier this year, a team from Stony Brook University’s School of Marine and Atmospheric Sciences (SoMAS) and the world-famous art museum traversed the halls and exhibition spaces, measuring what compounds were in the air and in what quantities.

“The question the Met was asking is, do the cases that are holding these priceless collections of mummies to 18th century British ceramics release compounds that might be damaging somehow to those collections?” said SoMAS Professor John Mak. “We took our instrument to the Met when it was closed to the public, and we spent the whole day collecting samples in different galleries and halls.”

The display cases that hold the priceless art and artifacts in the Met are, of course, designed to protect the art from visitors who might otherwise be unable to withstand the temptation of touching or coming too close. But they are far more than plexiglass and glue; the cases themselves are carefully engineered so that they do not emit gases that may react and harm the art.

“We always try to vet the manufacturer’s materials before the cases are installed, but we still want to know if the case is off-gasing. If it is off-gasing, what chemicals are coming off and are they harmful to the art?,” said Eric Breitung, a physical organic chemist who leads the Met’s preventive conservation science lab. “My job is to make sure that those materials aren’t damaging to the art and that they’re not going to prematurely degrade the art.”

Off-gassing, also known as out-gassing, is a naturally occurring process. It happens any time a material or compound changes and emits a smell or a volatile chemical that may or may not be harmful on its own. Off-gassing is the reason new cars have that distinctive smell, emitted from the various plastics, foams and other materials used in building the car. It’s also why perfumes and pine forests give off their own distinctive aromas. 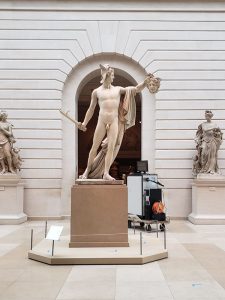 The Met’s team of scientists wanted to learn whether or not some of their newer cases were off-gassing, so they approached Mak for help. Mak is one of the only researchers in the Northeast with a proton transfer reaction mass spectrometer, an instrument that can collect real-time measurements of organic air-borne molecules.

Earlier this year, Mak and two of his graduate students, Cong Cao and Julia Marcantonio, in the School of Marine and Atmospheric Sciences; and Roisin Commane, assistant professor of earth and environmental sciences at Columbia University, spent the day traversing the Met taking measurements in display cases and in the public spaces. They concentrated most of their time in the Egyptian wing, as well as the storage and display areas for collections of 18th and 19th century ceramics and silver.

The Met is one of very few museums in the United States to employ chemists and other scientists to help preserve and protect their collections. The idea, Breitung says, is to implement large-scale practices to help offload some of the painstaking efforts of the conservators.

“Conservators work on one piece at a time, and it can take years. We have wonderful conservators at the Met and they do incredible work, but the fewer things they have to interact with the better for the artwork,” Breitung said. “Anytime you handle or have to do something to the art, you have the risk of harming it, and you’re also intervening with the original object, which is never ideal.”

It will likely take several months for Mak and his team to analyze the data and understand what is happening in the cases and hallways of the Met when no one is around. From there, Mak says he would like to go back to the Met to take measurements when the building is open to visitors, to compare the data.

“We can measure many dozens of compounds down to parts per billion or less. The next step is to figure out what we’re looking at. There are specific compound classes that are interesting, such as acids, alcohols and aromatics. We should be able to quantify certain species in each class. If our observations are useful, they would be interested to have us back,” Mak said.

Mak has spent his career studying air quality and seeking to expand humanity’s understanding of how compounds and air-borne materials interact with one another, and the impact of those reactions on people and the environment. As interested as he is in the science, he said walking the empty halls of one of the world’s leading museums was one of the more memorable moments of his life.

“I’m just stoked they reached out to us. When I was a kid, I studied all of these ancient civilizations. To be able to stare at these collections with nobody there, to not be rushed by crowds or distracted by voices, was incredible,” Mak said. “I’ve camped at the South Pole. I’ve flown my single engine airplane to Honduras and Nicaragua. Going to the Met when it’s empty is right up there.”