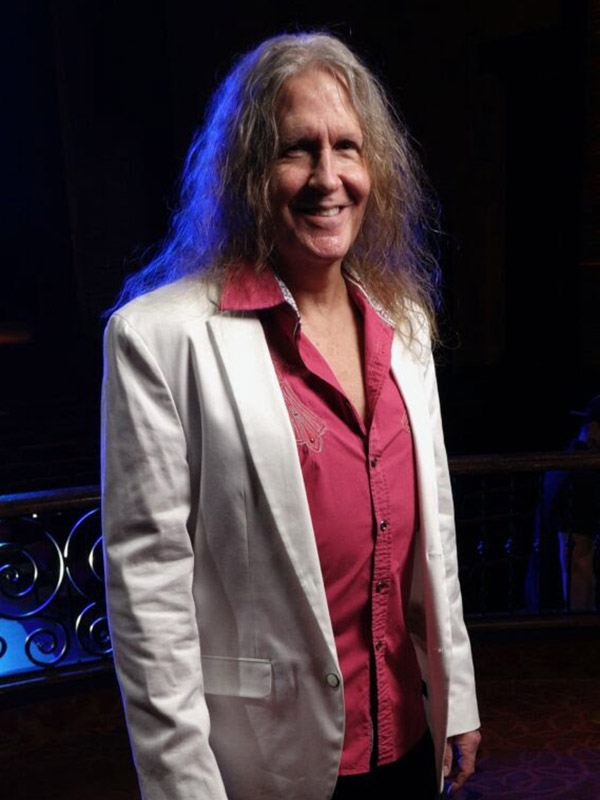 Randy Jackson, guitarist and vocalist of the rock band Zebra, was recently presented with the Shirley Strum Kenny Student Arts Festival Partner Award in recognition of his decades of contributions to the Stony Brook University community.

The Partner Award is presented each year to an individual or non-profit media- or arts-related organization not directly affiliated with SBU, who through their participation on campus support our students and the improvement of campus life.

Due to COVID restrictions, Jackson virtually accepted the award in April from Norm Prusslin, director of the Media Arts Minor and a faculty member in the Department of Theatre Arts at Stony Brook. He visited the campus to receive the award in person in November, taking the opportunity to speak to Prusslin’s Honors College Arts and Society class (HON 201) afterward.

In an hour-long discussion, Jackson shared the story of Zebra’s rise from a local act in New Orleans to a New York band that recorded the fastest-selling debut album in the history of Atlantic Records up to that time, and a successful 40-year career in the challenging music industry. Zebra’s success resulted in the band being inducted into both the Louisiana Music Hall of Fame in 2010, and the Long Island Music Hall of Fame in 2012. Jackson also answered students’ questions ranging from how to put together a band and the songwriting process to music publishing and navigating the industry.

Jackson’s relationship with Stony Brook began in the 1980s when he visited the studios of WUSB, Stony Brook’s non-commercial FM station. It was a natural union facilitated by his success as a recording artist and Stony Brook’s rich music history.

“I’ve been connected to Stony Brook longer than I can remember,” said Jackson. “The first time I was ever here I went to WUSB and did an interview. I come back from time to time to promote my music and I’ve been doing that for more than 30 years now.”

Jackson has also visited the children’s ward at Stony Brook University Hospital to perform for patients, something he feels very fortunate to be able to do.

“I love performing for them and it’s a great thing that works both ways,” he said. “It’s a nice way to give back, I get enjoyment out of it, and it cheers them up too. I’m grateful to receive this award. I live nearby and it’s very, very fulfilling to be recognized like this in your own community.”

“Randy originally received the Arts Festival Partner Award this past April, though we had to do it virtually at the time,” said Prusslin. “It’s a pleasure to be able to give it to him in person. He’s been a regular guest to my classes and WUSB as well as the hospital. He’s been part of so many LI benefit events and he’s always the first one to give his time. It’s an honor to recognize the long-time contribution he has made to Stony Brook.” 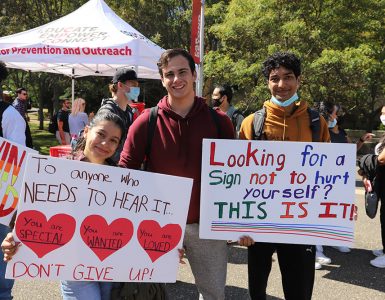 Stony Brook University’s Center for Prevention and Outreach (CPO) successfully hosted its fourth annual Walk of Hope in honor of Suicide Prevention Month in September.  The Walk of Hope was just one of many different...