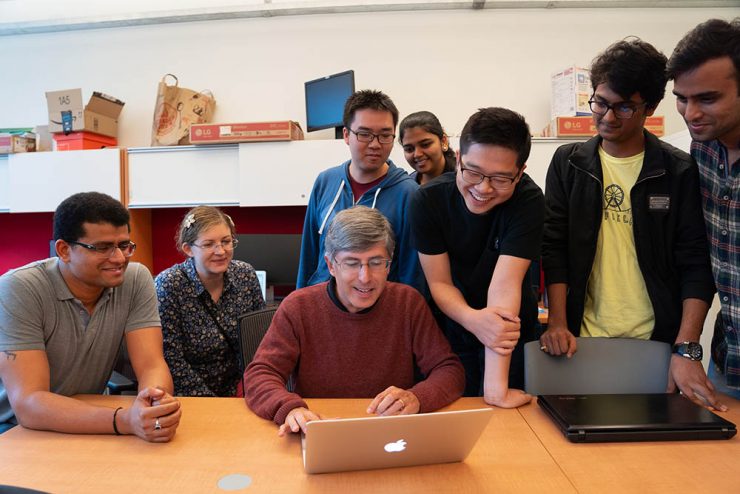 “Smart” concrete that can predict structural repairs before they’re needed.

Nanobots that can stimulate the brain to cure degenerative diseases such as Alzheimer’s or Parkinson’s.

Programs that scan medical records to identify when someone needs an appointment.

These revolutionary developments in artificial intelligence — better known as AI — are the work of Stony Brook researchers. They’re on the cutting edge of a transformative industry that is accelerating so quickly that it’s touching on almost every aspect of our world, from how we learn to how we live and work, said Fotis Sotiropoulos, dean of the College of Engineering and Applied Sciences (CEAS).

Stony Brook University has taken on the challenge of understanding AI’s implications while harnessing its potential, leveraging the powerfully trending technology to create groundbreaking changes in research and development. These innovations reach across every discipline, from the medical to business schools, while also redefining how the University is approaching preparing students for the future.

“We’re at a time when things are changing so fast, it’s impossible to predict what’s coming down the road. The best we can do as a university is to be part of inventing the future,” Sotiropoulos said. “We need to be constantly engaged, drive the conversation forward and be agile and responsive to changes quickly.”

To advance AI research on campus and beyond, the Institute for AI-Driven Discovery and Innovation was founded in 2018 within the CEAS to serve as an intellectual hub to coordinate and encourage faculty AI research and educational initiatives across the University.

Steven Skiena, Distinguished Professor in the Department of Computer Science, who is director of the Institute, said that the University’s focus is on AI applications in medicine, smart environments and infrastructure.

Among the many research projects in development is computer vision analysis being used in the Department of Ecology and Evolution to take a worldwide census of penguins.

At the College of Business, AI research is being used to analyze investment opportunities such as cryptocurrencies. Other Stony Brook projects include detecting real “fake news” through AI and algorithms, as well as collaborations with psychologists to analyze social media platforms such as Facebook for signs of depression among its users.

AI research projects such as these raise important societal questions, prompting atypical collaborations between the departments of Computer Science and Philosophy to work together to offer courses in ethics for AI systems.

“This is about how to encode ethics into a computer program,” Dean Sotiropoulos said. “AI systems are only as good and as unbiased as the data used to train them. If you have used data that have implicit biases in them, the AI system will produce the same biases because they don’t know any better.”

To Skiena, this is another example of the important collaborations offered through the Institute. “I am impressed by how quickly machine learning and AI are getting integrated all over the campus; there’s clearly a lot of interest in it.”

These efforts are centered on the overarching vision of human-machine symbiosis, based on the idea that AI technology should amplify human intelligence instead of replace it.

“By leveraging their respective strengths to compensate each other’s weaknesses, the human-machine partnership becomes mutually beneficial and far more potent at problem-solving than what either can do in isolation,” Skiena said.

A perfect example of this symbiosis is in cancer diagnosis, where the error rate drops significantly when AI and human analysis are used in tandem.

Skiena said another focus of the Institute is machine learning — the technique of recognizing patterns in data to help build models for predictions, classifications and potential cures for diseases.

By example, some CEAS faculty are creating “smart” concrete to embed computing devices that act like neurons, sharing information about the condition of roads and bridges.

In addition, the Department of Neurobiology & Behavior is working with electrical engineers and computer scientists to develop nanobots, devices that can compute information that stimulates the brain to cure degenerative diseases such as Alzheimer’s or Parkinson’s.

“Among the areas we cover in AI are natural language processing — like speech recognition systems — and computer vision, which can include image and video analysis,” Skiena said. “We’ve had tremendous progress in recent years in building systems that learn from data and start to do things that people historically thought of as requiring intelligence to do.”

The group focuses on digital pathology methods that make it possible to detect patterns in tissue studies to make better treatment plans for cancer.

“We use AI to extract information from pathology cancer studies that could not be obtained through human observation,” Saltz said. “The intent is to use the AI-derived pathology information in conjunction with molecular and radiology studies to better target cancer therapies, as well as to improve consistency of pathologist interpretations. We also do work on AI and electronic health records to help with the analysis of healthcare data.”

Another goal of the Institute is preparing students to respond to the jobs of the future, when they’ll have to interface with intelligent machines.

“We must go beyond the traditional silos — computer science, engineering, humanities, business — and create opportunities to educate students across all fields and all socioeconomic backgrounds to have a basic understanding of how to work with AI systems,” said Sotiropoulos. “This fusion of skills and the ability to think creatively is really going to help our students to be able to participate in the technology-driven economy of the future.”

Skiena said the University already has a community of core AI researchers in computer science, engineering, humanities and medicine. But to continue to meet the evolving academic demands of AI, the Institute is in the process of hiring several “superstar” faculty through the SUNY Empire Innovation Program, a state-funded grant program dedicated to recruiting world-class instructors.

“Two years from now, SBU will be increasingly recognized as one of the world leaders in machine learning and AI,” he said.