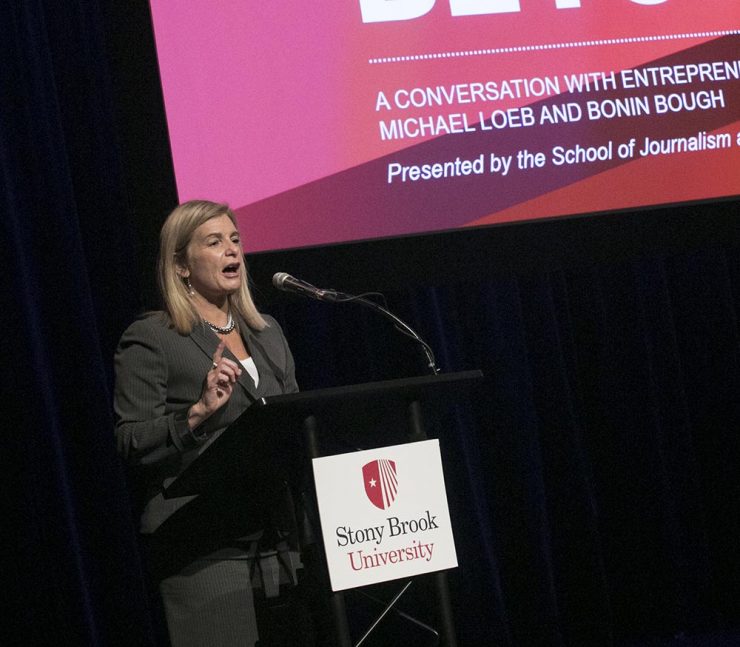 Laura Lindenfeld, Professor of Journalism and Executive Director of the Alan Alda Center for Communicating Science, has been appointed Dean of the School of Journalism, effective immediately. She has held the Interim Dean position since January 2019.

“Laura has demonstrated herself to be a highly effective leader in that time, establishing a comprehensive strategic vision and developing new programmatic opportunities for the School of Journalism,” said Minghua Zhang, Interim Provost for Stony Brook University. “As a communication researcher, her work draws inspiration from the idea that we can make better, more informed decisions about how we shape our collective future.”

The Stony Brook School of Journalism was established in September 2006. It is the first and only Journalism School in the SUNY public higher-education system. In addition to undergraduate and graduate programs, the school includes the Center for News Literacy and the Marie Colvin Center for International Reporting. Both centers aim to educate the next generation of journalists and arm them with the necessary tools needed to communicate effectively throughout their potential careers in the field.

Dr. Lindenfeld came to Stony Brook in 2016 as the Executive Director of the Alan Alda Center for Communicating Science, which helps scientists, researchers and healthcare professionals learn to communicate their complex work effectively through professional development programs that combine improvisational theater exercises and message-design strategies. During Dr. Lindenfeld’s tenure as executive director, the Alda Center expanded its communication training offerings, developed a robust research agenda, and began to offer certificate programs to Stony Brook graduate students. She will continue to serve as the Center’s Executive Director where she oversees a dynamic organization that has trained 15,000 researchers worldwide and introduced more than 50,000 people to its work and mission.

Much of Dr. Lindenfeld’s research has focused specifically on environmental and sustainability communication. She has sought to help us understand how we can support effective stakeholder engagement, build strong interdisciplinary teams, and communicate science more effectively. Her research has been supported by the National Science Foundation, the National Oceanic and Atmospheric Administration Sea Grant Program, the U.S. Department of Education, and the U.S. Department of Food and Agriculture.