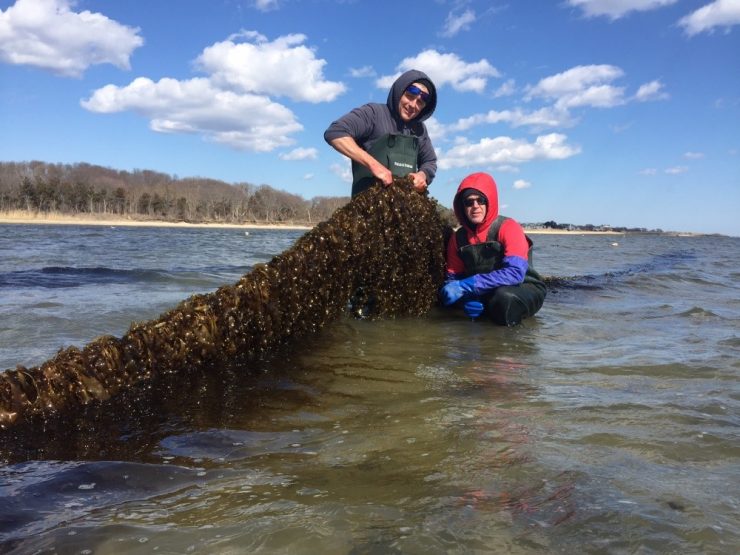 STONY BROOK, NY, May 25, 2022 – While kelp is known as a nutritious food item for sea creatures and humans alike, harvesting kelp may be a new way to help keep bivalves such as clams and oysters – a more common food source and marine industry staple – healthy and more abundant. A new study led by Christopher Gobler, PhD, and a team of scientists at the Stony Brook University School of Marine and Atmospheric Sciences (SoMAS) shows that the presence of kelp significantly reduces ocean acidification, a result of climate change.

Published in Frontiers in Marine Science, the study also demonstrated that the deployment of kelp on an oyster farm nullifies ocean acidification and therefore protects bivalves against acidification. The process may also have additional ecosystem and aquaculture benefits, including the sequestration and extraction of carbon and nitrogen, and protection against harmful algae blooms.

For shellfish, one of the most serious climate change-related threats is ocean acidification. Carbon dioxide or CO2 levels in Earth’s atmosphere continue to rise, infiltrating oceans where it causes chemical reactions that lower pH and cause ocean acidification. For the past two decades, one of the most robust conclusions of ocean climate change research has been that increasing levels of CO2 in surface waters threaten shellfish that rely on higher pH waters to grow and survive. This threat is particularly acute in coastal zones where additional sources of acidity can further reduce pH and slow shell formation in shellfish, especially bivalves. And while many wild populations of bivalves have collapsed, a burgeoning wave of aquaculture in the U.S. and around the World has caused the global production of seafood via aquaculture to grow and now exceed wild capture.

“Despite this wave of aquaculture, the intensification of ocean acidification now threatens bivalve aquaculture and has necessitated a solution,” explains Professor Gobler, the Endowed Chair of Coastal Ecology and Conservation at SoMAS.  “We believe our work is foundational to a solution.”

In each of the experiments, acidification was significantly reduced with the cultivation of kelp. They furthered the research with the ultimate test – a field experiment at the Great Gun oyster farm in Moriches Bay, New York.

They found that during a one-month deployment, oysters that were surrounded by kelp enjoyed higher pH water and grew significantly faster than individual shellfish located further away where the pH of the water was significantly lower.

Professor Gobler and colleagues emphasize that these findings have powerful implications for oyster farming in coastal zones.

“We have been witnessing coastal ocean acidification for years and have documented its ability to slow the growth, and even kill off, shellfish. We began growing kelp on oyster farms to simply expand aquaculture, regionally. After seeing its ability to rapidly take up CO2 and improve low pH conditions, we knew it had the potential to benefit shellfish experiencing acidification. And while showing that in the lab was exciting, being able to improve the growth of oysters on an oyster farm experiencing coastal acidification proves this approach can have very broad applications,” explains Professor Gobler.

Overall, the research clearly shows, according to the authors, that “the cultivation of kelp constitutes an environmentally friendly means of protecting shellfisheries against present and future ocean acidification and other coastal stressors.”

Building on the work, helping the oyster farms

“We’ve helped grow kelp on 10 oyster farms across New York since 2018 and more and more aquaculturists have been hoping to incorporate kelp into their farms,” says Mike Doall, Associate Director of Shellfish Restoration and Aquaculture at Stony Brook University. “In addition to providing crop diversification and additive revenue streams, the ability of kelp to fight ocean acidification gives these oyster farmers one more reason to add kelp as a second crop.”

The recent study builds on other research by the same SoMAS group, which published a study in Harmful Algae in 2021. That study demonstrated that kelp has the ability to deter the intensity of harmful algal blooms, another environmental threat to shellfish aquaculture.

Such scenarios with kelp appear to create a win-win scenario for oyster farmers like Paul McCormick, owner of the Great Gun oyster farm where the current study was performed.

“Kelp looks to be the perfect complement to oysters on my farm,” says McCormick. “It grows during winter and spring, when the oysters need less attention, and there is lots of interest in kelp from restaurants. If it is offering protection to my oysters against poor water quality, well that’s another good reason to add it to my farm.”