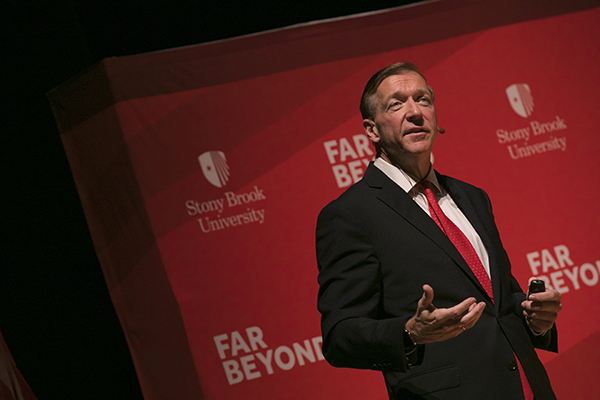 Stony Brook University President Samuel L. Stanley Jr. delivered his ninth State of the University address on Wednesday, expressing appreciation to administrators, faculty and staff for their hard work and dedication and reinforcing the University’s commitment to excellence and innovation.

After acknowledging elected representatives and public officials in attendance, and members of the Stony Brook Council, President Stanley shared the past year’s highlights and milestones, including completing the most successful fundraising campaign in SUNY’s history. He spoke of Stony Brook’s increasingly positive impact on Long Island’s economy, the year-over-year rise in student enrollment and graduation rates, and an expanding Stony Brook University Hospital landscape. 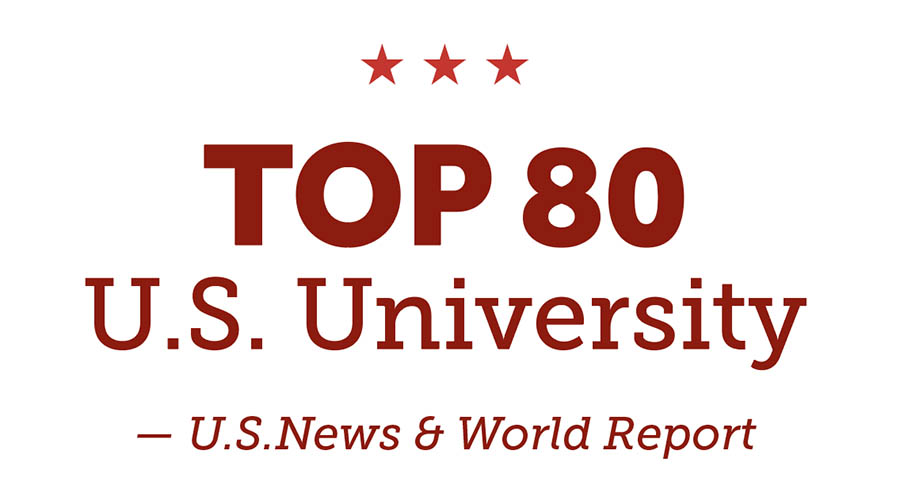 President Stanley said that the University’s reputation for excellence in research and discovery among faculty and students is growing and pointed to Stony Brook’s recent surge in national rankings as evidence. Among other accomplishments, he talked about a 14 percent increase in the number of faculty-submitted research proposals from fiscal year 2017, as well as a 6.7 percent increase in sponsored research expenditures.

These successes, he said, are possible thanks to the commitment and generosity of the community of faculty, staff and donors. The Campaign for Stony Brook raised $630 million as of June 30, exceeding its already ambitious goal by $30 million, he explained. Funds were raised through the support of nearly 48,000 donors, including more than 5,000 faculty and staff. 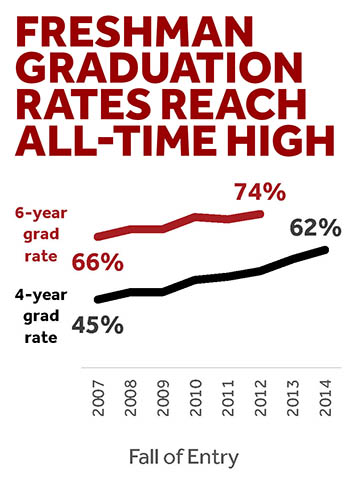 “What we’re able to do thanks to the support of our donors is spectacular,” President Stanley said. “It’s important to note that 98 percent of the money raised will be directly allocated toward specific projects our donors specify — that could be a scholarship for an undergraduate student, additional funding for a research project by one of our scientists, an endowed faculty position or even a new facility on campus. We appreciate so much the amazing ways that people choose to invest in Stony Brook.”

Referring to them as “the heart and soul” of the University, President Stanley also celebrated Stony Brook’s students, calling special attention to the 2018 graduating class — one of the largest and most diverse in its 61-year history. The 7,272 graduates received 4,435 bachelor’s degrees — a record high for the University.  More than 90 percent of these graduates are either employed or continuing their studies in graduate programs at this point in the year.

In addition, President Stanley announced that four-year graduation rates at Stony Brook have jumped by 17 points, from 45 percent (class entering in 2007) to 62 percent (class entering in 2014). He said that Stony Brook has narrowed the graduation gap between male and female students — it now stands at just 11 percent, down from 16 percent in 2014. This is a result of a culmination of efforts since President Stanley attended the White House College Completion Summit in 2014, during which he made the commitment, on behalf of Stony Brook, to raise the four-year graduation rate to 60 percent.

That goal was met thanks to the community of educators and administrators and led by the Office of Undergraduate Education. Together this group confronted head on the most pressing issues students face in their journey to on-time graduation.

“We also have the Finish in 4 Grants Program, which was started in spring of 2015, in which we assist a student who is about to complete their studies but is confronted with personal matters that prevent it,” President Stanley said. “This fund is in place to help them complete their studies, and to date we have helped 54 students, with a nearly 100 percent graduation rate.”

The increased graduation rate was one of a number of factors that have helped earn Stony Brook accolades on the national stage. This year, Stony Brook saw a surge in its national rankings, showing the greatest gains in the University’s history. Stony Brook was named a Top 40 Public University and a Top 80 University in U.S. News & World Report’s 2018 rankings. 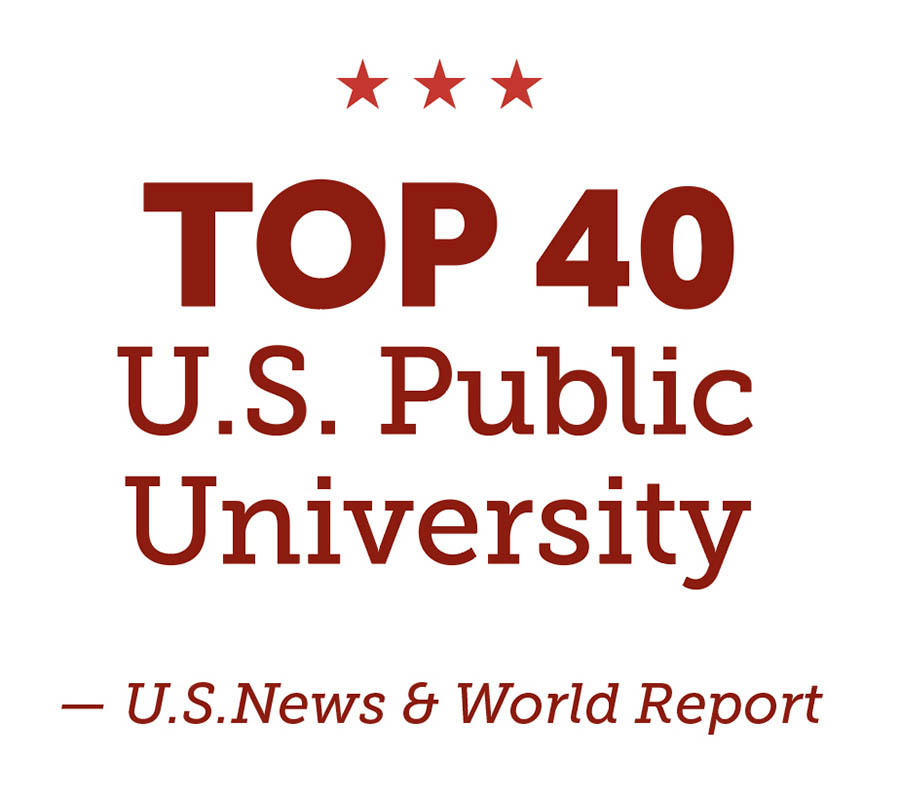 “The increased rankings are fantastic news. No one number defines the quality of a university, but we know that students and parents pay attention to these numbers,” President Stanley said. “I know we’ve had a lot of challenges in the past year, but I think these rankings and the recognition we receive show that people are seeing Stony Brook as a vital, impactful institution that is doing things that other institutions are not — and ultimately, that represents the hard work everyone is putting in.”

The President also highlighted that this winter Stony Brook University Hospital will be cutting multiple ribbons, including for the Medical and Research Translation (MART) building — which will house a new, state-of-the-art Cancer Center — as well as Stony Brook Children’s and Hospital Pavilion, and The Phillips Family Cancer Center in Southampton. 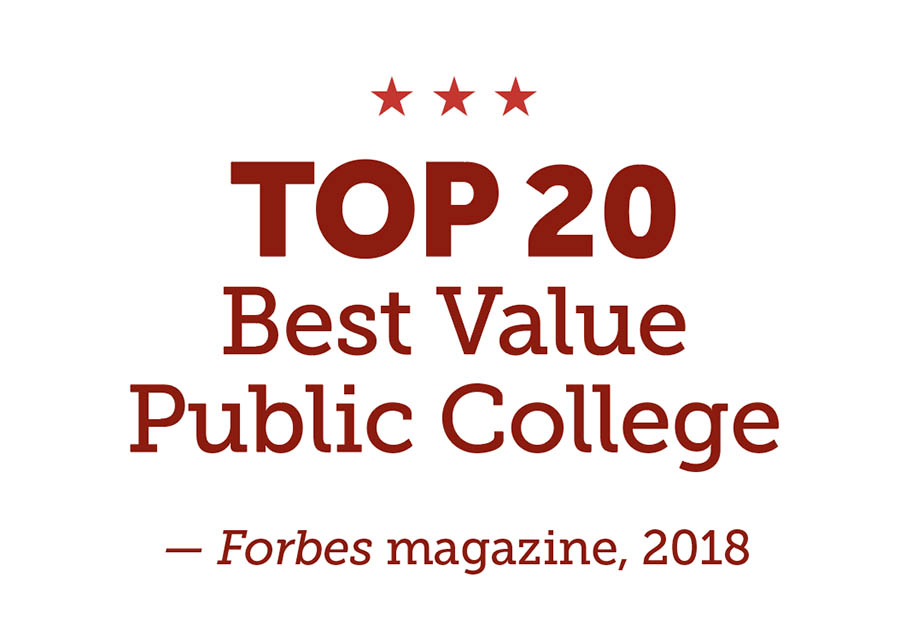 At the close of his address, President Stanley honored the audience for the daily contributions they make to Stony Brook.

“It’s always gratifying when we are recognized for those goals that are part of our core DNA as a University. I believe that is a great motivator for us to continue to excel in the work that we do,” President Stanley said. “The things I hear from people in the community have the same message: They see us doing things differently — generating scholarship and research that changes the world, increasing our graduation rates and providing advanced healthcare to the region that makes a difference in people’s lives on a daily basis. All of those things represent the hard work and effort you’re putting in, and I look forward to working with you again in this coming year.”