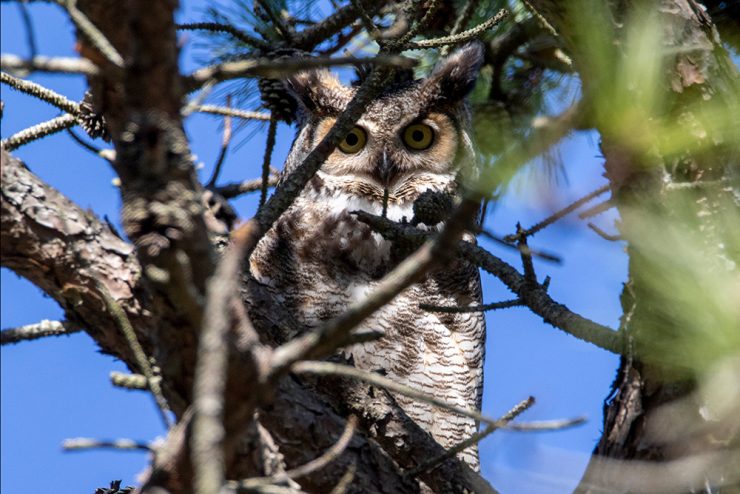 Great horned owls nest much earlier than other birds in our area. Females will typically start sitting on eggs by early February, and they will hatch 30 to 37 days later. Great horned owls do not build nests of their own. Rather, they use nests that were previously built by other animals such as red-tailed hawks, crows, and squirrels (all of which do not nest this early in the season). Tree cavities, dead snags (branches), cliffs and manmade structures can also be used as nest sites. Using a pre-existing nest is advantageous, as the owl will not have to expend energy to build a nest. A disadvantage is that the nest might not be big enough to support the hatchlings as they grow.

By early spring the eggs have hatched, and the owlets grow quickly. At approximately six weeks of age (sometimes much sooner especially if the nest is not large enough to contain them), they will begin to explore the area around the nest. Hopping from branch to branch, they are often referred to as “branchers.” During this time, it is very common for them to fall from the tree and end up on the ground. When this happens, the parents are never far away. The adults will keep a watchful eye as they continue to feed and defend their young from any predators that might be encountered.

Marisa Jeffers, director of student life at the Southampton campus, had also been hearing the “hoo-h’HOO-hoo-hoo” by the dorms and she was confident that the calls were consistently coming from a particular pine tree on the edge of the main lawn. Maybe this was where their nest was located? It was obvious that owls had been using this tree at some point, as there were many owl pellets at the base of the tree. These thumb-sized pellets are regurgitated and contain indigestible parts from an owl’s previous meal. I scoured the treetop with binoculars looking for a possible nest and at the very top, I spotted a small cluster of leaves about the diameter of a basketball. It was most likely the remnants of an old squirrel’s nest, but it did not seem big enough for an owl’s nest.

I stopped by the tree daily to inspect for any owl activity and one particular morning as I approached, I was greeted with several loud owl alarm calls and clicks. When I looked up, a pair of great horned owls swooped in and landed in a tree above my head. They yelled louder and louder the closer I got to the tree. I had been in a similar situation a few years prior, so I immediately turned my attention to the ground. When I walked around to the backside of the tree, there sat a great horned owlet. This little puffball must have been exploring and fell from the top of the tree.

As I previously mentioned, owlets falling from the nest is a common occurrence. In these situations, mom and dad are more than capable of defending their offspring. With razor sharp talons, a foot that expands to 4”x 8”, and which requires a force of 28 pounds to open once they lock onto an object, there are few predators they cannot fend off. Unfortunately, this little one was close to the highway and I was concerned that its next adventure might take it into the road.

I called the Evelyn Alexander Wildlife Rescue Center in Hampton Bays for some assistance in re-nesting the owlet. They put me in touch with Joe Rocco from The Broken Antler, who they had been working with to re-nest great horned owls, 15 owls this year alone.

A re-nesting plan was quickly put into motion. Joe arrived at campus with the bottom half of an old plastic dog crate and some scrap pieces of lumber. Instead of a shaky ladder, I contacted Jimmy Greene from SBU facilities who brought us a boom lift truck that safely lifted us approximately 30 feet to a section of the tree that split into two branches. Within 15 minutes, Joe secured a makeshift nest to the tree and lined the bottom with leaves and pine needles.

Even though I was holding the owlet some distance from the work zone, the female owl continued to swoop over the heads of Joe and Jimmy. Maybe there was another owlet at the top of the tree? We searched the best we could, but never located another chick.

Once the new nest was constructed, I was raised in the boom with the little owlet and carefully placed it in the new nest. The mission was a success! The next morning not only was the owlet in the box, so was mom. It seemed as if everyone was well adjusted to the new living arrangements.

Two weeks later, Joe informed me that he has another owlet, but unfortunately, this one’s parents are nowhere to be found. He says it is about the same age as the university’s owlet and asks if he can place it in our nest. He has had success placing orphans in other nests and this was the best chance his owlet had to remain wild. I agreed and we added it to the nest.

Mom and dad adopted the orphan and over the next couple of weeks, both owlets appeared to be doing good and growing at an amazing rate. To our surprise, there was in fact another owlet higher up in the original nest. This one stayed well hidden among the tangle of branches, but it was obvious that it was being well fed.

At roughly week seven, the owlets are fully feathered and capable of short flights. Due to the proximity to the road, the nest was spotted by some passerby photographers. The added daily “paparazzi” activity around the nest caused the owlets to depart the area much sooner than I would have liked, but when the “kids” leave the nest, we are never really ready for it.

Campus life can be quite hectic at times. Racing from class to class, we often do not take the time to slow down and appreciate the wonderful wildlife that surrounds us. This great horned owl experience was just one of many wildlife encounters I have had while on the campuses of Stony Brook University. Eagles, peregrine falcons, turkeys, box turtles, bullfrogs, red fox, white-tailed deer and a harbor seal are just some of my other highlights. To quote Ferris Bueller, “Life moves pretty fast. If you don’t stop and look around once in a while, you could miss it.”