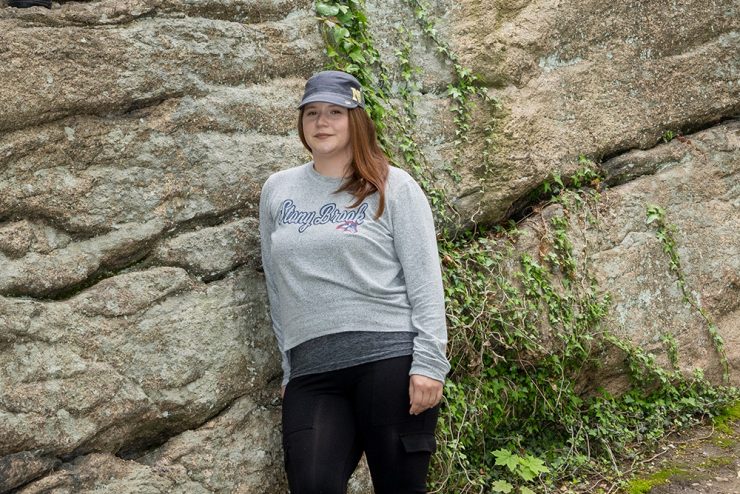 Graduate student Johnnie Paola Cullinane has found another home at Stony Brook University, one that presents much-desired challenges while making her feel like she belongs.

Studying for a master’s degree in Human Resource Management (HRM) in the School of Professional Development (SPD), Cullinane, who is from Floral Park, NY, graduated from John Jay College with a bachelor’s degree in forensic psychology. She considered becoming a police officer or enlisting in the military, and looked into both extensively, taking the Suffolk County and NYPD exams while contacting Navy and Air Force recruiters.

“The moment that changed everything was when I walked in to the Navy recruiting office,” she said of the turning point in early 2014. “A sense of peace washed over me, and I knew that is where I belonged in that moment.”

After completing basic training, Cullinane attended the Defense Language Institute Foreign Language Center in California, spending the next year learning Persian-Farsi as a cryptologic technician interpretive (CTI) in training. There she would meet her future husband, also a CTI, who was studying Korean.

Cullinane graduated with excellent scores in reading and listening Persian-Farsi at an advanced level, and spoke at an intermediate level. She graduated and then completed her apprenticeship as a cryptologic linguist at Fort Gordon in Augusta, GA. After one year, she and her husband were stationed in Hawaii and they started a family, with “three beautiful little boys.”

“Having children definitely made my experience in the military different than what I thought it would be when it all started,” she recalled. “It certainly changed the direction I thought I was going in, which was to retire in the service. But I am so glad that I was able to serve my country, and still do so in the Naval Reserve, while also be present in my children’s lives, especially at their very young stages of life.”

Cullinane said she is grateful to continue developing as a professional in SPD while still being able to have a positive effect on the lives of those around her.

“Much like how I knew the Navy was the right choice back in 2014, SBU has allowed me to experience that same peace of mind as an HRM graduate student, where I already feel more equipped to handle the next set of challenges a new career has to offer,” she said.

Cullinane was impressed with Stony Brook’s course listing and program, and it was her one and only choice. She credited Susan Russo, the assistant director of the program, helping her navigate her course load as a mother who was, at the time, pregnant with her third child.

“She has been so warm and welcoming to all of my needs that I felt as though she is the kind of professional I want to be,” Cullinane said. “I have had the same experience with Pamela Pfeil, assistant director in the Office of Veterans Affairs, who has become a mentor to me as another veteran and working mother who also strives to give back to others, especially veterans and their dependents.”

Cullinane plans to finish her degree by the end of spring next year, and pursue another master of science in either clinical psychology or organizational psychology.

Cullinane, whose parents are from Puerto Rico, said that being a linguist in the Navy taught her the importance of passing down heritage languages to the next generation, and said it is her and her husband’s mission to continue teaching their children Spanish first.

“I feel lucky to experience both the magic of American culture, which is made up of so many cultures, and the wonderful and lively culture of being a Latina in the United States,” said Cullinane, adding that her four-year-old speaks Spanish beautifully, while her two-year-old “is on the same path, but for now mostly only feels comfortable with other Spanish speakers.”

“This is where my thoughts of language being a unifier become prominent in my mind,” she said. “It transcends the issues of race and stereotypes and can join people in ways that I have only seen the love of food do.”

The Spring 2022 issue of the Stony Brook University Magazine is online and shining a light on the many ways that the university and its faculty, staff, students and alumni inspire others to set their ambitions high...