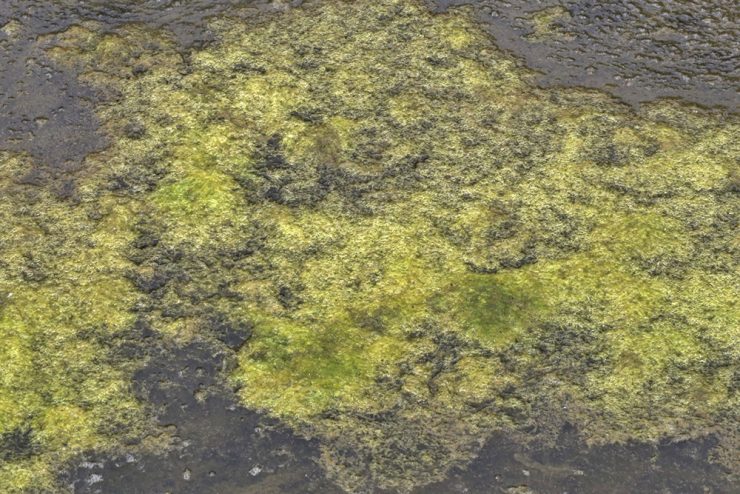 Lake Agawam in Southampton Village has recently looked more like pea soup than the pristine body of water that it has been for so many years.

Dense algal blooms have affected the lake since 2003, according to the 2017 Lake Agawam Water Quality Study prepared for the village by Christopher Gobler, Endowed Chair of Coastal Ecology and Conservation at the School of Marine and Atmospheric Sciences (SoMAS). But a new approach, combining two technologies that have shown some success on their own, may solve the problem.

The New York State Department of Environmental Conservation deployed three ultrasonic devices on floating solar-powered buoys onto the lake on April 14. The devices monitor water quality while emitting ultrasonic waves across the top layer of water. The sonic waves impact the buoyancy of algal cells, which respond by sinking into the water and eventually dying without light to support them.

This summer, phase two of the algal attack will employ hydrogen peroxide, a method that Gobler has tried in his own lab. A study published last summer by Gobler and Mark Lusty, a senior research technician in the Gobler Lab, demonstrated that hydrogen peroxide administered at a moderate dose consistently inhibits cyanobacteria, or blue-green algae, and promotes the growth of eukaryotic algae, primarily green algae.

Cyanobacteria produce a range of toxins known as cyanotoxins that can pose a danger to humans and animals. People who come in contact with the bloom may experience a range of medical issues, from nausea to skin irritations to difficulty breathing.

Blue-green algae occur naturally in low numbers in lakes and ponds, but can morph into a harmful bloom thanks to an overabundance of nutrients in the water, blamed by most researchers on aging septic systems and fertilizer runoff.

The hope is that the sound waves combined with the hydrogen peroxide will cut down the algal blooms that have overrun the lake in the last decade.

How bad has it been?

According to the water study, the DEC began monitoring blue-green algae blooms in lakes across the state in 2013, and in the next four years, no lake had more frequent algal blooms than Lake Agawam.

Governor Andrew Cuomo announced his Harmful Algal Bloom action plan for the state in 2017. In 2018, the lake was coated in the densest growth ever recorded in a Long Island water body, measuring hundreds of times the Environmental Protection Agency’s thresholds for harmful conditions.

While other methods have failed, this new two-pronged approach, which had never been tried before, came about as a result of conversations between Gobler and the DEC.

Gobler noted that these approaches are being piloted in parallel with long term efforts to reduce nutrients from land, and as such are viewed as short-term measures to protect public health from toxic algae.

“I will say a second important premise is, ‘Do not harm,’” Gobler added. “Both of these approaches are known to have few if any unintended consequences. Beyond, that we knew each approach was somewhat, but not completely, effective on its own. Hence, we wanted to do something that has never been done: Trying both concurrently.”

The experiment has received the support of local stakeholders, such as the Southampton Village Board, the Town Trustees and the Lake Agawam Conservancy.

“We are thrilled to have the DEC here for this exciting project,” said Southampton Mayor Jesse Warren after the buoys were deployed. “This is an important week for the environment and the well-being of our village community. Come July or August, we are optimistic residents will be able to see a visible decrease of algae, and we are grateful for the brilliant folks at the DEC and Gobler lab who will help us to measure the percentage of improvement.”

In 2019, the village, working with the county and state, deployed a mobile harvester to the lake that separated algae from water and returned the clean water to the lake.

“On paper, we think this could be an ideal solution,” Gobler said, adding that they won’t know for sure until the summer, when conditions tend to deteriorate without intervention.