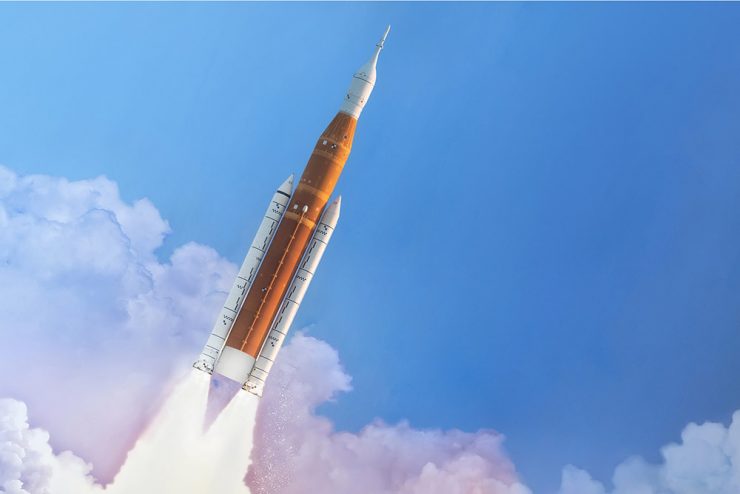 The Moon’s south polar region is of special interest to scientists because of the occurrence of water ice in the permanently shadowed regions (PSRs) around it. Craters in this region are scientifically important because sunlight has never reached their interior and they contain a fossil record of hydrogen, water ice and other volatiles — chemical elements and compounds that can be readily vaporized — dating from the early solar system.

International efforts are underway to explore this region rich with possibilities, designed to develop a sustained lunar presence. As part of the effort, Stony Brook’s Nandita Kumari, a fourth-year graduate student in the Department of Geosciences, College of Arts and Sciences, contributed research that helped identify potential landing sites for NASA’s Artemis mission.

The first mission, Artemis 1, is an uncrewed mission around the moon that launched the morning of November 16, a mission NASA and scientists like Kumari hope could provide unique insight into potentially sustaining life on the moon and elsewhere in the universe.

In Summer 2020, after earning an engineering degree in her native India, Kumari came to Stony Brook and began a virtual internship with the Lunar and Planetary Institute (LPI) / NASA Johnson Space Center, working on the Diviner Lunar Radiometer team with renowned planetary scientist David A. Kring.

“He’s trained astronauts and worked on the Apollo samples,” she said. “Around the time of my internship, he was working on south pole landing sites that could be of interest for the Artemis program.”

The connection with Kring opened a door of opportunity for Kumari. Working with students from the University of Arizona, University of California, Los Angeles (UCLA) and University at Buffalo, the group was asked to select landing sites they wanted to research. Kumari conducted a preliminary analysis on several sites and picked two because of certain features she found interesting.

“One project site was intended to find ways to maximize scientific output, which means identifying locations from which we can collect diverse samples while exploring the smallest number of locations,” she said. “So we were basically evaluating the geologic diversity of a site. The second project was identifying hazards, because once you land there you need to know what to expect.”

Using high-resolution data available from the Lunar Reconnaissance Orbiter, the group created mosaics mapping all the rocks present and modeled the geological diversity of the site.

“You need rocks on the surface because they make it easier to sample,” said Kumari. “You can only collect so much Moon dirt. So you need rocks, but you need just the right amount. If there’s a large density, you can’t move through them.”

NASA put out a proposal call asking researchers to submit sites they thought would be good landing spots. Kumari’s LPI mentor submitted her group’s research sites and to her surprise, both were included in the 13 sites NASA ultimately selected.

Kumari is mentored by Timothy Glotch, a professor in the Department of Geosciences and principal investigator of the Remote, In Situ, and Synchrotron Studies for Science and Exploration 2 (RISE2) node of NASA’s Solar System Exploration Research Virtual Institute. While her PhD research focuses on understanding the composition of the Moon, Kumari is also interested in the PSRs, which have remained in shadow for billions of years and have never seen sunlight. These areas may hold secrets regarding the formation and evolution of the Moon.

“We don’t know what lies inside them since we can’t see them,” she said. “So we try to understand those regions by looking at the surrounding areas because whatever lies around them will have some impact on whatever lies inside it. These PSRs can be an important link in finding out about the existence of water.”

“Nandita’s work on the potential Artemis landing sites, which shows the safest and most scientifically interesting spots to land and explore, is a great service to NASA,” said Glotch. “Her work on the Diviner Lunar Radiometer team is providing new, quantitative ways to map the composition of the moon using a data set that is more than a decade old. It’s a real testament to her skills as a scientist.”

The first three phases of the Artemis mission will be to the Moon and back; the last two phases are Moon to Mars. The first crewed mission to the moon is currently slated for 2024, with missions to Mars intended by the 2030s. Kumari said that if more far-reaching space exploration is to be done, scientists will need to leverage the resources available on the moon.

“We need to see if there are in situ resources, we can’t carry everything from the Earth to the Moon,” she said. “Eventually we’ll have to find resources there and utilize them. But for scientific purposes, since these PSRs have remained in darkness for billions of years, they have collected volatiles for billions of years. Exploring them will help us understand how these evolved. Was there water?  If so, is the structure of the water we see today the same way billions of years ago?”

Kumari said the goal of her research is to better understand how we think about the Moon and the possibilities that exist beyond. She hopes that samples brought back might shed some light on the mysteries the Moon holds.

“There is a lot of debate about the presence of water on the Moon, how the public thinks about it, and how scientists think about it,” she said. “And even within the scientific community, you have factions thinking about water in different ways. The more samples we have, the more clarity will come.”

As for the future, Kumari said a typical career path would have her continuing her research or becoming a professor. And though she doesn’t discount either of those possibilities, she said it’s important to her to be a role model for women in India.

“Women in India are really smart, and I think they don’t realize their potential,” she said. “I want to do something towards that. I want to make them realize how smart and strong they are. And if I can do it via this academic journey and encourage more women and people of color to go into STEM fields, I would love to do that.”

The Stony Brook University Center for Italian Studies has announced that the 17th annual Robert D. Cess Concorso d’Eleganza Annual Celebration of Italian Vehicle Excellence and Beauty will be held on Sunday, September...