In 2015, Sonia Harmand and Jason Lewis, archeologists from Stony Brook University, uncovered a site in northern Kenya that contained the earliest known examples of human technology. The site on the western shore of Lake Turkana in northern Kenya, named Lomekwi 3, contained artifacts of stone tools dating back 3.3 million years, meaning our ancestors were making tools some 700,000 earlier than previously thought.

A recent half-million-dollar grant from the French government will help Harmand and her team at the Turkana Basin Institute (TBI) continue the legacy of that important work, this time by improving access to palaeosciences training and career opportunities for young women and marginalized populations in Kenya, while also raising awareness among the Kenyan public of the value of its prehistoric archaeological heritage.

Harmand, an associate professor of anthropology in the College of Arts and Sciences, is the director of the project, “Consolidating the Future through Mastering the Deep Past” (ConFMap), financed by the French Ministry of Europe and Foreign Affairs through the Solidarity Fund for Innovative Projects. It is a collaboration between the French Embassy in Kenya, the National Museums of Kenya, TBI and the recently founded Turkana University College in underserved northwestern Kenya.

The grant funds a new master’s program in human evolutionary biology at Turkana University College, as well as five full scholarships for Kenyan women who enroll in the program. It also funds the creation of an exhibition in the Nairobi National Museum that showcases the archaeological work being done at the 3.3 million-year-old prehistoric site Harmand and her team discovered, as well as its importance to archeology and human origin sciences overall.

“We already have two students from Kenya who entered PhD programs here at Stony Brook this year,” Harmand said. “That’s a beginning, but we’re hoping that the master’s program we’re funding is going to generate more and more interest, and that we have more Kenyan scholars taking it. This could give them a great opportunity then to transition to PhDs anywhere else in the world, preferably here at Stony Brook, because we are here for them.”

Harmand said she and her team of 45 researchers and excavators from Kenya, the United States, the United Kingdom and France spend around two months together each summer working on the excavation of their groundbreaking sites in West Turkana. They study the deep past of our origins, the earliest technology in human evolution. The remains and fossils that Harmand and her team excavate are mainly sharp stone tools and animal bones.

Harmand has been working in Kenya for nearly 25 years. “I started my PhD there with a professor in France,” she said. “Then, I got my first job as a researcher in France in 2009, and became director of the West Turkana Archaeological Project in 2012.”

The Turkana Basin Institute was founded in 2005 by the late Richard Leakey, with the intention of creating a year-round research facility in the Turkana Basin region of Kenya. Harmand was invited personally by Leakey to join the TBI faculty at Stony Brook in late 2012.

More than anything, Harmand encourages anyone with an inkling of interest in archeology or the paleosciences to start by reaching out and having a conversation with someone in the field. “The opportunities will come from the contacts they make with the archeologists working in the field,” she said. 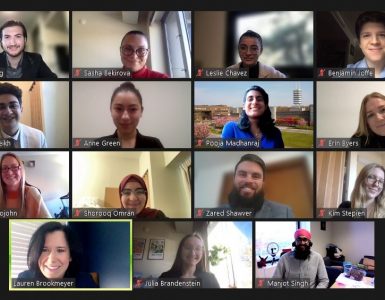