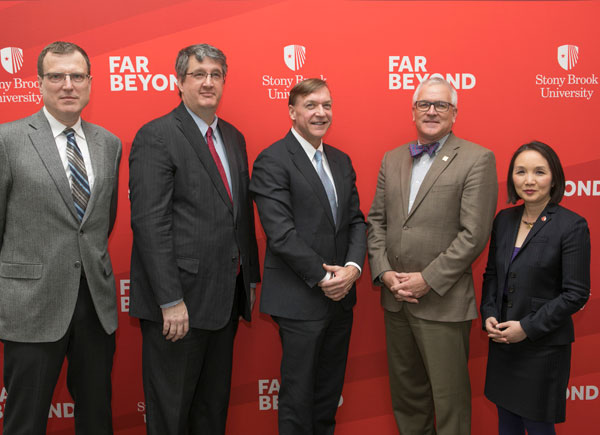 “This connection supports Stony Brook’s regional leadership position in high-performance computing, while advancing our goal as a top public research university to educate and train future generations of scientists,” said President Samuel L. Stanley, Jr. “I’m looking forward to the many new possibilities this connection will offer for interdisciplinary collaboration, an essential element behind the expansion of our expertise and our success in science, technology, engineering and mathematics as well as in the social sciences and humanities.”

The 100 Gbps connection is so fast that Stony Brook researchers could transfer a complete copy of a human genome file to a lab for testing in just 90 seconds, send 300,000 X-ray images in one minute, or download one e-book for every Stony Brook student (roughly 26,000) in only four seconds.

While the faster transfer rate helps expedite Stony Brook’s scientific, engineering and medical research efforts, the 100 Gbps connection will also enable research that could not be done without such a high-speed connection.

“It’s very important for Stony Brook research to have our infrastructure match our aspirations,” said Robert Harrison, director of the Institute for Advanced Computational Science (IACS). “Data’s big and messy, and if you’re going to share it or use it, you have to be able to move it — that’s why this connection is essential for us to continue to play our lead role.”

Harrison is also a Stony Brook professor, and was recently named the chief architect of a national effort led by the Department of Energy to improve the scale, performance and portability of high-performance computational chemistry.

As a theoretical chemist, Harrison uses big computers to predict properties of molecules and chemicals through quantum physics, which in turn helps scientists design new clean energy technologies, such as new generations of solar cells and sustainable energy storage solutions.

Other areas of research that will benefit from the 100 Gbps connection immediately include computational astrophysics, in which scientists simulate the explosion of stars, which produces very large quantities of data, and biomolecular imaging, which uses very data-intensive experiments across several areas on campus, including biochemistry, pharmacological science and neurobiology.

The new high speed connection, which is currently accessible to students, faculty and staff who conduct research using either the SeaWulf or LI-red high-performance computational clusters operated by the IACS, builds the necessary foundation to link additional research locations on campus at high speed in the future, including the Research & Development Park. Several teams worked together to make this possible, including the New York State Education and Research Network (NYSERNet), Hewlett-Packard Enterprise, the IACS and the Division of Information Technology (DoIT).

“We’re excited to provide this new capability to campus research activities,” said Melissa Woo, chief information officer and vice president for information technology. “More possibilities for discovery and invention are now available to Stony Brook through our faster Internet2 connection, made possible by the NYSERNet.”

“NYSERNet has done many innovative things, such as building several generations of networks,” said Chris Sedore, president of NYSERNet. “We’re looking forward to the next chapter of this high-speed networking world, and who but Stony Brook would lead us forward with a 100 Gbps connection.”

Chair of the Department of Computer Science Arie Kaufman is also the project director for Stony Brook’s Reality Deck, the world’s first immersive gigapixel resolution display, which is located at the Center of Excellence in Wireless and Information Technology. Virtual pancreatography is one of many ways the Reality Deck is used, enabling doctors to examine biopsies of the human pancreas in search of potentially malignant growths.

“This leap to 100 Gbps will allow us to conduct some of our experiments in real time, which is critical when deciding whether or not a patient’s biopsy is cancerous while they’re in the operating room,” said Kaufman. “Whether the biopsy is done here at Stony Brook, or anywhere in the country, we need this kind of high speed connectivity to transfer and look at the huge images and amounts of data.”

The new connection will also be a benefit to state and regional industries and the economy through the New York State High Performance Computing Consortium (HPCNY), which includes several other research institutions across the state. By partnering with industries, HPCNY members provide expertise and resources in computational science to expand and accelerate the development of new products.