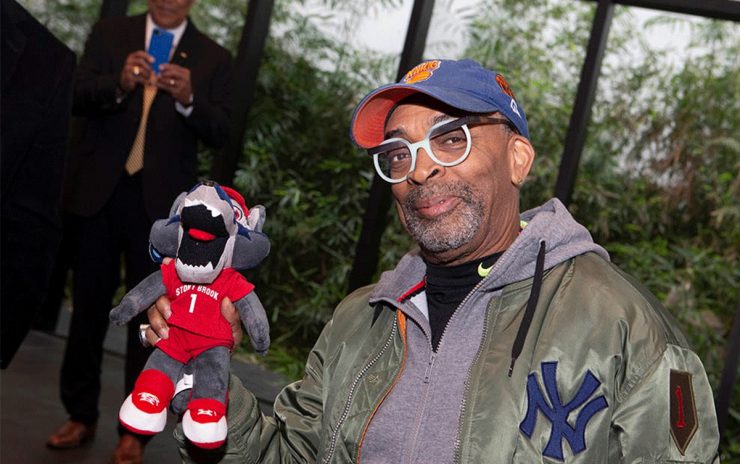 Addressing an enthusiastic full house, the filmmaker began his talk by referencing the previous night’s State of the Union address, observing that there is little to joke about on today’s political scene and urging young people to register to vote. He then spoke about the effect that history told from the perspective of the powerful has had on the black community.

“We hear about George Washington being the ‘Father of Our Country’,” Lee said. “You don’t hear that Washington was a slave-owner. One of the things that has kept the black community from being unified is that we have been fed lies.”

Lee cited the portrayals of Africans and Native Americans as savages in Hollywood movies, and how the experience of those distortions would influence his career as a filmmaker.

“When I decided to make films, I wanted to show truth,” Lee said.

For more than four decades, Lee’s award-winning films have focused on race relations, discrimination in the black community, the role of media in contemporary life, urban crime and poverty, and other cutting-edge issues. He revolutionized modern cinema through daring and memorable films such as She’s Gotta Have It, Do the Right Thing, Jungle Fever, Malcolm X and Summer of Sam. In 2019 he won the Academy Award for best adapted screenplay for his film Black KKKlansman.

Lee told the story of losing funding after he refused to compromise the film Malcolm X with substantial cuts demanded by the studio.

Refusing to back down, Lee secured the financial help of celebrities including Prince, Janet Jackson, Tracy Chapman, Oprah Winfrey, Magic Johnson and Michael Jordan to maintain creative control over the film.

“My whole life I had to fight through things like that,” he said. “That was just another example of what I had experienced. There was no question of what I had to do.”

Malcolm X, clocking in at well over three hours, was released in November, 1992 to critical acclaim, and in 2010, was selected for preservation in the United States National Film Registry by the Library of Congress as being “culturally, historically, or aesthetically significant.”

Lee also described the importance of being born into an artistic family that did not try to discourage him from pursuing his calling.

“Parents kill more dreams than anybody,” he said. “I was blessed that my family didn’t look at me like I was crazy when I said I wanted to be a filmmaker. It’s not a good thing to have to get up in the morning and go to a job that you hate. I give thanks every night that I get to do what I love. When you do what you love, you win.”

Lee concluded his talk by describing the importance of education in his family.

“My grandmother worked 50 years as a teacher,” said Lee. “She saved her money for 50 years to put me through college, and then film school at NYU, and then fund my thesis film. She knew that education was what was going to lift us out of slavery.”

He sought to pass on that lesson to Stony Brook students.

“You are very lucky to be here,” he said. “Find the right balance and take advantage of everything that’s around you. Don’t let anyone get in the way of what you came here to do.

“Get your books, get your grades, and the rest will come,” he said. “Then get out there and contribute to the world. Can you promise me that?”