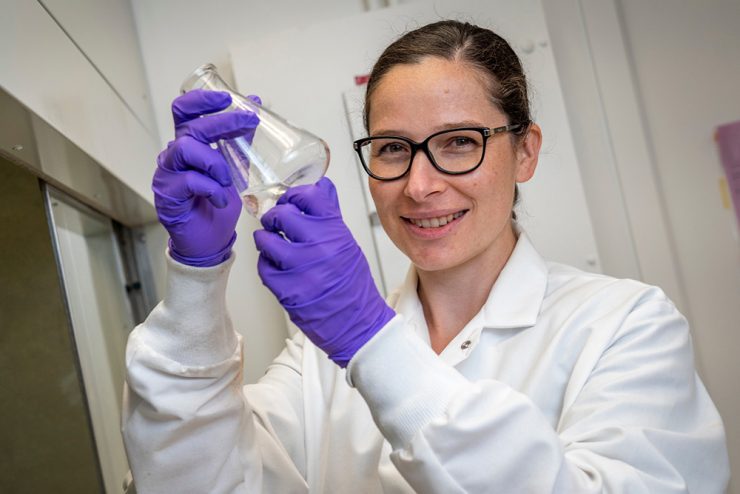 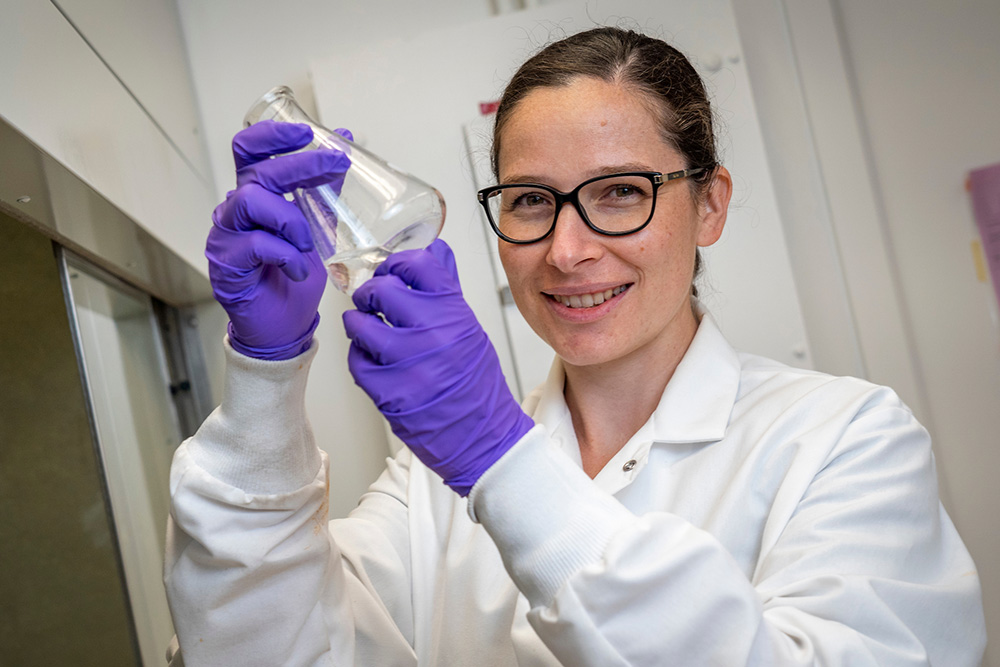 Eszter Boros, an assistant professor in the Department of Chemistry, was announced as the winner of the 2021 Stony Brook Discovery Prize on April 28.

Included with the prestigious award is $200,000 in new funding, meant to spur future funding for her research, which focuses on developing new imaging agents and therapeutics for cancer applications.

Boros’ presentation, “Activation of anticancer drug molecules with a radioactive light switch,” explained her goal to make diagnostics and therapeutics more specific to cancer cells. In the process of developing radioactive imaging agents, Boros’ lab found that radioactive imaging agents produce a small blue light flash, which could be used as a way of activating light activated chemotherapeutics, specifically at the tumor site. Targeting the toxicity of chemotherapeutics in the tumor and nowhere else in the body should lead to better patient outcomes, less side effects and, hopefully, less resistance to chemotherapies.

“I’m very much humbled and incredibly grateful,” Boros said moments after she was announced as the winner. “This is amazing. This enables really exciting science for my research group and my students, who are super excited. I’m very grateful to the Stony Brook Foundation. It’s been a great process that I got to share with three phenomenal fellow colleagues.”

The winning proposal was chosen by a distinguished panel of judges including: Bruce Beutler, MD, winner of the 2011 Nobel Prize in Physiology or Medicine, Regental Professor and Director of the Center for Genetics of Host Defense and the Raymond and Ellen Willie Distinguished Chair in Cancer Research at University of Texas Southwestern Medical Center; Susan L. Brantley, Distinguished Professor of Geosciences and the Director, Earth & Environmental Systems Institute at Penn State University; Sharon Hammes-Schiffer, the John Gamble Kirkwood Professor of Chemistry at Yale University; and James H. Simons, Chairman of the Simons Foundation, founder of Renaissance Technologies and former Chairman of the Mathematics Department at Stony Brook University.

“The Discovery Prize is one of our most important traditions, and especially so in 2021, because although much has changed over the last year of the pandemic, the passionate, committed pursuit of knowledge, research and discovery at Stony Brook University has not,” said President Maurie McInnis, who thanked the four finalists for their resilience, creativity, and willingness to challenge the status quo.

“This is what the best research universities do. They experiment, anticipate and push for the kind of curiosity-driven, forward-thinking and transformative discoveries that will ultimately advance our society in times of opportunity, challenges and need,” McInnis said.

The Discovery Prize was established in 2013 with a generous donation from the Stony Brook Foundation’s Board of Trustees as a way to advance pioneering scientific breakthroughs at a time when the primary source of support for basic research, the government, is dwindling.

It is a pathway to capitalize on new technologies, new innovations, new ideas and the urgency to move discovery-driven knowledge forward by investing private dollars in basic research that is free of commercial or political pressures. The Discovery Prize is also a means to advance the career of a rising star on the Stony Brook faculty whose ideas may be so revolutionary and so contrary to convention that funding agencies would be unlikely to provide support.

The competition also furthers the art of effective science communication through the involvement of the Alda Center for Communicating Science. Each of the finalists worked with the Alda Center’s public speaking experts on how to engage listeners and present their work in a compelling yet academically rigorous pitch.

President McInnis noted that this past year, the world relied upon the research done at universities like Stony Brook to rapidly respond to the COVID-19 crisis.

“The pioneering spirit and risk-taking mentality of our researchers must not be taken for granted,” McInnis said. “The fabric of our world is made up of their work. The very paradigms by which we live and think are the results of big, bold leaps made by researchers at our universities — by people like our finalists today.”

Il Memming Park, an assistant professor in the Department of Neurobiology and Behavior in the College of Arts and Sciences and Renaissance School of Medicine, won the 2019 Discovery Prize for his project, using neurotechnologies and machine learning methods to better understand the brain trapped in unconscious states.

2017 Discovery Prize winner Tom Allison used his funding to collaborate with the Schönhense group at Johannes Gutenberg University, Mainz Germany to install a new electron microscope in his lab at Stony Brook, the first of its kind in North America. Allison later received a $90,000 grant from the Department of Energy enabling him to buy a new hexapod sample manipulator to work with the microscope.

Laurie Krug, associate professor in the Department of Molecular Genetics and Microbiology, was the first Discovery Prize winner in 2014. Her research aims to discover new genes that the gamma herpes viruses need to infect and takeover specific cells. Since winning the prize, she was awarded a National Institutes of Health Small Business Innovation Research (SBIR) grant to further her investigation and its potential applications.

Read more about the four 2021 finalists: 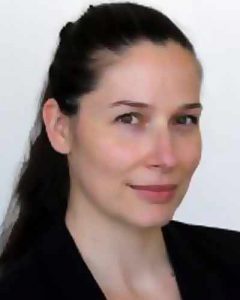 Eszter Boros, PhD, Department of Chemistry
“Activation of anticancer drug molecules with a radioactive light switch”
Stony Brook University Assistant Professor Eszter Boros was trained in inorganic chemistry and radiochemistry at the University of Zurich, where she received her BSc/MSc, and at the University of British Columbia, where she earned her PhD, designing radioactive metal complexes for prospective biomedical applications. In September 2017, Boros came to Stony Brook’s Department of Chemistry. She has courtesy appointments in radiology and pharmacology at Stony Brook Medicine. 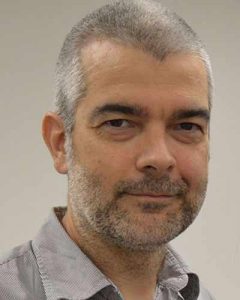 Eric Brouzes, PhD, Department of Biomedical Engineering
“Enabling platform for high-resolution spatial -omics to reveal cell-cell interactions within tissue by sequencing”
Eric Brouzes joined Stony Brook University as a research assistant professor in 2010. After majoring in physics at ESPCI in Paris, he studied the effect of mechanotransduction on the development of fly embryos at the Institut Curie, where he received his PhD. He later pursued postdoctoral studies in the lab of Norbert Perrimon in the Genetics Department of Harvard Medical School.

Gregory Henkes, PhD, Department of Geosciences
“A rare oxygen isotope recorder of continental aridity”
Gregory Henkes is an assistant professor in the Department of Geosciences and is an affiliated faculty member at the Turkana Basin Institute and in the School of Marine and Atmospheric Sciences. Prior to joining Stony Brook University in 2016, he was a postdoctoral fellow at Harvard University, and before that received a PhD in geochemistry from Johns Hopkins University and a BS in biology from Bates College.

Kevin Reed, PhD, School of Marine and Atmospheric Sciences
“Attribution of the human influence on the 2020 and 2021 hurricane seasons”
Kevin Reed is an associate professor in Stony Brook University’s School of Marine and Atmospheric Sciences. Prior to coming to Stony Brook, he was a postdoctoral research fellow at the National Center for Atmospheric Research in Boulder, Colorado, and a science policy advisor in the U.S. Senate through the American Geophysical Union Congressional Science Fellowship. He is a member of the U.S. Climate Variability and Predictability Program Scientific Steering Committee and president-elect of the science and society section of the American Geophysical Union.