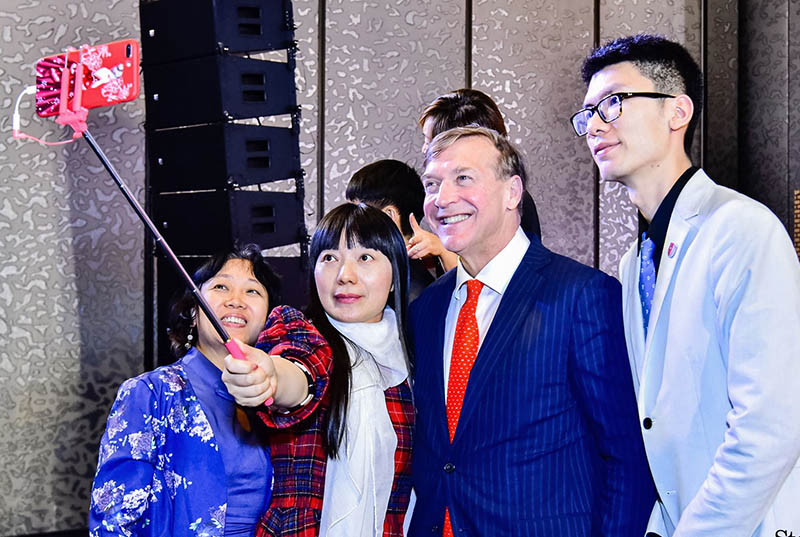 Redoubling its strategic commitment to global engagement, Stony Brook University is ramping up its outreach and recruitment efforts, aided by a battery of tools and tactics now in place to achieve even greater internationalization.

Five years ago, President Samuel L. Stanley Jr. laid out a strategic vision aimed at enhancing the University’s engagement with the world: “Stony Brook University will have a global impact through focused and well-resourced engagements with select international partners in critical areas of education and research, and by increasing the number of students who engage in international programs.”

That vision was triggered by three key factors: the promise of SUNY Korea, a partnership between Stony Brook, the State University of New York and the Korean government; a growing international student population (currently 18 percent); and an increasingly global research presence.

Since then, a steady increase in student mobility, including consistent gains in the numbers of both international students on campus and U.S. students studying abroad, has underscored the importance of the strategy.

In January 2016, President Stanley acted to enhance and consolidate the University’s global initiatives by naming Jun Liu as vice provost for global affairs and dean of international academic programs and Services, with an academic appointment as professor in the Department of Linguistics.

Liu set about transforming the Office of Global Affairs (OGA), with the goal of making Stony Brook a national model in comprehensive internationalization and global engagement.

His efforts are paying off. Stony Brook University recently won the 2018 Simon Award for Comprehensive Internationalization, recognizing academic institutions that have made significant strides in strategic campus globalization efforts.

“The Simon Award is validation that we are on track to realizing our mission,” Liu said.

Outreach to China
One of Stony Brook’s greatest international resources is China. The University hosts more than 2,700 Chinese students, representing the majority of the international student population.

To address the needs of these students, Liu and President Stanley envisioned the China Center, which opened November 10, 2017, in the Charles B. Wang Center.

“The importance of the China Center is huge,” Liu said. “The main mission is fourfold: Recruit more high-quality Chinese students and provide better services for them; establish alumni chapters in Beijing, Shanghai and Guangzhou; deepen partnerships with strategic universities and entities (Stony Brook has developed partnerships with more than 40 over the years); and run short-term training programs.”

The China Center hosts training groups of 10 to 20 people from partner institutions in China, who engage with Stony Brook instructors and attend lectures on specialized topics during their one- to two-week visits here.

Earlier this month, Stony Brook administrators, alumni and educators traveled to China to network with approximately 1,000 prospective students and their parents.

“Notable alumni, grateful parents and motivated students spoke at each of the three events,” Liu said. “Nobel Prize winner C.N. Yang shared his 37-year experience at Stony Brook University with the audience, saying that these years were the highlights of his life. Yang is a national treasure — two of his former doctoral students at Stony Brook have received Nobel Prize recognition.”

Stefan Hyman, assistant provost for enrollment strategies, communications and analytics, said that hundreds of students and family members enjoyed the opportunity to meet President Stanley, Liu and Yang, whose message was carried live via video in Shanghai and Guangzhou.

“Attendance at each event was very strong, with standing room only,” said Hyman. “All who spoke explained the value of a Stony Brook education, and how our university offers a supportive and welcoming environment for international students.”

In the breakout sessions that followed the formal presentations, Hyman spoke with attendees about the enrollment process, academic options, ways to get involved in experiential learning and opportunities to enroll in the Global Summer Institute.

Worldwide Engagement
Stony Brook has more than 160 partner universities worldwide and hosts more than 500 students from international partners every year for short-term exchange programs and various degree collaborations. Robust programs in Kenya, Tanzania and Madagascar are a big part of the University’s global footprint.

“When developing strategic partnerships, OGA looks at three main areas,” Liu said. “First we look at where we are lacking partnerships geographically.” Liu said his analysis has resulted in increased emphasis on India, Latin America and Southeast Asia.

A second strategy is to deepen existing partnerships in areas of interest. “In China, for instance, we established joint institutes in areas such as sustainable energy and global health with the goal of fostering research collaborations and faculty exchanges, as well as increasing student mobility,” Liu said.

Third, Liu seeks to broaden existing partnerships through multilateral collaborations. This past year, for example, students from our partner institution in China studied abroad with Stony Brook students at Centre ValBio in Madagascar.

The International Academic Programs (IAP) Office is engaging faculty to develop new and innovative faculty-led programs relevant and accessible to all majors, including graduate-level studies. A proposal for a new Global Studies undergraduate major is currently under review in the SUNY System office, according to Liu.

Enhancing and strengthening English as a Second Language (ESL) programs is another top University priority. As an applied linguist and past president of TESOL (Teaching English to Speakers of Other Languages) International Association, Liu has unique insight into the special concerns of international students from non-English-speaking countries who enroll in American universities.

“Some students receive intensive ESL instruction in order to be matriculated,” he said. “Others need English to survive and thrive in their undergraduate academic courses, or extra help in order to teach content courses as teaching assistants. And still others need extra skills to write papers, proposals or dissertations at the graduate level.”

Best practices in ESL will address each of these levels of English language development.

A Climate of Diversity

Looking ahead, Liu said he appreciates the tremendous efforts that faculty have made in designing and proposing the Global Studies major that will bring global learning to the forefront of undergraduate education.

“Implementing such a robust curriculum requires the joint efforts of administrators, faculty and staff across campus,” Liu said. “But I am confident that Stony Brook University can accomplish this goal, because we believe in our mission to educate and empower our students to be the next generation of leaders, researchers and educators in the international community.”