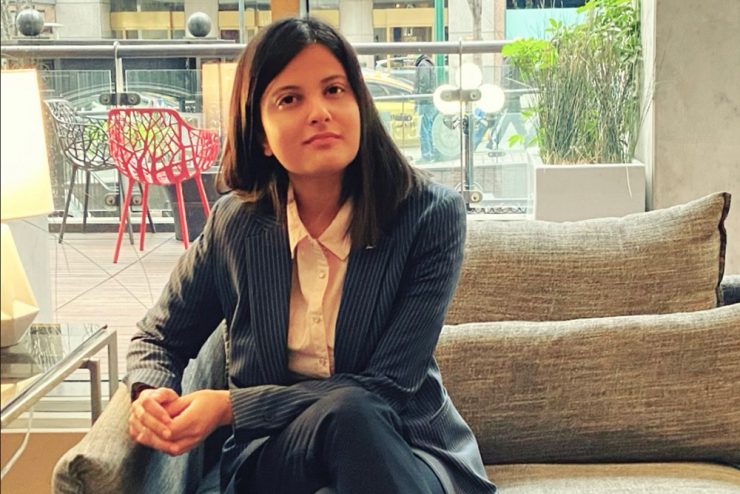 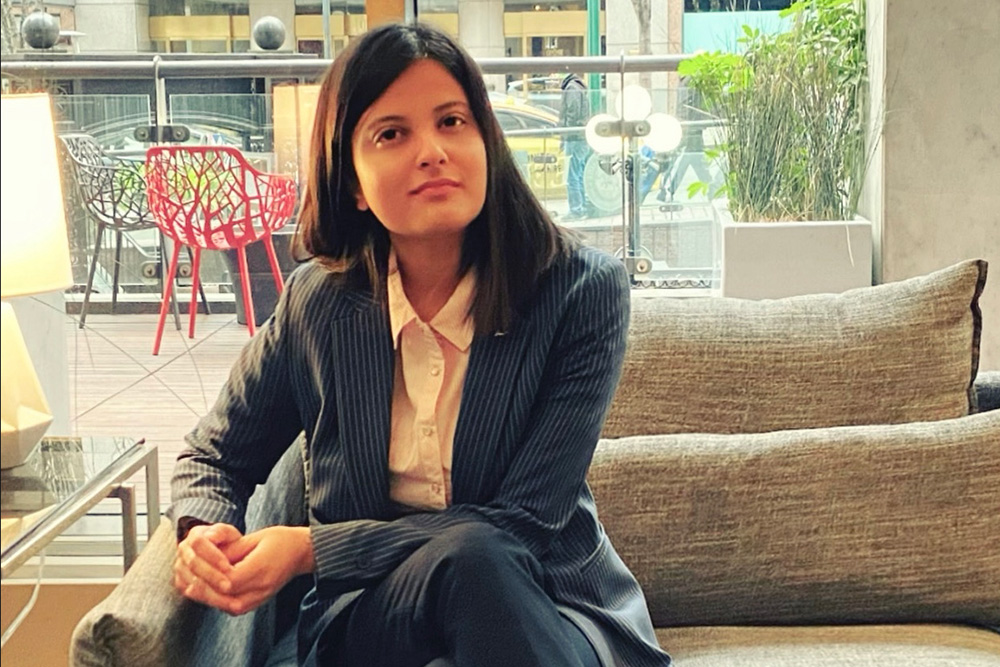 Doodling during class is something virtually every college student has done. For the vast majority, it’s a mindless activity to pass a few pre-occupied moments. For PhD candidate Kay Sohini Kumar, it opened a door that would lead to a prestigious fellowship.

In April, Kay was named a recipient of a Mellon/ACLS Dissertation Completion Fellowship, an award given to support emerging scholars during their last year of dissertation research and writing. Seventy fellowships were awarded from more than 1,000 applicants.

“As an international student and somebody working in a very non-traditional format, I had limited options, so the Mellon/ACLS was the only dissertation fellowship I applied for,” she said. “To be selected feels a bit unreal. I’m thrilled and also relieved. I was getting worried about what my fifth year would look like. Without this fellowship, I would have had to juggle teaching, writing my dissertation and job-hunting all at once. I’m really excited about getting to devote some uninterrupted time to my graphic dissertation.”

Kay, who grew up in Calcutta, India, has been interested in drawing from a very young age, and was about three years old when her parents got her a private tutor.

“I wanted to learn how to draw and how to make my own art, but my tutor preferred to teach his pupils how to emulate other artists,” she said. “That made me good at copying shapes, but not much else.” Kay quit drawing around the time she was in middle school, but years later found herself doodling in college. She began to take drawing seriously again in the first year of her PhD program at Stony Brook.

She said before finding graphic medicine — a rapidly growing field that intersects the medium of comics and the discourse of healthcare — her interest in comics started with reading canonical works such as Spiegelman’s Maus, Bechdel’s Fun Home, and Satrapi’s Persepolis, among others.

“When I started looking at scholarship about comics, I was influenced by the way [comics scholar] Hillary Chute wrote about the medium, and gravitated towards comics studies by the end of my first year at Stony Brook,” she said. Chute, a distinguished professor at Northeastern University, is now part of Kay’s dissertation committee.

Kay said the idea for her future work came while completing her master’s degree in Calcutta, when she came across comics scholar Nick Sousanis’s Unflattening — the first prominent graphic dissertation, published in 2015. 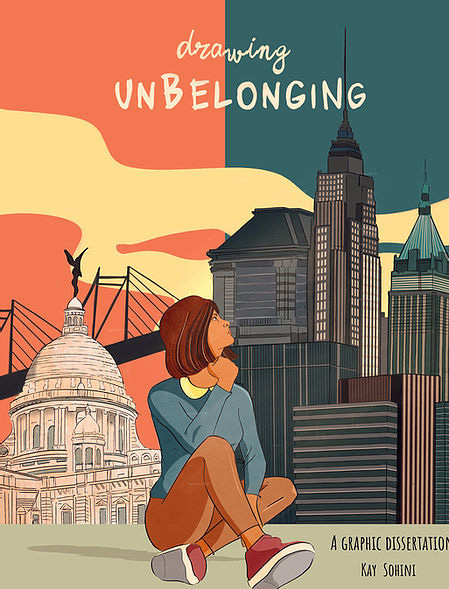 “The concept of ‘comics as method’ was really exciting to me, so I spoke to a former academic mentor about the possibility of trying graphic scholarship myself,” she said. Her idea was not well-received at the time, but that would change when she got to Stony Brook.

After completing her Master’s degree in 2016, Kay reached out to Jeffrey Santa Ana, professor in the Department of English at Stony Brook, about his work on Asian-American literature and ecocriticism and asked whether her research interests were a good fit. After receiving positive feedback, she applied for and was accepted into a PhD program at Stony Brook in 2017.

“When I started working with Professor Santa Ana and Lisa Diedrich (professor and chair, Women’s, Gender, and Sexuality Studies), who are now my dissertation co-directors, I broached the subject again, and they were very receptive,” she said, adding the comic medium was important to her for two reasons.

“First, it was a question of accessibility,” she said “I have written about this at length before on [the Eisner-winning online journal] Women Write About Comics, but I wanted my work to be readable to those outside the confines of academia. Secondly, I was invested in scholarship about comics that highlighted the medium.”

Although there is cutting-edge work being done in comics studies right now, Kay explained that she has come across scholarship in comics that she feels is obscure and too far removed from the medium. “I figured the best chance I had was that if instead of writing about comics, I drew a comic about comics,” she said.

Kay cites her dissertation co-directors Santa Ana and Diedrich as being pivotal in helping her achieve her academic goals.

“Their generosity, constant support, thoughtful feedback on my work, and their openness to the weird things I like to try, are the primary reasons that I have thoroughly enjoyed being in this program and have gotten so much out of it,” she said. “They let me go ahead with my ambitious but half-baked plans at a time when I had given them very little to go by, and their encouragement helped me deliver. I couldn’t have asked for better mentors.”

“As Kay’s interdisciplinary work demonstrates, she is in dialogue with some of the most recent and important criticism in studies of comics and graphic narrative, but she adds to this area of research her own unique artistic perspective,” said Santa Ana. “Her project is quite original and innovative, contributing a branch of knowledge to studies in comics and graphic narrative in the contexts of disability studies, medical humanities, ethnography, and global ecologies that have not yet been formulated or explored in any scholarship or published manuscript that I know of.”

Diedrich also cited the unique nature of Kay’s work and its potential impact.

“That we can count on a single hand the number of graphic dissertations suggests the originality of Kay’s project,” said Diedrich. “And even with the trail blazed by artists like Nick Sousanis, Kay is charting wholly new territory. I believe hers will be the first graphic dissertation outside of the field of education, and she has already attracted the attention of people in the comics field. Kay’s work is something special and will have an immediate and powerful impact both within and beyond the academy.”

Outside the English department, Kay said that Jennifer Green, director for Fellowships Advising & Professional Development in The Graduate School at Stony Brook, has been an especially helpful resource in helping her attain the fellowship.

“When I asked her about the viability of my project, she gave me so much in the way of practical feedback to streamline my proposal while also hyping my work up,” she said.

Looking ahead, Kay said she is deeply invested in how humanistic inquiry, or more specifically, how art-based research and pedagogy, can facilitate a more equitable future for all.

“I’d love to work in a research-centric position or in academic/comics publishing,” she said. “I also really enjoy writing about comics, so a job as a comics critic would be ideal, but it’s not a very realistic goal as those jobs are few and far in between. My short-term plan is to apply for select postdoctoral fellowships in the Fall so that I can continue working on comics as method, and a medium to address social inequities.”

As she prepares for the next year, Kay is grateful for a Stony Brook experience she describes as great.

“I figured early on that I wanted to do a creative dissertation, and that my research interests did not really fit neatly into disciplinary boundaries,” she said. “I expected some amount of resistance, but I was happy to find that was not the case at all. Everyone in the English Department has been overwhelmingly supportive. I have felt very validated here.”

The fastest-growing population on Long Island and around the world is older adults. By 2035, those aged 65 and over are expected to comprise more than 20 percent of Long Island’s population — a demographic shift that...

Coming Back Safe and StrongNews HighlightsUniversity

A new website that rates college campus dashboards gave SBU an ‘A’ for Achievement, so continue to consult the SBU COVID-19 dashboard for the latest information.