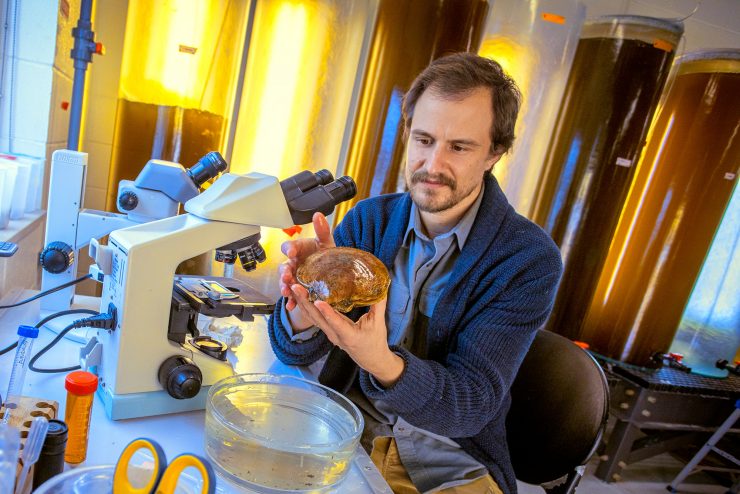 Shellfish couldn’t have a better friend than Stephen Tomasetti, a doctoral student in marine science at Stony Brook University’s School of Marine and Atmospheric Sciences (SoMAS).

Tomasetti has been studying the effects of low oxygen and low PH on scallops, oysters and blue crabs for the past four years.

With the help of more than $126,000 in grants and fellowships — all hard-earned, with a 4.0 GPA and a ton of online digging — Tomasetti has conducted research on the Peconic Estuary on Long Island, the coastal shelf waters of the New York Bight, and East Harbor/Salt Pond in Cape Cod, Massachusetts. He’s also analyzed national policy regarding multiple states’ implementation of the Clean Water Act.

With the blessing of his wife, Tomasetti left a successful five-year teaching career in Brooklyn, New York, where he developed a passion for communicating science, to return to graduate school and pursue his PhD at Stony Brook.

Tomasetti appeared this past December on National Public Radio, talking about his work with scallops, the local declines of the Peconic Bay scallop, what may be driving those declines, “and the exciting work I’ve been a part of in collaboration with Nils Volkenborn from Stony Brook University and Steve Tettelbach from Cornell Cooperative Extension,” he said.

Of all the marine creatures to study, Tomasetti said, shellfish are the most fascinating because many species, such as blue crabs, have complex life histories. The female crabs migrate by selective tidal transport, riding the tides out to the mouth of the estuary, where they release millions of larvae, which swim to the surface and ride surface currents far out onto the shelf.

“These tiny specks go through these incredibly long and dangerous journeys way out there on the shelf before surfing their way back in and molting into juveniles in our estuaries,” he said. “They’ve evolved these awesome behavioral and morphological adaptations to facilitate this journey.”

In one research project, Tomasetti set out to determine the effects of coastal hypoxia (low dissolved oxygen)/acidification/(low pH) on survival and development of Atlantic blue crab larvae immediately after their release as they make their way to the shelf.  The results of his research were published in his first academic paper.

One project in particular— the first for which he wrote a grant, acquired the funding, conducted the study and compiled the report — involved assessing vulnerability of the Atlantic bay scallop to low-oxygen and high-temperature stress both in New York and Massachusetts.

Another rewarding project was determining the extent of summer acidification and hypoxia in the Atlantic sea scallop habitat of the New York Bight, a roughly triangular indentation along the Atlantic coast of the United States, extending northeasterly from Cape May inlet in New Jersey to Montauk Point on the eastern tip of Long Island.

By going out on research cruises and deploying sensors to measure and map the water characteristics of the region, Tomasetti learned a different skill set, especially because the work took place across the shelf rather than in an estuary.

Tomasetti was a fellow with Stony Brook STRIDE (Science Training and Research to Inform Decisions), an innovative training program that provides STEM graduate students with unique interdisciplinary skills to assist, create and eventually lead the translation of complex data-enabled research into informed decisions and sound policies.

“I think the very challenging problems we face — ocean/coastal warming, acidification and deoxygenation — require major, innovative policy responses, and if I can help to contribute to the discourse that underlies those responses in any way, I would consider it an honor,” he said.

Tomasetti has also been a member of the team involved in the Shinnecock Bay Restoration Program, which established Suffolk County’s first permitted and restored oyster reef. 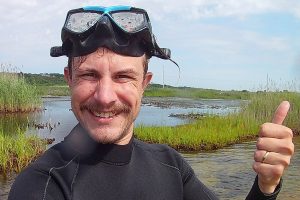 “Oyster reefs in New York predate colonization by the Europeans, but eventually were extensively overfished” he said. “I am interested in how the restored oyster reef system influences environmental conditions, specifically the dissolved oxygen and CO2 levels of the water.”

Tomasetti called oyster reefs “biological hot spots” with unique composition. “The three-dimensional structures of the reefs are formed of shell and over time by oysters growing on top of each other,” he said. “All of these animals and shell material in one place make it different from the habitat of the surrounding waters.”

He said he is interested in seeing what additional benefits and challenges arise from this study, specifically as they relate to general water quality. Using a variety of monitoring equipment to learn about the dynamics and fluctuations, Tomasetti is running field experiments that examine processes such as oyster growth and calcification on and off the reefs.

“I took those classes seriously, trying to learn as much as I could from these fantastic teachers, and I learned a lot,” he said. “Many of these professors who have had a big impact on me have also have become mentors.”

Tomasetti, who began teaching this semester as an adjunct at Adelphi University, said he enjoys planning courses and facilitating student learning at the undergraduate and graduate levels. But when it comes to research, he wants to work with diverse interdisciplinary teams to help address some of the larger challenges related to coastal and climate change, and to contribute more to policy and conservation.

Tomasetti has also taken on a new exercise: reading one scientific paper per day. He reads material relevant to his ongoing research, but also seeks out papers in fields more adjacent to what he works on, such as paleoclimatology, social environmental science, and science communication.

“I’ve found that this practice has generated new and interesting ideas, helped me become a better writer, taught me interesting statistical methods, and just generally helps me stay engaged and fascinated with science, which is really important when you’re in the weeds of your own research,” he said. 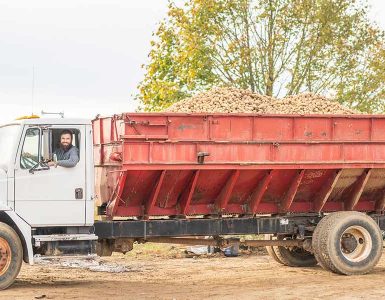 Seawolves can support local farmers, eat healthier and feel confident in knowing where their food comes from with the Zilnicki Farm Fresh 2021 CSA.