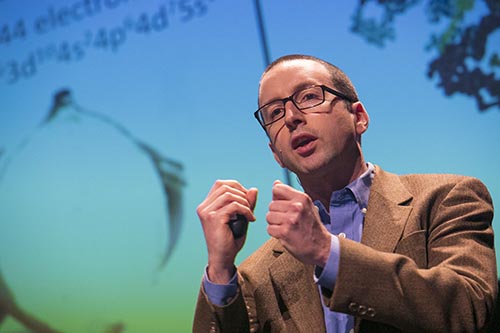 How do electrons move within molecules?

Thomas Allison, an assistant professor in the Departments of Chemistry and Physics at Stony Brook University, posed this fundamental question on the way to winning the 2017 Discovery Prize.

In a presentation delivered April 13 at the Charles B. Wang Center Theatre, Allison convinced a panel of three distinguished judges that his project deserved a $200,000 cash prize to help fund his research. The award will finance equipment that will help scientists see how molecules move and behave in real time.

The winner was chosen by a distinguished panel of judges, including 2016 Nobel Laureate in Physics from Princeton, F. Duncan Haldane, Berkeley’s Director of the Nuclear Science Division, Professor Barbara Jacak, and Chairman of the Simons Foundation and a member of the National Academy of Sciences, James H. Simons.

“I think our research is important because we are making new tools that enable chemists and physicists to see how electrons move in molecules. And that fundamental dynamic is important in so many reactions and devices that affect our daily lives,” said Allison.

The Discovery Prize was established in 2013 with a generous donation from the Stony Brook Foundation Board of Trustees with this goal in mind. The Prize is awarded to an early-career Stony Brook faculty member in the STEM disciplines.

President Samuel L. Stanley Jr. opened the ceremony, emphasizing the critical role that the Discovery Prize Competition plays in an era of diminished federal funding for projects that will lead to ongoing technological breakthroughs.  He cited the development of the technology for the MRI as one example.

Laurie Krug, the inaugural Discovery Prize winner in 2014 and an associate professor in the Department of Molecular Genetics and Microbiology, said it is a scientist’s challenge to avoid “technobabble.”

“I am pleased to share with you that the Discovery Prize has provided a tremendous boost to my lab research,” she added. “We have accomplished several goals of our initial proposal: We have a recent publication, and we have secured additional National Institutes of Health funding to support our gene-editing project.” Krug’s cutting-edge research is aimed at advancing the understanding of herpes virus pathogenesis.

SBU Visiting Professor Alan Alda, whose Alan Alda Center for Communicating Science champions scientific plain speaking, spoke about the difficulty of winning funding for research if “it doesn’t seem to lead to a better toaster.” He reminded the crowd that Einstein’s Theory of Relativity is only a little more than a century old, and joked that the finalists’ obligation was to make sure that he would be able to understand everything they said. Duncan Haldane, a 2016 Nobel Prize winner in Physics, served as one of the three judges. Haldane said he found all four presentations compelling and worthy of funding, but added that the concrete nature of Allison’s project won him over.

“If he can succeed in getting the molecular orbitals to move in real time and to change with light, as opposed to seeing them represented abstractly by numbers, a spectrum or a graph, it will make a real difference,” Haldane said.

Another judge, Barbara Jacak, a professor of physics at the University of California, Berkeley, and member of the National Academy of Sciences, said the project intrigued her because it would explain whether molecules “hop around or move slowly and smoothly.” She said that she and her colleagues tend towards the latter hypothesis, but this could offer definitive proof.

James H. Simons, founder of Renaissance Technologies and chairman of the Simons Foundation, was the third judge.

Now, perhaps, all that has changed.

In the aftermath of the announcement that he had won, Allison’s excitement was palpable.

“I can’t wait to do this experiment,” he said. “Every time you make a new tool that lets you see further or deeper or smaller or faster it can lead to new breakthroughs in science and technology. The Discovery Prize funding will allow us to develop that new tool.”