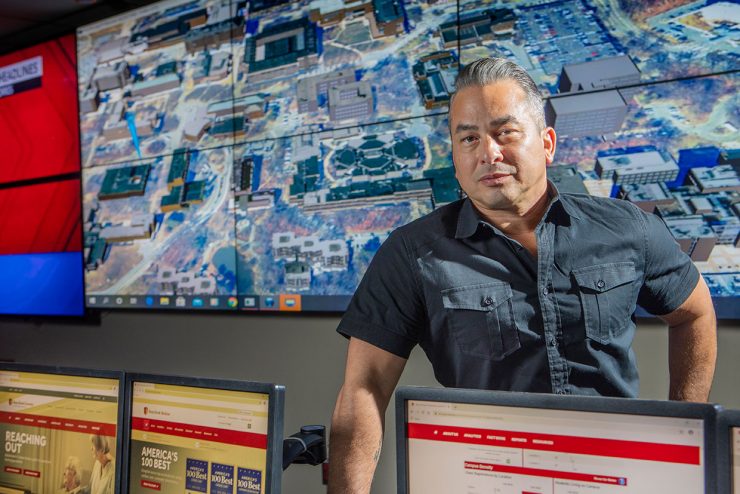 When Nelson de Jesus Castilla Jr. became a deputy police chief at Stony Brook University on October 1, he not only became the first Latino chief to serve on campus, but he also honored his grandfather Ismael Quintero’s legacy.

His grandfather, now 95, had served as a captain in the military in Colombia, and became a captain in Policia Metropolitana de Barranquilla, before emigrating with his family to the United States in 1966.

Law enforcement, however, proved to be Castilla’s destiny. After graduating from the Westchester County Police Academy in 2001, he was assigned to the State University Police Department in Purchase. He moved to the city of Mount Vernon three years later, and arrived at Stony Brook in 2005, working as a midnight patrol officer until being promoted to inspector of investigations in 2016.

Today, Castilla and three other chiefs oversee a police force of 60, which includes nine dispatchers and five detectives.

Lawrence Zacarese, Interim Chief of Police and Assistant Vice President for Campus Safety, said, “I have had the privilege of promoting Nelson three times since I have been at Stony Brook. His dedication to the department is only superseded by his devotion to his peers and fellow officers. His experience, poise, and leadership capability are just a few of the qualities that attract others to follow his lead while allowing me to continually and comfortably place my confidence in him.”

Of his many awards and citations, Castilla is particularly proud of the plaque in his office that reads, “Lifesaving Award 2016.”

He received the citation for saving the life of a teen who broke out of the psychiatric unit at Stony Brook University Hospital and scaled a 30-foot scaffold. Sensing the youth’s serious intent, the then-lieutenant Castilla declared his fear of heights, but nevertheless handed his gun belt to a fellow officer and made the climb.

His caring demeanor convinced the 17-year-old that life was worth living. The boy voluntarily came down, hugged Castilla, and said he was sorry to have put him through the ordeal.

“One of the onlookers was his dad, and I couldn’t imagine seeing my own son in danger,” said Castilla. “I thought, ‘I only hope that someone would intercede on my family’s behalf if I needed it.’”

Castilla credits his success to the examples set by his own family, including his parents, who he calls “warriors.” “They are the reasons why I am who I am today,” he said.

Castilla’s mother worked through all nine months of her pregnancies, and his father always worked two jobs, working as a handyman at a Catholic school in the Bronx and a gas attendant on weekends. He later worked as an HVAC technician at the Intercontinental Hotel and the St. Regis, pulling a 4 pm to midnight shift before going on garbage detail from midnight to 8 am.

“He didn’t know how to change a light bulb when he came to this country,” Castilla said, adding that he was proud of the technical skills his father acquired, as well as the fact he learned English by watching Sesame Street.

Tattoos on Castilla’s arms feature the wisdom of his parents in their own handwriting: his father’s reminder, “Dios Proveerá,” (which means God provides) and his mother’s platitude, “Time is gold and everything comes with time.”

Castilla is often puzzled by how some people judge others unfairly based on ethnicity.

“It would be amazing to evaluate people on their ability rather than what they worship or who they love. It bothers me that people eliminate or exclude whole groups of people because they look a certain way,” Castilla said. 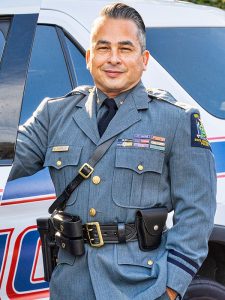 He further prides himself on working his way through the ranks based on merit. “I believe that promotions have to be earned, not given. I’ve never benefited from being Latino,” Castilla said.

Castilla is a firm believer that experience is the best teacher. After serving in the relatively quiet town of Purchase, he left that 15-officer force for Mount Vernon — “a little city with big city problems,” he said.

It reminded Castilla of the rough-and-tumble neighborhoods of his youth in Corona, Queens, and Greenpoint, Brooklyn. He described his first day of duty as baptism by fire when two shootings took place within two hours on a Sunday morning.

Castilla was first to respond to a shooting at a school playground. “As I arrived I could still hear shots,” he recalled, noting a young boy was hit when someone tried to shoot another man on a basketball court. Castilla rendered aid until an Emergency Service Unit arrived. “A couple of hours later, I responded to another shooting not far from there. All that in the first half of my shift.”

Castilla, who holds a bachelor of science degree in Community and Human Services, is pursuing a master’s in Adult Learning at Empire State College. The curriculum required that he devise a 40-page curriculum on cultural awareness, which he hopes to implement for training purposes if it gets approved.

Stony Brook University has become a model for other agencies when it comes to bridging cultural gaps, said Castilla, who added that he and the other members of the police force receive constant training that includes what he calls “upping your cultural IQ.”

Castilla loves to mentor and teach, and said he aspires to becoming a university professor when his days in uniform come to a close.

With characteristic modesty, Castilla said, “I suppose my ability to mentor and educate the cops in this department is my niche, and I add a little flair while doing it. I take great pride in the fact that I am able to touch their minds and spirits. To have someone say, ‘You influenced me in a good way’ is huge, and second only to raising children.”