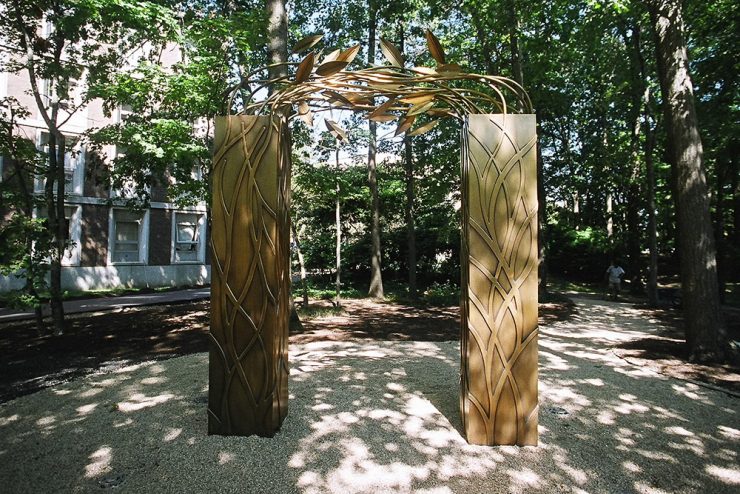 At 8 am Friday morning, September 10, Stony Brook President Maurie McInnis joined other campus representatives and community members in a ceremony honoring the 21 alumni who died in the terrorist attacks on September 11, 2001.

To mark the 20th anniversary of the attacks, the university has created a more accessible and expanded Memorial Arch, located outside the Humanities building, with new landscaping, lighting and paving that will help affirm the Arch as a space for quiet reflection. The Arch, which has names of the alumni engraved upon it, was created — along with a grove of trees planted in the bus loop — as a way to remember them, celebrate their lives and carry forward their legacy.

Lawrence Zacarese, vice president of Enterprise Risk Management and chief security officer at Stony Brook, offered the opening remarks, poignantly relating his own experience of losing friends and coworkers as a NYPD officer at the time of the attacks.

Sister Sanaa Nadim, chaplain at the Interfaith Center at Stony Brook and co-chairperson of the Islamic Society of North America, then delivered the benediction. After a brief prayer, McInnis delivered her keynote remarks.

McInnis also reflected on the impact of the attacks on New York and the importance of the Memorial Arch for the Stony Brook community.

“Although it has been 20 years since that tragic day, the images, emotions and responses have endured,” she continued. “It’s my hope that this new memorial will remain an accessible and visible place for contemplation for generations to come. Because at Stony Brook University, we are all New Yorkers. We will honor the lives of those we lost on 9/11, say their names and hold them in our hearts. We will remember what it means to live in this incredible state and how we can continue to serve it.”

Ahmed Belazi, president of the Alumni Association and director of strategic analytics and technologies for Student Affairs, then read the names of the fallen alumni. Provost Paul Goldbart read a list of loved ones related to the Stony Brook community.

Following the ceremony, the campus chimes rang 21 times beginning at 8:46 am, the time the first plane hit the World Trade Center on September 11.

Stanley Bak will study the "Science of Fuzz Testing Autonomous Cyber-Physical Systems," which will apply to the testing of complex autonomous cyber-physical systems such as unmanned drones. 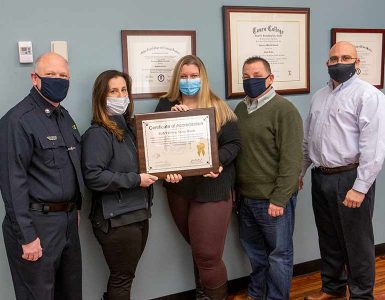 It is one thing to be in compliance with the standards expected of all police units, but quite another to be “ahead of the curve” and serve as a model for other agencies. “That is exactly what Stony Brook University’s...