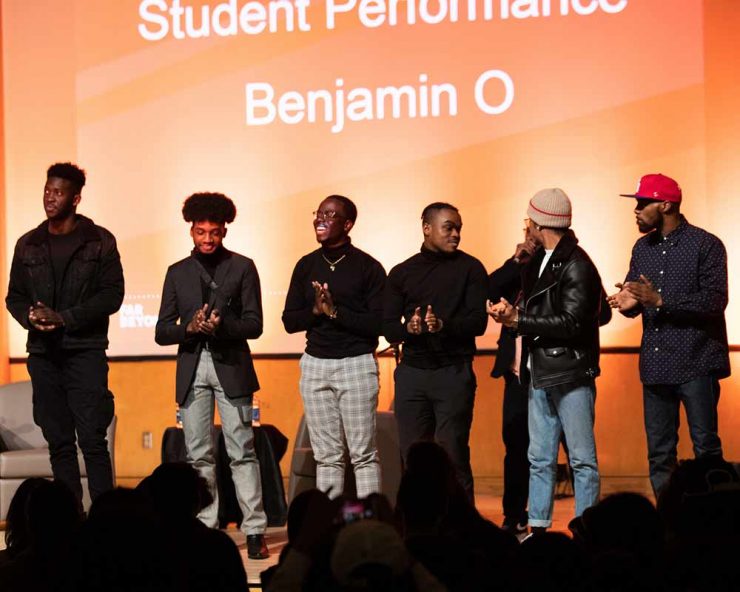 The audience won’t be there in person, but it will certainly be there in spirit when the annual Black History Month Spoken Word/Open Mic contest takes place virtually on Feb. 22.

“It shows that as spoken word artists, we’re not just limited to the stage,” said Benjamin Owusu ’22, who performed at the BHM opening ceremony on Feb. 3 and delivered a memorable performance at the 2020 spoken word contest with a performance that centered on the Central Park Five.

The annual event is a highlight of Stony Brook’s Black History Month programming, and is an opportunity for students to showcase their gifts and intellect through spoken word and other diverse modes of expression.

Owusu admitted that when he performs next week, he will miss “that little nervous feeling you get before you get on stage, and as soon as your foot touches a stage it vanishes,” but added that performing virtually also offers challenges and opportunities in terms of how the work is presented.

“I have to utilize the Zoom background to my advantage,” Owusu said. “I’m also utilizing the audio, so it’s just recognizing, how do I utilize certain functions to benefit my performance.”

“One great thing is the students can now be anywhere in the world to perform, they do not need to be located physically on campus,” said Isobel Breheny-Schafer, assistant director of Student Media and a member of the Black History Month committee. “Now, all the world really is a stage!”

Breheny-Schafer said that the virtual performance will “lose some of the social aspect and networking which happens at the live event.” Owusu, however, noted that when he performed at the BHM opening ceremony — which was also virtual — he was able to see comments people were making in real time.

“That also gave me another level of confidence,” he said. “Wow, okay, what I’m saying is actually impacting people.”

The event will begin at 8 p.m. and will feature performances from current students in good academic standing. First, second, and third prizes will be awarded and the winners will be invited to perform on WUSB 90.1 FM/107.3 FM.

The pieces will follow the 2021 BHM theme of “Black Creativity.” For Owusu, a social work major, that means using his experiences to “shed light on certain topics that aren’t talked about.”

Led by Heidi Preis, the study serves as an indicator that a focus on vulnerable pregnant women may help to promote infant vaccination.