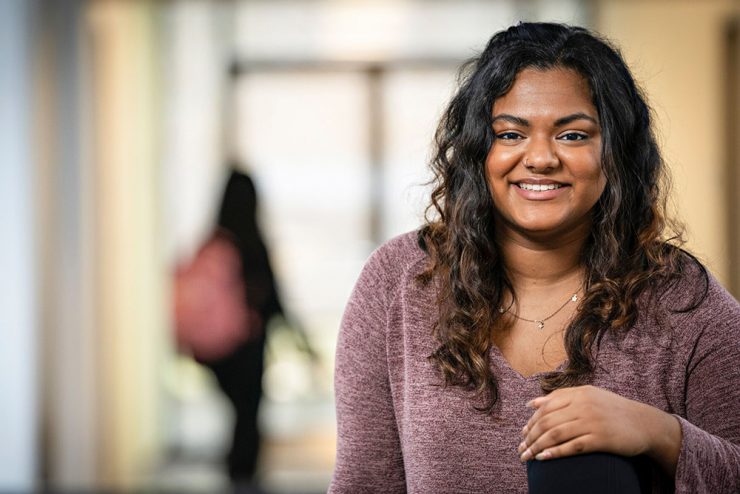 Being the proverbial square peg in the round hole is nothing new to Pavithra Venkataraman ’22. In fact, that is how she has felt both in her hometown of Columbus, Indiana, and in Chennai, India, where she lived from ages 8-11.

That feeling of not knowing where her allegiance lay is largely responsible for Venkataraman’s endless search for the perfect fit, to her eventual awareness that others were feeling that same way. Ultimately, that experience energized her into the multi-layered person she is today, poised to become the change she craves.

“I had always sort of felt like I never completely fit in at either location,” recalled Venkataraman. “Living in Columbus, the majority of my peers and classmates were white and had only ever experienced that one location. However, when I lived in India, I never fit in completely with my classmates who had always lived in India either, especially since my first language was English and theirs was not. That binary component has always influenced my exploration of finding a community where I felt like I fit in, no matter where everyone was from or how they grew up.”

Venkataraman, now a University Scholar, enrolled at Stony Brook as an applied mathematics and statistics major, but soon realized it was not the right fit. A women’s studies class led her to take more classes in that field, and she is now pursuing a bachelor’s degree in Women’s and Gender Studies.

“This major has been so enjoyable to me because of how broad it is. The point of the major is to learn about all the various ways in which different identities and social systems interact to create injustices and inequities in our world and I appreciate how much that teaches me,” she said. “Although a lot of the subject matter is tough and disheartening, I cannot imagine not exposing myself to these topics because they affect so many people in so many ways and the more that I know, the more I can help instead of contribute harm.”

Venkataraman double minored in philosophy (where courses in symbolic logic have taught her to think more critically, and philosophy of race and existentialism touched upon race, ethics and existence) and political science. “Logical and critical thinking skills are also very important for a legal field,” she said. “I added a political science minor because I wanted to take more classes related specifically to law.”

Venkatamaran appreciated the support that she received from her resident assistants as a freshman and returned the favor by becoming an RA at Benedict Hall in July 2020, collaborating with staff to create events and initiatives like the Haunted House walk-through, which was both COVID-safe and fun. 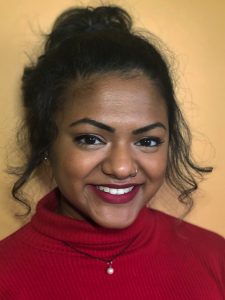 Venkataraman — who is also editor of The Torch, the semesterly University Scholars Program newsletter — was recently accepted as a social media intern for the Response Crisis Center of Suffolk County, which provides a mental health hotline as well as community outreach. She was drawn to it “because of how prevalent this issue is within our peer group and how difficult it can be for people to get help.”

As a release from her intense stewardship, Venkataraman enjoys singing, inspired by her father, who has a background in classical Indian (Carnatic) music and has performed in several concerts in India. Venkataraman took Carnatic vocal lessons when living in India, and later expanded her musical horizons with voice lessons in Western music, singing in choirs and bands in middle and high school.

She was accepted into the Stony Brook Vocalists, an a cappella music club, as a sophomore. “I love being part of a group that can create such beautiful music and harmonies with just our voices,” said Venkataraman, who is now the club president.

“In a normal year, we perform around campus wherever requested for clubs and campus departments, around three or four times a week, we rehearse twice a week, and we put on two concerts open to the campus community,” she said. “In a virtual setting, we have not been able to do all of the normal in-person performances but have really worked to improve our online presence by putting out full group videos around three times a semester, as well as smaller individual social media clips.”

Venkataraman plans on attending law school after her time at Stony Brook, noting that she likes “taking an issue and putting together a team to figure out the most efficient solution to that problem and implementing it together, which I think lends itself in law to being an advocate for people who might not be able to advocate for themselves.”

“In terms of a career, I have always known that I wanted to apply my specific skillset to helping those who do not have the same privileges that I was blessed with,” Venkataraman added. “The fact that we do not live in a just society is obvious, and I cannot imagine myself not doing everything that I can to help those who are not able to help themselves.”

Suffice it to say that Venkataraman and Stony Brook have found the perfect fit.

College of Arts and Sciences Women's and Gender Studies

Stony Brook alum Flannery Cunningham ’18 and PhD student Niloufar Nourbakhsh are highlighted in a Washington Post article, “21 for ’21: Composers and performers who sound like tomorrow.” Both studied with...