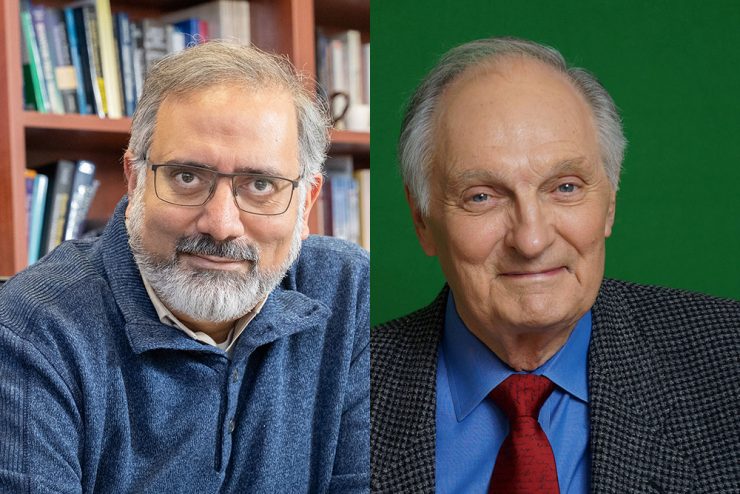 Abhay Deshpande and Alan Alda have been named 2021 Fellows of the American Association for the Advancement of Science (AAAS).

The AAAS bestows this honor annually to members whose “efforts on behalf of the advancement of science, or its applications, are scientifically or socially distinguished.” Fellows will be honored virtually at the AAAS annual meeting on February 19, 2022.

Deshpande is a distinguished professor in the Department of Physics and Astronomy at Stony Brook University and a nuclear physics expert who also holds a joint appointment at the U.S. Department of Energy’s Brookhaven National Laboratory as director of Electron-Collider Ion Science. A professor at Stony Brook since 2004, he was named a Fellow by the AAAS, “for key contributions to the determination of the spin composition of the nucleon, and for leadership in the development of the science program of the Electron Ion Collider.”

“I am happy and honored to be elected an AAAS Fellow,” said Deshpande. “I have been most fortunate to have some of the best students, postdocs and colleagues at Stony Brook and Brookhaven Lab, as well as many collaborators around the world, without whom this honor would not be possible.”

Throughout his career, Deshpande has served both the U.S. and international scientific communities. In earlier work as a key member of the ZEUS Collaboration at the Deutsches Elektronen-Synchrotron (DESY) in Germany and the Spin Muon Collaboration at CERN, the European particle physics laboratory, he made crucially important contributions to measurements of nucleon structure functions and to determining quarks’ contribution to nucleon spin. In addition to conducting research as part of these large international collaborations, Deshpande has made significant contributions to the accelerator and detector hardware that makes such research possible.

Deshpande became a SUNY distinguished professor in 2021 — the highest rank offered selectively among SUNY faculty. He became a RIKEN Fellow in 2004 and has served as a full professor at Brookhaven Lab since 2013. Deshpande currently leads the Center for Frontiers in Nuclear Science (CFNS), a joint initiative launched by Stony Brook University and Brookhaven Lab in 2017 with financial support from the Simons Foundation.

Alda is a visiting professor at the Alda Center for Communicating Science, which was established in 2009 at the Stony Brook University School of Journalism, now the School of Communication and Journalism.

An actor, director, author and activist, Alda is a seven-time Emmy Award-winner and Academy Award nominee whose many films and television programs include M*A*S*H* and The West Wing. He became interested in communication when a life-long interest in science led him to host Scientific American Frontiers on PBS. After 11 years on the show, Alan wondered why scientists struggled to switch from lecturing about their work to having real conversations about it. He thought exposing them to improvisation might help.

The idea worked; applied improvisational exercises, combined with communication strategies and social science, had a notable effect on scientists, and their communication skills improved from training provided by the Center. In the last decade-plus, the Center’s faculty have traveled across the U.S. and the world, including Australia, Canada, Germany, Israel and Scotland. Expert communication trainers and educators have worked with researchers from Cornell University, the Environmental Protection Agency, Harvard University, the National Institutes of Health, the Nature Conservancy, Rita Allen Foundation and the U.S. Department of Defense, among hundreds of others.

“We’re delighted that AAAS has recognized Alan as one of their Fellows,” said Laura Lindenfeld, dean of the School of Communication and Journalism and executive director of the Alan Alda Center for Communicating Science. “In addition to helping to found the Alda Center, Alan has been a strong advocate for science, and science communication. He has helped all of us who value science communication to raise awareness of the importance of effective communication, and to support researchers from all fields as they learn to share the wonder and joy of their work, and its significance, with the world.”

As a way to help recent graduates and displaced workers navigate a difficult job market, the Career Center is offering a two-day virtual workshop series. 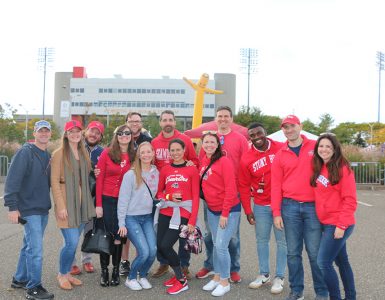 Homecoming festivities returned in full force this year as alumni and friends were welcomed back to campus for a full day of fun.