A Renaissance for Stony Brook’s School of Medicine 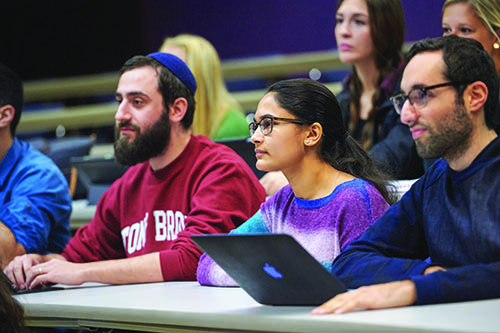 In 1982, Jim Simons, the former Chair of the Department of Mathematics at Stony Brook, made a $750 unrestricted gift to the University’s annual fund, becoming the first at Renaissance Technologies to contribute to the Long Island institution. In the years that have followed, 111 Renaissance Technologies families have donated over $500 million to date in support of Stony Brook’s students, faculty and primarily research in life sciences and medicine — including gifts made through the $600 million Campaign for Stony Brook. This significant investment has improved the quality of medical education at Stony Brook, creating 34 endowed faculty chairs and professorships, nine innovative academic and research centers, and $35 million for student scholarships and fellowships.

According to Dr. Stanley, philanthropy gives public research universities like Stony Brook the “margin of excellence.”

“By sharing their talents, their time and their philanthropic giving over the years, 111 current and former employees of Renaissance, almost all of whom did not graduate from Stony Brook University, have committed to Stony Brook’s success and have given generously of their time and treasure to advance the mission of New York’s premier public institution of higher education,” said Dr. Stanley. “It is fitting that we name the academic program that has a tremendous impact on so many in recognition of this generosity and vision as the ‘Renaissance School of Medicine.’”

“When Marilyn and I were at Stony Brook, we knew that one day Stony Brook could join the ranks of the most elite universities in the country,” said Jim Simons. “So when Sam Stanley arrived and he articulated his vision of how the University would achieve that distinction, we knew we wanted to help.”

“Stony Brook University is an important institution in the Long Island community and it’s certainly had a significant impact on Jim’s and my life,” said Marilyn Simons, PhD, alumna of the University and President of the Simons Foundation. “Support from Renaissance, particularly for the University’s work in the sciences, medical research and the delivery of health care services, has enhanced the University’s medical services to the LI community. We are delighted to see the generosity from Renaissance.”

“Renaissance Technologies’ generosity will contribute to our shared vision of strengthening one of New York’s foremost public research institutions,” said Stony Brook Foundation Chair, IMAX Corp. CEO, and Stony Brook alumnus Richard L. Gelfond. “As part of the Campaign for Stony Brook, their gifts will touch every part of campus, most notably the School of Medicine and the Hospital, but they also truly support the University’s holistic mission. Gestures like Renaissance’s also illustrate the importance of providing philanthropic opportunities in local communities to drive a sense of pride and improvement for the future.”

The Renaissance School of Medicine is the top-ranked public medical school in New York State and ranks 57th in the nation, according to U.S. News and World Report. A member of the Association of American Medical Colleges (AAMC) and a Liaison Committee on Medical Education (LCME)-accredited medical school, the Renaissance School of Medicine was established in 1971. With 25 academic departments, the School trains over 500 medical students and more than 750 medical residents and fellows annually.

“This incredible engagement among more than 100 families created a true ‘renaissance’ at Stony Brook Medicine,” said Kenneth Kaushansky, MD, Senior Vice President, Health Sciences, and Dean, School of Medicine. “Our researchers, educators and clinical faculty unanimously agreed; we could not be more proud that the School of Medicine was selected to reflect the excellence the families of Renaissance Technologies helped create at Stony Brook.”

Twenty-six years after the first Simons gift, the Simons Foundation made a transformational investment in Stony Brook in 2008, with a $60 million gift to create the Simons Center for Geometry and Physics.

Then in 2011, Jim and Marilyn Simons (BA ’74, PhD ’84), along with the Simons Foundation, pledged $150 million to the University, which at the time was one of the largest gifts ever to a public university. The donation included a matching gift challenge and became the cornerstone of the Campaign for Stony Brook, a philanthropic initiative to raise $600 million by June of 2018.

The Simons Challenge triggered a flurry of gifts, both modest and major, from Renaissance families. These gifts supported areas where the personal interests of the Renaissance families intersected with the strategic needs of the University, such as Stony Brook Children’s Hospital, basic science research, imaging, healthcare for those who are underserved, cancer research, medicine and the Staller Center for the Arts. This source of generosity from the families of Renaissance was the inspiration for the University’s plan to name the School of Medicine in recognition of this support for excellence.

“The Stony Brook Council was happy to move this naming opportunity forward in the process,” said Kevin Law, Chair of the Stony Brook Council and President of the Long Island Association. “Everything that Stony Brook University has done and continues to do inspires people in our community and beyond to support its amazing trajectory. Renaissance families truly stand out – they have invested in nearly every corner of the University. So this is a great day for the Stony Brook School of Medicine, to be able to recognize that generosity, which is truly benefitting our students and the entire Stony Brook campus community.”

“These investments in medicine and across campus by Renaissance families have transformed the University and the communities it serves by deploying the most inventive new solutions to the most important issues of our time,” said Dr. Kaushansky.

LATEST Stony Brook University Face Covering Requirements An Important Message from the COVID-19 Health and Safety Committee  EXISTING GUIDANCE  For the safety of our campus community, face masks are required while...