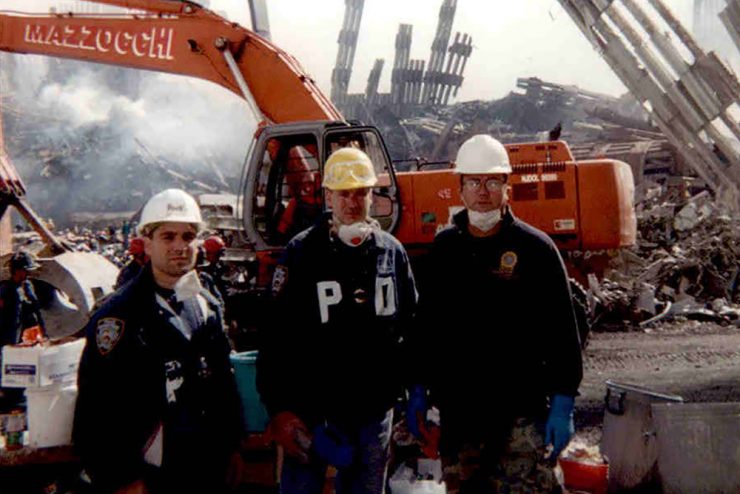 For first responders Bruno Valenti and Stephen Lengyel, the experience of being on the front lines of the terrorist attacks of September 11, 2001 was profoundly life-changing.

The two former members the New York City Police Department (NYPD) — who were recently featured on 60 Minutes Overtime — both ended up at the WTC Health and Wellness Program at Stony Brook Medicine, where they are part of an exceptional group of empathetic physicians, nurses and nurse practitioners providing quality medical care for the responder population.

“Our administrative staff works tirelessly behind the scenes ensuring our patients are cared for,” said Valenti, a clinic nurse practitioner and services administrator. “As [Wellness Program director] Dr. Benjamin Luft will often say, ‘doing the right thing’ is extremely important in our approach and care of this population.”

At the time of the attacks, Valenti was a detective assigned to the forensics division/ballistics section of the New York City Police Department (NYPD). His September 11 began with attending classes at St. John’s University in Queens prior to the start of the workday.

“After the first plane struck the North Tower, students gathered on the veranda of the university and noticed smoke rising,” said Valenti. “We thought the initial report of a plane crashing into the tower was exaggerated.”

He would discover that, tragically, was not the case. Valenti reported to his office at the NYPD Crime Lab and watched the heartbreaking events as they unfolded, as his unit was prohibited from going to the collapse zone. Four days later, Valenti and other detectives joined the search and recovery operation at Ground Zero, hoping to find survivors and victims. Unfortunately, none would be found.

“What many of us found particularly eerie was the discovery of an occasional timepiece which had stopped at a particular hour of an event that occurred that morning,” he said. “I have many sad memories of loved ones searching for any sign of their family.”

Lengyel, a nurse in the WTC Wellness Center, was an officer assigned to the Brooklyn North Task force in 2001. At around 9 a.m., he and five other officers were on their way to the 44th Precinct in the Bronx, in uniform for HAZMAT training.

“It was a clear sky and just a beautiful day,” remembered Lengyel. “As we were going over the Triboro Bridge, we noticed the North Tower was on fire. We listened to the radio and heard that a plane hit it, and as we contacted our base for instructions, we saw another explosion come out of South Tower with flames and smoke billowing out. I have many memories of co-workers and their families and friends who were in those buildings that day.”

With an initial glimmer of hope, Lengyel was among the many responders who showed up to help find survivors, conducting perimeter security with his unit. “These responders disregarded their own safety, families and gave their time to help others,” he said.

The experience profoundly affected Lengyel’s career. In January 2021, after being a registered nurse and working in an emergency department for 26 years, he went to the WTC Health and Wellness Center in Commack after retired friends and co-workers urged him to go.

“I was treated by experienced, qualified doctors, nurse practitioners, nurses, medical assistants, and the list goes on,” he said. “Everyone was very professional and dedicated to their role. Being a first responder, I knew how important this program was and I was so impressed that I inquired about a position there.”

He applied, and a few months later he was part of the team.

“I couldn’t be happier to be part of a group of people that focuses on helping those who gave up so much to help others. It’s been extremely rewarding,” said Lengyel, who encourages those that haven’t signed up for the program to do so. “I think after your first visit you will say to yourself, ‘I should have done this a long time ago.’ You owe this to yourself. Come in and let us take care of you.”

Valenti’s path also led to Stony Brook, but was a bit different. He had always kept two jobs — one with the police and one with EMS at St. Vincent’s Hospital and then Weill Cornell Medical Center — until he decided to enroll in school to become a nurse, which was desirable due to the flexible schedule and affordability; he couldn’t take two years to complete a physician assistant program. He became an emergency room aide at St. Catherine’s Hospital in Smithtown, and Catholic Health Services (CHS) covered the cost of school. “After graduating in 2010, I remained at St. Catherine’s in the emergency department and then retired from the police department one year later, after 20 years.”

Valenti earned an MS in the Adult-Gerontology Nurse Practitioner Program at Molloy College in Rockville Centre, became board-certified and began a new career working in primary care as a provider with CHS, and then in the emergency room at Memorial Sloan Kettering Hospital in Manhattan. In August 2019, he accepted a position with the WTC Health and Wellness Program.

Valenti said the 20-year milestone is a sad reminder of the lives that were lost and the continued illness of our responders.

“The beauty of humanity that resulted from the events from that day lives on in our society caring for and remembering all that served selflessly on that day,” he said. “Our clinic that began with Dr. Luft ‘doing the right thing’ is a strong testament to that. The WTC Health Program is an amazing organization, and I am extremely proud and fortunate to be a part of it.”