m2M#S is led by Esther Takeuchi, distinguished professor and William and Jane Knapp chair in the Department of Materials Science and Chemical Engineering, in Stony Brook’s College of Engineering and Applied Sciences. The award follows two previous rounds of funding dating back eight years; m2M was first funded in 2014, and then m2M/t in 2018. Takeuchi said the first four years of the research focused on understanding and controlling why batteries generate heat. The second four years focused on the science needed to make batteries scalable and explored how to simultaneously increase their power output and energy content.

“The next four years will focus on new battery systems that are lower cost, more earth-abundant and provide function that is not available from the batteries on the market today,” said Takeuchi. “Advanced battery systems are needed to continue to expand adoption of electric vehicles and for the wider implementation of intermittent renewable energy generation such as wind and solar.”

Kenneth Takeuchi, distinguished teaching professor in the Department of Chemistry, College of Arts and Sciences, is the strategic leader for the m2M#S center and developed the science theme that served as the basis for the winning proposal. The Takeuchis are married and have been active scientific collaborators for many years. Amy Marschilok, associate professor in the Department of Chemistry and deputy director of the current center, was a key contributor to the proposal’s content.

“Preparing a proposal of this size and scope requires the efforts of an outstanding team, including the senior investigators, and staff,” said Esther Takeuchi. “They have all been essential to our success.”

The renewal was one of 43 EFRC awards announced by the DOE in August to fund research being done at institutions across the United States. The awards, totaling $400 million, are aimed at bringing together multidisciplinary scientific teams to tackle the toughest scientific challenges and remove roadblocks to advancing energy technologies.

“The research funded will address electrochemical energy storage,” said Takeuchi. “We are investigating the fundamental science of electrochemically active materials and how they evolve within a complex battery environment. This includes the investigation of how the materials change with use, the role of the electrolyte, and the changing interfaces within the battery.” 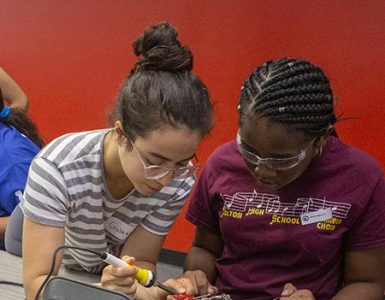 Join the ‘Girl Power in STEM: Break the Bias!’ Symposium on March 5

Girl Power in STEM: Break the Bias! is a symposium that celebrates the accomplishments of women in science, technology, engineering and math (STEM) fields. It will be held on Saturday, March 5, from 9:30 am to 4:30 pm...