Seawolves Football to Take On Towson on September 23 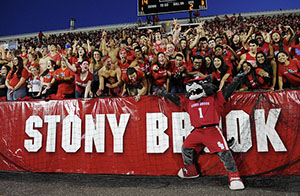 Senior WR Ray Bolden (Euless, Texas) has a shining personality and has shone brightly on the field for the Stony Brook football team this season. Catch Bolden, a 2017 team captain, and the rest of the Seawolves when they host CAA Football rival Towson at Kenneth P. LaValle Stadium on Saturday, September 23. Kickoff is set for 6 p.m. ET.

The Seawolves (2-1, 1-0 CAA Football) are coming off a 45-7 victory over Sacred Heart in LaValle Stadium last weekend, while Towson (2-1, 0-0 CAA Football) earned a win at Saint Francis last Saturday.

The game is the CAA Football Game of the Week and will be broadcast live on CBS Digital/College Sports Live and, like every Stony Brook football game, can be heard live on The Shark 94.3 FM.

THE SERIES
This will be the fifth meeting between the two conference foes. The series is knotted up at two wins each. The visiting team has won each of the previous four meetings, including a 27-20 Stony Brook victory last season in Towson.

ABOUT TOWSON
Towson’s two wins came against Morgan State and at Saint Francis. The Tigers, who will play their third straight road game on Saturday, open CAA Football play against the Seawolves.

ESPN COLLEGE GAMEDAY IN NYC
Stony Brook will have a presence at Saturday morning’s ESPN College GameDay that will be live in New York City’s Time Square. Wolfie as well as members of the Spirit of Stony Brook Marching Band and cheerleaders and the dance team will be on hand in Time Square to be a part of the best pregame show in all of college football. Be sure to tune into ESPN at 9 a.m. ET.