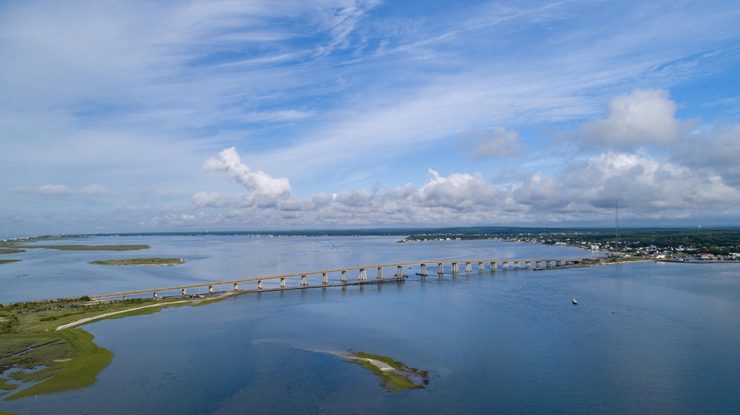 SOUTHAMPTON, NY, August 30, 2022 — Today scientists from Stony Brook University’s School of Marine and Atmospheric Sciences (SoMAS) announced the culmination of a decade of science in a paper published in Frontiers in Marine Science, an international peer-reviewed journal, which describes a novel restoration approach used in Shinnecock Bay that has led to a 1,700 percent increase in the landings and densities of hard clams in that estuary, along with the expansion of seagrass meadows and the end of harmful brown tides – a result that brings the Shinnecock Bay back to its 20th Century glory for shellfishing and the result may serve as a shining example of a process to restore other estuaries around the country and world.

The Long Island hard clam was once the greatest fishery in the history of New York State. In the 1970s, two out of three hard clams eaten in the United States came from Long Island. Since that time, the fishery had collapsed by more than 99 percent and, despite more than four decades of recovery efforts, the fishery has never responded, until now.

A decade ago, Shinnecock Bay was an estuary that was seemingly irrecoverable. By 2011, the landings of the hard clam, historically the dominant filter feeding bivalve in New York estuaries, had collapsed. As a keystone organism, this loss exacted a trickle-down effect across the entire estuary, as much of the seagrass across this system had been lost, and harmful and intense brown tides were occurring annually.  And while the situation was emblematic of estuaries across Long Island and across the world, the state of the system seemed particularly dire.

“99.5 percent. Sometimes numbers are used as hyperbole, but that is how much the landings of hard clams had declined from the 1970s to 2011 in Shinnecock Bay,” said Stony Brook University Endowed Chair and Professor of Marine Science, Chris Gobler, PhD, and lead author of the study. “These bivalves are known as ecosystem engineers since their ability to filter feed can remove algae, improve water clarity, and have downstream effects on habitats like seagrass meadows that need clear water to thrive. When an estuary experiences a loss of filter-feeding bivalves, the ecosystem-wide effects can be enormous. We knew that a key to recovering this ecosystem would be to re-establish the hard clam population in Shinnecock Bay.”

The Stony Brook scientists also knew that the task of hard clam restoration would not be easy, as over

40 years of previous efforts had been largely unsuccessful.  A new approach was needed, one based on science and tailored to the specific nature of Shinnecock Bay.

The path to restoration

Working with fellow Marine Science Professor, Brad Peterson, Gobler embarked on a whole ecosystem study of Shinnecock Bay in 2004 to understand the factors constraining clam and seagrass populations and drivers of poor water quality. What they discovered was a recruitment-limited population of hard clams, with adults so rare that the odds of successful reproduction for these broadcast spawning individuals were exceedingly low. This discovery, in part, led to the primary approach of what became the central effort of the Shinnecock Bay Restoration Program: The creation of hard clam spawner sanctuaries, regions where adult hard clams would be able to maximize their reproductive output, with their spawn circulating across the entire Bay.

To optimize the creation of spawner sanctuaries, the scientists needed three important components: Financial support to execute the plan, cooperation from regional officials and baymen, and careful science to identify the ideal location for the sanctuaries and to monitor progress.  Fortuitously, all of these components came together.

Nine years of support for the project was generously provided largely by the Laurie Landeau Foundation with additional support from the New York Department of Environmental Conservation. The Town of Southampton Trustees worked with Stony Brook University scientists and the Town of Southampton Baymen Association to identify regions that would be ‘no-take’ zones where clam harvest was banned so planted adult hard clams could re-populate the bay without being poached.  Finally, the scientists identified regions that would maximize the ability of adult clams to reproduce and the retention of their spawned offspring within the bay.

“The spawner sanctuaries amounted to goldilocks zones. They were far away enough from ocean inlets so the spawn or larvae would not be flushed into the Atlantic Ocean, but not so far away from clean ocean water that the adult clams would perish due to poor water quality,” said Professor Gobler. “Being able to use science to identify the ideal site for locating the spawner sanctuaries was a key to success for this program.”

Restoration success did not occur overnight. Over a five-year period (2012-2017), more than three million adult hard clams were planted in the spawner sanctuaries in Shinnecock Bay and given that it takes several years for clams to grow to harvestable size, the rebound of the population was going to take time. But over time, the densities of hard clams across Shinnecock Bay did increase, as did the harvests, and in both cases, those increases were primarily among small clams, the precise size of clams what would be expected from the spawner sanctuaries.

In addition, scientists developed a new DNA-based method to track the spawn of the hard clams and demonstrated that they were progressively transported from the western part of the Bay to the eastern half of the Bay where densities increased disproportionately. The coupled increase in both clam densities and clam harvests were not fully anticipated by scientists.

“The results of this restoration amount to a win-win for the environment and the economy”, said Mike Doall, co-author and Associate Director of Shellfish Restoration and Aquaculture within SoMAS.  “Not only has the health of the ecosystem recovered, but it has helped resurrect a once thriving hard clam fishery, benefitting the livelihoods of baymen, and restoring an important aspect of Long Island’s maritime history.”

According to Professor Gobler and co-authors brown tides in New York have contributed to the collapse of bivalve populations and diminished seagrass meadows, and had occurred more frequently and intensely in Shinnecock Bay than anywhere in the world.  But progressively as clams were planted and clam populations expanded, brown tides diminished and then disappeared from Shinnecock Bay, with the system being free of the scourge for six consecutive years, despite their annual occurrence in neighboring Great South Bay. There has never been a six-year period without brown tide in Shinnecock Bay dating back to before their first appearance in 1985.

“The successful restoration of Shinnecock Bay has recently led to global distinction for this estuary,” says Ellen Pikitch, PhD, a co-author and Endowed Professor of Ocean Conservation Science at SoMAS.

“This honor signals that Shinnecock Bay is a beacon of hope – not only for Long Island – but for areas around the world,” adds Pikitch. “We have demonstrated that sustained, science-guided research, restoration and monitoring can undo the damage that has been done, and this is reason for optimism that similar programs elsewhere will also yield positive results.”

Stony Brook University, a flagship of the State University of New York (SUNY) system, is going far beyond the expectations of today’s public universities. With nearly 27,000 students, 2,800 faculty members, more than 200,000 alumni, a premier academic medical center and 18 NCAA Division I athletic programs, Stony Brook is a research-intensive distinguished center of innovation dedicated to addressing the world’s biggest challenges. The university embraces its mission to provide comprehensive undergraduate, graduate and professional education of the highest quality, and has been ranked 23rd among top public universities by Forbes and 38th among public universities in the U.S. News & World Report Best Colleges listing. Fostering a commitment to academic research and intellectual endeavors, Stony Brook’s membership in the Association of American Universities (AAU) places it among the top 65 research institutions in North America. The university’s distinguished faculty have earned esteemed awards such as the Nobel Prize, Pulitzer Prize, Indianapolis Prize for animal conservation, Abel Prize and the inaugural Breakthrough Prize in Mathematics. Stony Brook has the responsibility of co-managing Brookhaven National Laboratory for the U.S. Department of Energy — one of only eight universities with a role in running a national laboratory. Providing economic growth for neighboring communities and the wider geographic region, the university totals an impressive $7.23 billion in increased economic output on Long Island. Follow us on Facebook (https://www.facebook.com/stonybrooku/) and Twitter(@stonybrooku).