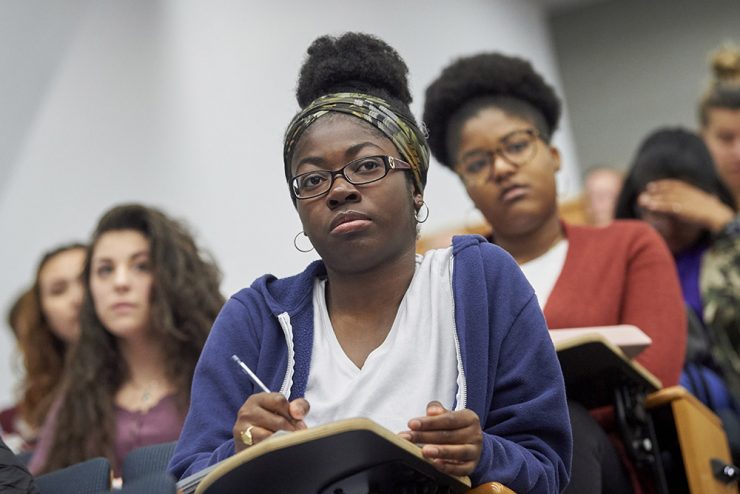 To celebrate the inauguration of Maurie McInnis as Stony Brook University’s new president, this symposium honors her accomplishments as a national leader in higher education and as an historian, including as author/editor of Educated in Tyranny: Slavery at Thomas Jefferson’s University. The event will illuminate the historical context and lasting impacts of inequities in students’ preparedness, resources, and access to college and graduate school. Upon taking the helm of Long Island’s flagship SUNY campus, President McInnis also renewed her long-standing commitment to advancing equality in higher education.

The symposium will feature Edward Ayers, professor of humanities and president emeritus at the University of Richmond, and author of numerous award-winning books about American history; Dia Bryant, executive director of the Education Trust-NY, an advocacy organization dedicated to improving educational outcomes for children from kindergarten to college; VanJessica Gladney, a doctoral student at the University of Pennsylvania, who has researched its institutional ties to slavery for the “Penn & Slavery Project” and served as a community liaison to share these findings with the public; and Jennifer Anderson, professor of history at Stony Brook University, whose current scholarship focuses on the roots of racial segregation and economic inequality on Long Island.

Edward Ayers, professor of humanities and president emeritus at the University of Richmond, has written and edited 12 books, including In the Presence of Mine Enemies: Civil War in the Heart of America, winner of the Bancroft Prize and the Beveridge Prize; and The Promise of the New South: Life After Reconstruction, a finalist for the National Book Award and the Pulitzer Prize; and, most recently, The Thin Light of Freedom: The Civil War and Emancipation in the Heart of America.

He has also served as president of the Organization of American Historians and been named National Professor of the Year. In 2013, he received the National Humanities Medal from President Obama, who hailed Ayers’ “commitment to making our history as widely available and accessible as possible.”

Dia Bryant, executive director of the Education Trust-New York, works closely with civil rights, business and advocacy organizations to advance statewide educational equity. Her passion for equity in education came about as a young child in Detroit, Michigan, when she discovered that math had answers when life did not. She received a BA in economics from Kalamazoo College, a master’s in math education from Brooklyn College, and a PhD in education leadership from Harvard University.

While at Harvard, she studied the history of Black education and school district leadership in America. She also worked with the Data Wise Project, Reimagining Integration: Diverse and Equitable Schools, and Harvard Business School’s Public Education Leadership Project. She subsequently became a math teacher and then the founder and principal of the Vista Academy in Brooklyn. Before joining the Education Trust, she served as special assistant to the first deputy chancellor in New York City’s Department of Education, working on equity-focused instructional support for schools.

VanJessica Gladney, a doctoral student at the University of Pennsylvania, has worked with the “Penn & Slavery Project” since its first semester. As an undergraduate, she researched the 18th-century connections between slavery and Penn’s original and current campuses, as well as the activities of its slaveholding trustees and faculty members.

After graduating in 2018, she served as the provost’s public history fellow, presenting information about the project to members of the greater Philadelphia community. During Summer 2019, she assisted with the design of an augmented reality mobile application that will feature student work.

Currently, she manages the project’s website, speaks at campus events on behalf of the project and is pursuing a PhD in Penn’s History Department.

Jennifer L. Anderson is associate professor of history at Stony Brook University. She has an MA from the Winterthur Program in Early American Culture and a PhD in Atlantic and Early American History from New York University. She is the author of Mahogany: The Costs of Luxury in Early America about the social and environmental history of the tropical timber trade in the 18th century. In 2013, she curated an exhibition at New York University about Sylvester Manor, a 17th-century plantation in New York, and in 2019 served as an advisor for Long Island Museum’s exhibition, “Long Road to Freedom: Surviving Slavery on Long Island.”

She has received many fellowships and awards, including the Society of American Historians’ Nevins Prize, the Murrin Prize from the McNeil Center for Early American Study, a Mellon Post-Doctoral Fellowship, and a Scholars and Society Fellowship from the American Counsel of Learned Societies. She also shared an Emmy nomination for research on “Traces of the Trade,” a documentary about the Northern slave trade. Strongly committed to public history, she serves as a historical consultant at numerous historic sites and museums.

Visit the Inauguration website for more information and events.