Yark Beyan ’19 Gets Out the Vote 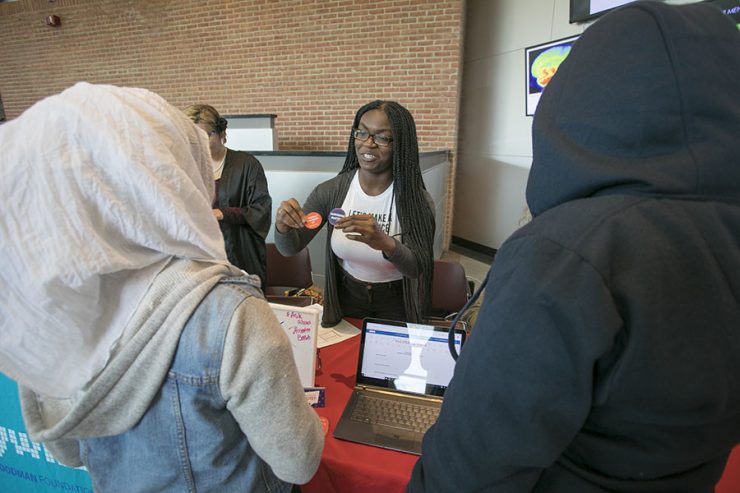 Anyone faulting today’s collegiate youth for voter apathy has yet to meet Yark Beyan ’19.

Beyan can be found every Monday through Thursday at the Student Activities Center registering students to vote as a team leader for Stony Brook’s Center for Civic Justice.

Since 2015, Beyan has helped register more than 17,500 students. This semester,  she and the 43 interns she supervises have registered 2,733 additional students.

That effort has resulted in two awards at the national level for their work in voter engagement. The first was the 2017 Outstanding Student Affairs Program Award, given by SUNY to the Stony Brook chapter of the Vote Everywhere program, which is managed by the Center. The second award was the 2017 Bronze Seal for excellence in Student Voter Engagement, which reflected the Center’s voter turnout rates during the 2016 election.

Success breeds success, resulting in more than $10,000 in grants to help fund the Center’s initiatives.

“The largest grant came from the Students Learn Students Vote Coalition, which recognizes our impactful voter engagement model at Stony Brook and allows us to work with other universities on Long Island and help them develop plans similar to ours,” said Beyan.

A political science major, with minors in international and sustainability studies, Beyan presented at two national and one regional conferences explaining the initiatives she and her fellow students have implemented related to voter engagement.

Besides registering students to vote, Beyan and the Center’s interns inform students of upcoming election dates and help educate them on who will be on the ballot.

The top priority is that the student fills out the voter registration form by themselves, getting any guidance they require.

Beyan said that the most common misconception is that every Stony Brook Student can vote at our on-campus polling location the day of the election.

“We are constantly telling students that their polling site is assigned based on the address with which they register to vote. If a student lives on campus and is registered to vote with their on-campus address, then their polling site will be on campus.”

As a student of political science, Beyan knows that exercising one’s right to vote in the simplest way to ensure their voice is heard in our political system.

‘If there are potholes on your block, if you think the cost of a good education is too high and that your resources are limited, doing the research and finding a candidate who wants to work on issues that you want to see fixed is the only way those things will happen,” she said.

Beyan relies on interpersonal and leadership skills she cultivated from years of service as one of four students currently serving on the President’s Council of Student Advisors, one of ten students chosen to represent Stony Brook as a student ambassador, as an undergraduate college fellow responsible for mentoring students during their transition from high school to college, and as a Stony University tour guide.

She receives annual training from the National Civic Leadership Training Summit hosted by the Andrew Goodman Foundation, where she has learned about the obstacles to student voting in the United States and effects strategies to remove them and better engage students in the process.

“Each role has taught me how to interact effectively with my peers,” she said. “I’ve always used a human-to-human connection when registering to vote. When I encounter a student who is reluctant to register I always ask why. I think it is important to listen and get to the root of the obstacle or feeling holding them back and then I offer a solution or counterargument. In the end they usually register.”

Beyan has even tried her hand as smaller business owner, helping to create, brand, market and sell hair care and skin care products for her company, African Grow n’ Glow. A percentage of her profits go toward empowering women and future goals include partnering with nonprofits that are interested in implementing women’s empowerment initiatives in developing nations.

Students interested in interning at the Center for Civic Justice can identify faculty sponsors in their respective departments and receive up to three credits per semester. “It’s a great way to incorporate service-learning into a departmental curriculum,” Beyan said.