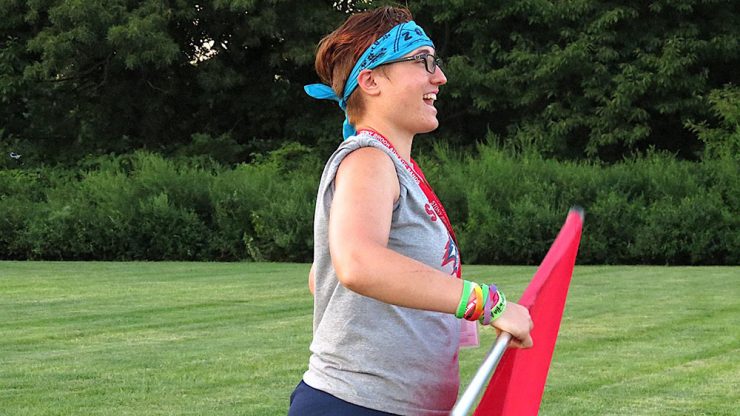 If you ever want to start a conversation with Lucy DiBenedetto ’19, just ask her about her backpack.

It’s festooned with lanyards, pins and hand-stitched patches that carry messages of diversity — like the patch marking the America East Conference initiative “You Can Play in AE” (since renamed “Spread Respect”) aimed at promoting diversity and inclusion in all America East sports. In fact, Lucy was featured in a USA Today article about the “You Can Play” basketball night at Stony Brook in 2016 with the line: “A tuba player drapes herself in a rainbow flag.”

“Diversity is very, very, very important to me,” said the Westhampton Beach, NY native. “Stony Brook does a good job at furthering it. I think it’s awesome that students from around the world come here to learn and share their experiences with the student body. I’m a huge fan of the Interfaith Center and their efforts to bridge together different groups and different walks of life to promote kindness and peace.”

Before she was enrolled at the University, Lucy was accepted into the Women in Science and Engineering honors program (WISE), a highly selective community of women who are interested in pursuing careers in STEM. The program is intended to empower, encourage and retain women in the field.

“The WISE program is key at creating diversity within STEM, breaking down the stereotype that STEM fields are for men only,” Lucy said.

She is also a member of the Spirit of Stony Brook Marching Band, an organization that Lucy labels “one of the most diverse groups on campus.”

“Its approximately 180 current members are a clear example of people coming together and respecting one another regardless of their backgrounds and beliefs,” she said.

As a coastal environmental studies major with a minor in geospatial sciences, Lucy is just as interested in non-human diversity.

“No living thing, whether terrestrial or marine, is made alike. We all have our differences and that should be celebrated,” she said.

Lucy got hooked on biodiversity growing up by the ocean in Westhampton Beach. “I was fortunate to attend a school district that prided itself on caring for and restoring the environment,” she said. She joined the Westhampton Beach High School Environmental Club and served as recycling coordinator and vice president.

But it was her time growing up near Quantuck Bay, where she spent time with her mother challenging a proposed development along the bay’s westernmost headwater creek, that helped to unleash the activist in Lucy. She has also benefitted from the encouragement of her teachers and mentors to speak out about causes she’s passionate about.

“While boating in Quantuck Bay I’d look at the water and notice that it wasn’t a pretty color; it was murky brown instead of the typical shades of blue,” she said. That made her question what was happening and she felt the need to investigate.

At Stony Brook, through her WISE affiliation, Lucy immersed herself in research that involved rotations with both the Shinnecock Bay Restoration Program (shinnecockbay.org) and Brookhaven National Lab. When that ended, she was invited to stick around with ShiRP as a benthic (relating to the ocean’s lower layer) monitoring volunteer, assisting in trawls from May 2016 until August 2018.

Those trawls revealed a high presence of thermal pollution, characterized by a low dissolved oxygen level and high temperatures and a scarcity of marine life. Her solution: implement a series of oyster reefs and submerged vegetation to clean out and oxygenate the water column.

During her junior year, Lucy took a course titled “GIS Fundamentals I,” which opened her eyes to a new career vista. GIS (Geographic Information Systems) allows for data visualization (using maps and 3D scenes) and analysis of different areas based on spatial information, such as coordinate points. To further her knowledge of GIS, Lucy applied for a number of related internships, one of which was with Esri, the world’s leading producer of GIS software, where she served as a technical support intern in 2018.

That led to other internships, speaking engagements at multiple GIS conferences in California and at the American Association of Geographers Annual Meeting in Washington D.C.  These activities helped her to land a job as a solutions architect for PSEG-Long Island. Geospatial Center Professors Maria Brown, Sung-Gheel (Gil) Jang and Donna Selch helped prepare her for a career as a GIS instructor.

To help her prepare for presentations at the 2019 Geodesign Summit and the 2018 Fall Long Island GIS User Conference, Lucy practiced in front of that semester’s GIS Fundamentals class, employing it as a mock audience.

“I didn’t realize I had the gift of communicating science to the general public until I started giving presentations last year,” said Lucy. “To convince non-believers, we need to see a network of people with different backgrounds, methods of thinking and beliefs coming together to create a multidisciplinary widely encompassing solution.” 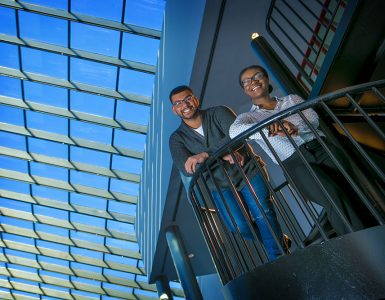 For most students, going to college is a stepping stone to greater things, a means of reaching their professional goals and aspirations. But a growing number of Stony Brook students are getting a head start on...

The CDC, as well as Stony Brook University and Stony Brook Medicine, are closely monitoring an outbreak of a 2019 novel coronavirus (2019-nCoV) in China.