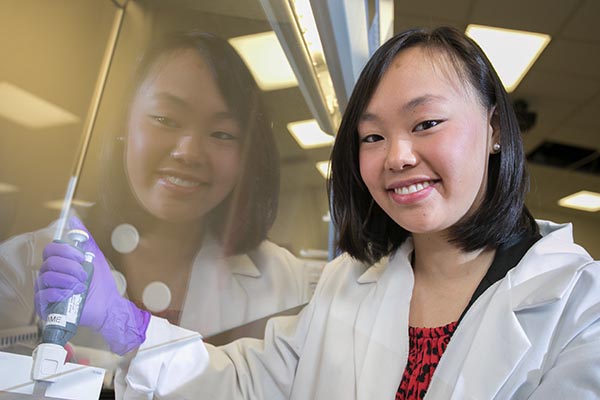 Rebecca Anderson ’17 found her academic calling the hard way — losing her father to lung cancer after a three-year battle, when she was only nine.

Less than a decade later, as an undergraduate researcher at Stony Brook, she acquired hands-on experience in the search for less toxic cancer drugs.

“I spent a lot of time as a young child in hospitals and doctors’ offices with my family,” Rebecca says. “From then on, I knew I wanted to be a doctor and I have put myself on that path.”

In middle school, Rebecca had an affinity for biology, so she joined a Science Olympiad and chose anatomy, physiology and epidemiology events to compete in. She followed suit in high school and kept excelling, making a biology major in college a no-brainer.

She found another way to pay homage to her father, Ross, by attending Stony Brook, from which he graduated in 1991.

Rebecca then set about to increase her range of knowledge and marketability by minoring in French as well as picking up some business skills so she can potentially give back to the community in the future.

“French is an international language and very popular in developing countries and I would love to someday take some time to volunteer with Doctors Without Borders,” Rebecca says. “Additionally, I have French-speaking relatives, which keeps me motivated to improve in that language.”

Knowing that she wanted to get involved in community service on campus as a freshman, Rebecca became a commuter assistant at Commuter Student Services. “Starting college is scary and a huge adjustment,” she says. “With such a large commuter population on campus we need good resources and I love knowing I have made other students’ experiences better at Stony Brook.”

Rebecca had always loved theater and when she learned about the program “Swallow This!” run by the Center for Prevention and Outreach Health Education Office and the Department of Theater Arts, she found another way to give back to the community. Swallow This is a three credit/semester class in which students learn to be effective peer educators who are able to address a number of issues facing college students, including substance abuse, healthy relationships and stress.

Realizing that she could benefit from learning how to run a business if she someday opens a private practice, Rebecca applied to be an assistant treasurer with Undergraduate Student Government (USG). “Being able to help other students as a student leader with a good mix of office work and interpersonal work was such a great experience for me,” she says.

After an unsuccessful bid to become the USG treasurer, Rebecca answered a post for a new business and advertising manager at the student-run Statesman newspaper and got the job.

Smithtown residents who dine at the Crazy Crepe Café, where she has performed cooking and customer service duties, may also recognize Rebecca.

She owes much of her desire to perform community service to being a University Scholar. “It made a huge impact on me and helped me feel connected to Stony Brook,” she says. “I wanted to create a sense of community for the next group of freshmen and inspire others as I had been inspired when I got here.”

As busy as she made herself, Rebecca never lost sight of her overall goal, which was to help win the battle against cancer.

Her first research experience came in high school when she was part of a team at Brookhaven National Laboratory that studied mice with compromised immune systems stricken with lung cancer.

The following summer Rebecca interned at Stony Brook Hospital and gained invaluable kills learning about MRIs and imaging while working with a doctor involved in pioneering surgery for spinal stenosis.

Rebecca next interned at the Living Skin Bank in the Department of Biochemistry, researching the effects of synthetic curcumin, a constituent of the spice turmeric, on cancer cells.

In summer 2016, Rebecca shadowed a dermatology oncologist during a six-week program at the Memorial Sloan Kettering Center in Hauppauge.

Rebecca’s classroom research focuses on drugs that kill lung and pancreatic cancer cells by inhibiting the activity of the cell’s mitochondria.

Although she spends a great deal of time in the laboratory, Rebecca reminds herself of medicine’s human side on a daily basis. “Before interacting with patients, we must take a moment to think about what they are going through,” she says. “We must treat them as if we are in their place. Above all, we have to look for the best in every situation.”