Undergraduate Researcher Is Hooked on Primatology 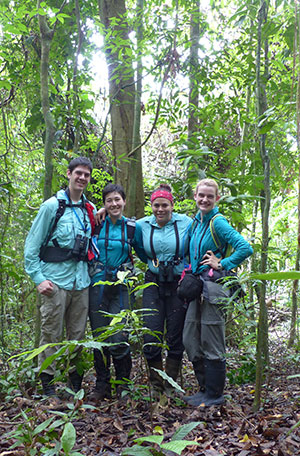 Lynn Lewis-Bevan ’17 has some advice for freshmen feeling pressured to declare a major — don’t.

Lynn, who credits her father with encouraging her to “see the science behind everything,” was introduced to a Jane Goodall documentary in third grade and she was hooked on studying the natural world. Initially, she wanted to become a veterinarian but surrendered that dream because she didn’t want to euthanize animals.

She almost gave up her science dreams because she was advised by administrators in her North Carolina high school, who told her that they didn’t see her doing well in science. The reason? Her fine arts background didn’t fit the stereotypical science mold.

So Lynn fell back on her other love, theater. She loved stage managing and building sets and when her father’s friend suggested that Stony Brook might be a good fit for her because of its theater program, she applied and was accepted.

But the budding thespian never got over her love for science. She also inquired about Stony Brook’s science program and learning of its strength, declared a theater major but looked forward to taking science classes “for fun.”

And although she had wanted to put as much distance as she could between herself and her hometown, Charlotte, she wasn’t prepared to experience Northeast winters, and to feel quite so out of place among New Yorkers.

So for the first two years, she immersed herself in the theater department through classes and shows, as well as Pocket Theater, a student group. The bond she formed with her theater friends prevented her from transferring during those initial turbulent years of adjusting to Long Island.

But she discovered that anthropology was a science in which she could excel when she rediscovered her interest in learning about primates.

Another factor contributed to Lynn’s academic career choice — her family did not own a working television for a lot of her childhood. That was a good thing, which led her to spend a lot of time outdoors as a child, as “anthropology necessitates being comfortable with being outdoors,” said Lynn.

It was in renowned primatologist Patricia Wright’s Primate Conservation class that Lynn decided to go to Madagascar.  From September to November 2015, Lynn was the brainchild of an independent research project on seed dispersal at the forest edge.  She interviewed local farmers to determine lemur species in the area and focused on how humans and lemurs could coexist in a positive way.

In the spring 2016, following her Madagascar experience, Lynn interned in the Department of Anthropology with Professor Amy Lu, organizing and preparing databases of behavioral data collected from geladas, a species of Old World monkey, at a field site in Ethiopia.

Another internship followed, this time in Panama with Professor Margaret Crofoot and her graduate student Grace Davis, where she examined the communication calls of white-face capuchins.

For her Honors Project, Lynn is examining the outcome of juvenile aggressive interactions in two species of monkeys.

“Different groups of monkeys have different systems of determining who gets what resources, since fighting for them is costly,” said Lynn. “Some monkeys, such as geladas, have a matrilineal hierarchy where rank is passed down from mother to daughter. Others, such as leaf monkeys, have a hierarchy in which rank is based on personal health and fitness or their ability to win a fight.”

Her internship in Panama had many light moments, but she also experienced the dark side of research in a tropical milieu. While chasing monkeys through the forest, Lynn got tangled in some woody vines. When she later went to grab her bandanna to wipe dirt off her face, she felt a horrible pain in her hand ­— Lynn had gotten bitten by a bullet ant  — which inflicts one of the most painful stings known to mankind — and endured nausea and misery in the days that followed.

“Being stung was like becoming part of a weird club but one I hope to never join again,” Lynn said.

Despite that negative experience in the field, Lynn aspires to become a professor and continue her love affair with primatology. “They are such fascinating, beautiful creatures, with such complex lives and characteristics,” she said.