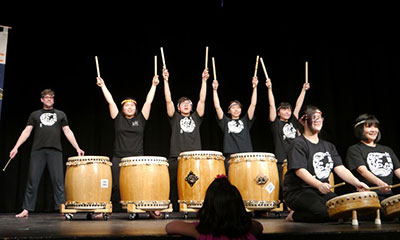 Centuries ago in Japan, taiko (big) drums, were used to motivate troops on the battlefield. Today Taiko is used in peaceful Shinto and Buddhist rituals, like those celebrating Earth Day at Stony Brook’s annual Earthstock festival taking place this year on April 22.

Miyazaki remained the Taiko Tides advisor until 2002, at which time Eva Nagase, a professor in the Department of Asian and Asian American Studies, and Brookhaven National Laboratory scientist Joe Dvorak assumed that role. Nagase received the Outstanding Advisor award from the Student Life Awards Committee in 2015.

In less than two decades, the organization has expanded its repertoire, matured in its ability and cemented its reputation, becoming part of the Eastern Collegiate Taiko group and is being encouraged to host the East Coast Taiko Conference in 2017.

The Taiko Tides’ repertoire has expanded from traditional Japanese pieces to include original compositions by members. “Our new members start out playing a piece called Renshu, which incorporates various movements that are necessary for playing taiko, and move on to more difficult pieces,” said Nagase.

“One of the traditional pieces, Chichibu Yatai Bayashi, requires players’ strength as well as precise movements,” she said. “Our unique take on Hiryu San Dan Gaeshi, which originated from Suwa Shrine in Nagano, Japan, demonstrates the beauty of the female style of taiko playing.”

Not only do the Taiko Tides make their own music, they also build their own drums, which are constructed from wine barrels. The club members stretch the hides with hand tools, using techniques similar to those used for centuries in Japan.

The group has also branched out with performances off campus, bringing taiko to the general public at local libraries and festivals, as well as to Brookhaven National Laboratory.

2015-16 has been a pivotal academic year for the Tides, because the Undergraduate Student Government granted the club a line budget, and that has kept treasurer Erica Lee ’17, a psychology major, busy.

That budget helped provide funding for campus events, such as De-Stress with Taiko Tides, held this past fall; a joint practice with University of Connecticut Taiko; and workshops with professional Taiko players, such as Kenji Furutate. The club also applied for grant that paid for Mark H. Rooney, another taiko player, to host a workshop on campus.

“Interest is up and our membership grown to 15 since last year,” said Erica.

Taiko Tides current president Sang Yeon Pak, ’16, a psychology major, discovered the group when walking around campus during the Involvement Fair in 2014. Attracted to the booming beats, he investigated where the sounds were coming from and the club welcomed him into its fold.

Chemical and molecular engineering major Noriko Taira, ’18, who is the group’s vice president, knew about the Taiko Tides before coming to Stony Brook, thanks to social media posts.

The pair works closely to keep the Taiko Tides running smoothly, both structurally and from a musical standpoint. Sang Yeon plays a small drum, the shime daiko, that produces a high-pitched sound. His primary role is to provide a linear, stable beat throughout the song. Noriko primarily plays the wine barrel-shaped chu daiko, but sometimes chips in on shime daiko and is learning the Japanese flute.

“My favorite performance was the Wolfie Showcase,” said Sang Yeon. “It took place by the Staller Steps and was the biggest crowd we ever performed for, maybe 1,000 people.”

Noriko cited a festival in Sag Harbor as a personal highlight. “I love how the little kids come close to the stage and enjoy trying out the drums at the end of the performance,” he said.

Founder Miyazaki sees it from global perspective. “Taiko Tides is unusual on campus because the members come from so many backgrounds, unlike clubs that tend to be monocultural. Our first president was Turkish, for example,” she said. “Taiko has the ability to bring together people who simply love playing these drums. We could use more activities in this world, like taiko, that unify rather than divide us.”