Sydney Bell ‘22 Makes a Splash with Sustainable Designs on Campus 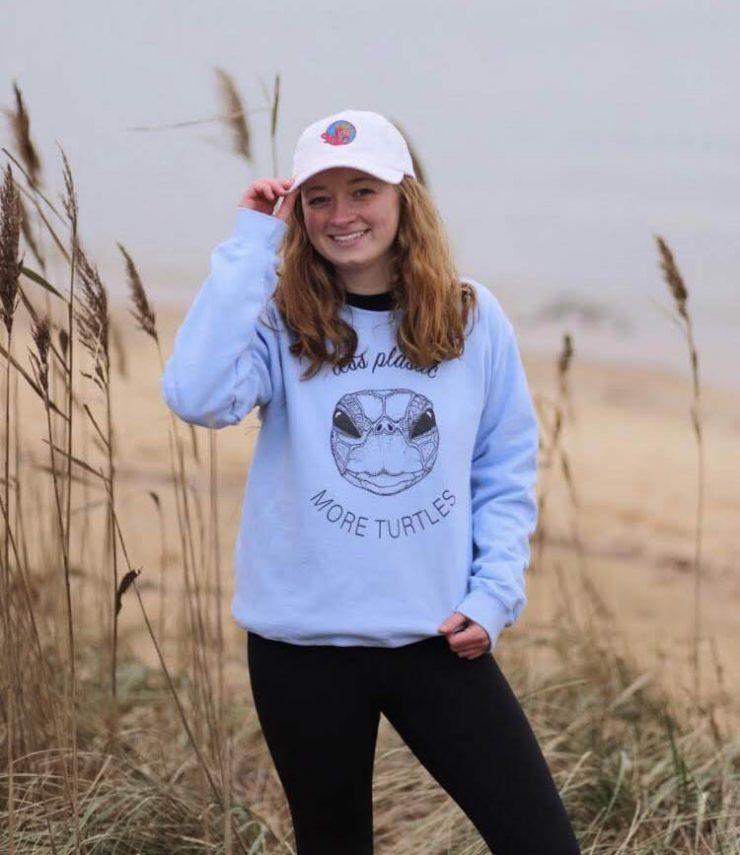 March is Women’s History Month and an ideal time to celebrate the brave, bold and fearless women who have influenced history. Freshman Sydney Bell is making history as she creates and sells eco-friendly apparel to help save the oceans.

Sydney, a Marine Vertebrate Biology major, wanted to be a marine biologist since she was in third grade. “I came to Stony Brook because it was so close to the ocean,” Sydney said. In the past, Sydney has swum with whale sharks at the Georgia Aquarium, trained dolphins, and volunteered at a sea turtle hospital during a marine biology camp she attended.

Her love for the oceans, however, is accompanied by a passion for art. “I’ve always drawn ocean creatures just for fun to use in my different art classes, and then one day I thought, oh, this would look really cool on a shirt, I would totally wear that!” Sydney said.

After a conversation with her father, who suggested Sydney make a business from her art, Tidal Tee’s Apparel was born. “All of our designs are ocean-themed, and 100% of profits from each design go to ocean conservation non-profits,” Sydney said. Tidal Tee’s Apparel has sold almost $8,000 in apparel thus far, and has donated to seven different ocean conservation organizations, including The Bimini Sharklab, The Black Fish, National Geographic’s Pristine Seas, The Cousteau Society, Sea Shepherd, The Ocean Cleanup, and Coral Restoration Foundation.

At only 18 years old, Sydney started her own business in which all of the apparel is sustainably made, employing water-based ink to eliminate chemical runoff into water sources. Likewise, the apparel is made in factories that use solar panels and recycle their water, and all plastic packaging used by Tidal Tee’s is biodegradable and recyclable. “I really just want to raise awareness about the issues facing our ocean and hopefully raise a lot of profits that will be able to help save the ocean,” Sydney said.

“Marine life is so important to me just because we’ve only discovered about five percent of the ocean, and I think it’s crazy that we’re killing off all these species and damaging this ecosystem that we know almost nothing about,” Sydney said.

Sydney hopes that students gain a greater respect for the ocean and work to protect marine life whenever possible. “We’re so close to the ocean here at Stony Brook, and every little thing you do impacts that ecosystem.”

Tidal Tee’s apparel is now available at Shop Red West, and online at tidalteesapparel.com. Meet Sydney and find out more at the “Meet the Designer” event on Wednesday, March 27 from 1 pm to 2:20 pm at Shop Red West in the Melville Library.