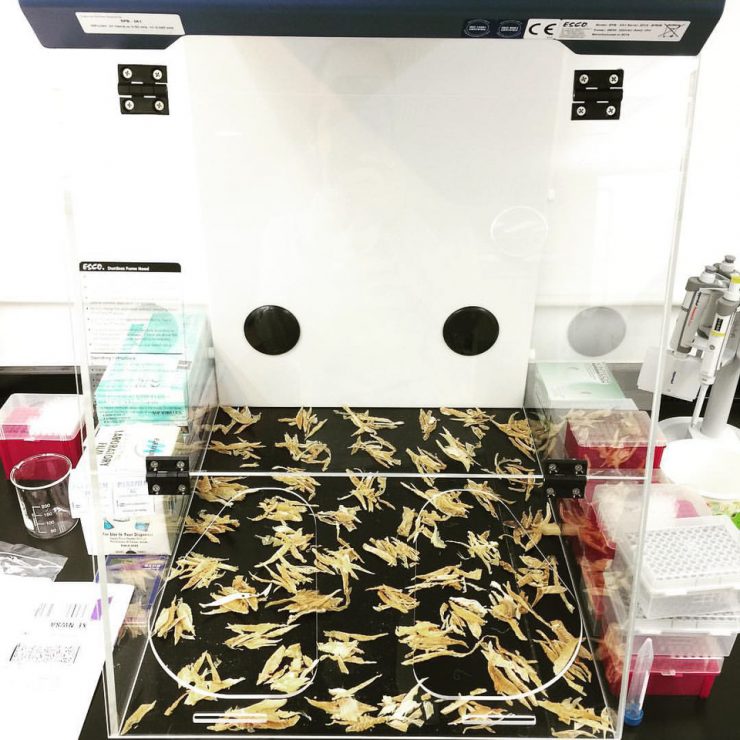 As millions of viewers watch the Discovery channel’s Shark Week 2018, two Stony Brook researchers are among a team that is determined to protect endangered shark species.

A study published in Conservation Letters by lead author Diego Cardeñosa, a Stony Brook University PhD student, reveals that several threatened shark species are still common in the fin trade after being listed on the Convention on International Trade in Endangered Species of Wild Fauna and Flora (CITES). “CITES‐listed Sharks Remain Among the Top Species in the Contemporary Fin Trade” is the first assessment of the species composition of the fin trade after CITES regulations were put in place for commercially important shark species.

Since September 2014, CITES has regulated scalloped hammerheads, smooth hammerheads, great hammerheads, oceanic whitetips, and porbeagle sharks, some of the world’s most vulnerable and highly traded shark species. This means that permits are required to ship their products from country to country.

From February 2014 to December 2016, a collaborative research team from the U.S. and Hong Kong surveyed small scraps that are produced when imported fins are processed — when the skin, meat and cartilage is trimmed off the fin. Hong Kong is one of the world’s largest importers of shark fins, which are used to make the delicacy, shark fin soup.

The team conducted DNA testing on randomly selected scraps to look for CITES-listed species. They also recorded the incoming weights of fins from these species reported through the CITES Trade Data Base in 2015. According to this database there were only 16 shipments of these species into Hong Kong at a total weight that was less than one half of a percent of the weight of all fins imported that year.

“If this is an accurate reflection of imports, we would expect CITES-listed species would be uncommon among fins being processed in 2015-2016,” said Cardeñosa, a PhD student in the School of Marine and Atmospheric Sciences (SoMAS).

“However, our research shows that these species are still commonly being processed at least one year after regulations were implemented,” emphasized Cardeñosa. “In fact, CITES-listed scalloped and smooth hammerheads represented the fourth and fifth most common species found in our survey, out of 82 species and species groups in total.” He also pointed out that because the time lag between import and processing is unknown, it is difficult to determine if some of the fins were imported before the regulations were in place.

“Although we can’t rule out some delayed processing of fins, the disconnect between reported imports and how common these species were in our survey does suggest that major underreporting of CITES imports is occurring,” said Cardenosa. “It also seems unrealistic that many countries that exported fins of these species to Hong Kong suddenly stopped doing so when the regulations came in. But these findings would be consistent with other studies that have shown that compliance with CITES regulations is relatively low during the initial phase of implementation.”

“It is great that there is now a system in place to monitor trade in these threatened shark species,” said Demian Chapman, research team leader from Florida International University. “But listing them is just the first step. Our study highlights that countries fishing, trading, and consuming shark products all have a lot of implementation work to do.”

The team made some practical suggestions on how to improve inspection efficiency so that shark-importing nations like Hong Kong can better meet their obligations to CITES. While Hong Kong has been successful in their implementation efforts — hosting nine CITES workshops for enforcement officials which led to the seizure of 5.1 metric tons of fins from listed species since late 2014 — the research team recommends these additional actions:

Cardeñosa is now living and studying in Hong Kong to help authorities develop new approaches to monitoring fin imports for CITES-listed species, including DNA testing of fins directly at the port of entry.

Co-authors of the study include: Andrew Fields of SoMAS; Elizabeth A. Babcock, of the Rosenstiel School of Marine and Atmospheric Science at the University of Miami; Huarong Zhang and Gunter Fischer of the Kadoorie Farm and Botanic Garden in Hong Kong; Kevin Feldheim of the Field Museum, Chicago; Stanley K. H. Shea of the BLOOM Association in Hong Kong; and Demian D. Chapman of Florida International University.

The work was supported by The Pew Charitable Trusts, The Pew Marine Fellows Program and The Roe Foundation.