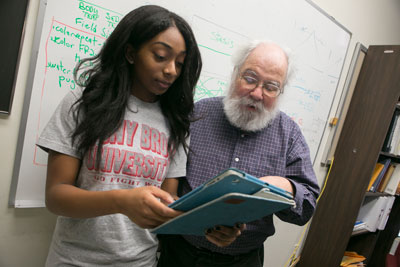 A trio of Stony Brook University undergraduate researchers are demystifying science via an entertaining new website that targets a lay audience.

The creators of Chewing The Scientific Fat aim to make science fun, engaging and interactive. Topics range from hair care myths to protecting our marshlands, and although the tone is informal, the science is solid.

It all began last summer when biochemistry major Laureano Andrade Vicenty ’16 was searching for a way to share the scientific knowledge he has gained as an undergraduate researcher. As he scanned his news feed on social media, he realized the most effective way to attain his goal would be to create a website.

“The general public harbors so many misconceptions on important topics such as climate change, vaccinations and drugs, and I do not often see these issues covered on my social media accounts. That inspired me,” Laureano said.

At the outset, Laureano, who is working toward his bachelor’s degree in biochemistry, got help from his girlfriend Shelsie Delphin, who is pursuing a career as a physician assistant at Mercy College in Dobbs Ferry, New York. She helped keep him motivated to build and design the site while writing many of the early articles.

Laureano soon turned to good friend Quiana Lewis ’17, a bioscience major, to join the team. Another addition, Tuesday Love ‘16, is a biology major who has accumulated more than 1,100 hours of community service in the Hudson Valley healthcare system and who volunteers with the Campus Community Emergency Response Team. Tuesday is poised to pursue a career in the medical field.

Tuesday’s involvement in Professor Jeffrey Levinton’s Bio 371 class — Restoration of Aquatic Ecosystems — stoked her interest in scientific writing. Her assignment was to measure water quality variation from an oceanic inlet to the urbanized shoreline of Jamaica Bay, collecting and interpreting data on salinity, chlorophyll, dissolved oxygen, ammonium and temperature.

“Professor Levinton made this more than a typical lab class; he made it a fun and engaging learning experience,” Tuesday said. “In addition to our data-collection trips, he had a guide walk us through the muddy salt marsh to learn what’s happening to spartina, a coastal grass, in Jamaica Bay, and what restoration is being done.”

“She worked closely with three teammates to produce a detailed report but then she told me of her participation in Chewing the Scientific Fat and her desire to communicate a very short version of the work to the public,” he said. “That she is part of a dedicated new student community committed to convey science on a level understandable by anyone is a great undertaking, and I hope it has a tremendous future.”

While the format for the scientific stories varies, the primary purpose remains to educate the reader.

“I would categorize this website as simply an educational science website oriented to the general public, “ said Laureano, who welcomes students who have introductory science courses under their belts to join the writing team.

The story with the most views so far was an article on study tips, garnering 60 likes, 15 shares and 435 clicks, most of which were from Stony Brook students.