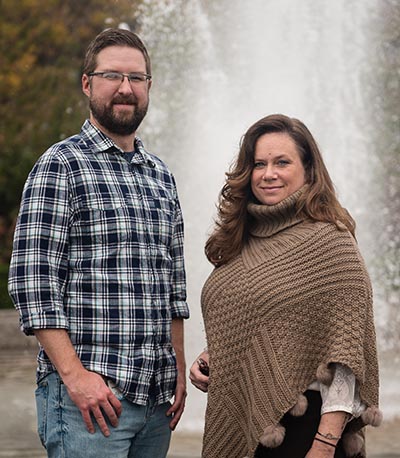 Two Stony Brook University students zeroed in on the forces shaping the future of higher education as participants in the SUNYCON 2016 Student Fellows Program Conference in October 2016.

Justine Finch Beringer ’17 and Greg Woody ’17, enrolled in the Higher Education Administration (HEA) program, were cited for their outstanding academic careers and extracurricular achievements and awarded SUNYCON fellowships. They are both earning Master of Arts degrees in the program.

“When you consider that there are 64 SUNY schools and out of all of them only 17 students were selected for SUNYCON, it’s mind-blowing,” says Justine.  “I almost thought it had to be a mistake!”

Both Greg and Justine learned about the SUNYCON application process through HEA Program Director Richard Gatteau.

“Having known Greg since his undergraduate years at Stony Brook, it has been rewarding to see his leadership skills develop in the higher education field,” says Gatteau. “Justine, another one of our outstanding students, has strong work experience in many industries and has shown a strong commitment and passion for helping others.”

“We were originally told that Stony Brook would send only one student as a fellow to the program,” says Greg. “Knowing how accomplished the other students were, I was not totally assured I would be selected but figured it was worth a shot. When I got the email that I had been selected, I was shocked.”

Greg cites his senior honors project paper as being pivotal to his successful academic career. Greg says that presenting his paper, “Striped Politics: A Political Study of the Flying Tigers,” sparked such a vigorous question-and-answer session that it led him to become a teaching assistant and First Year Seminar instructor.

In 2015 Greg began an internship at the College of Business, where he advises the faculty and administrative staff on best practices for accreditation, develops tools to facilitate program assessment, and analyzes business school class data to determine achievement of learning outcomes.

When he isn’t taking classes, Greg works as a clerical specialist in the Department of Urology at Stony Brook University Hospital.

To get to where she is today, Justine had to overcome a series of hurdles. Raised by her grandparents until she was six years old, followed by a decade living with her substance-abusing mother and an uncle in Vermont, Justine has learned to expect the unexpected and become resourceful.

Later as a single mother, she earned a paralegal degree, ran a successful custom cake business, worked in the hospitality field and returned to college full-time in 2012 to finish her undergraduate degree in professional communications at Farmingdale State College.

A subsequent internship at SUNY Farmingdale landed her a job as a staff writer for Military Life. That was followed by a two-year contractual job promoting the literary career of Bridgehampton, New York-based author Talia Carner.

Justine currently works thirty hours a week as a program coordinator for the Research Aligned Mentorship Program, which is based at SUNY Farmingdale and funded by the U.S. Department of Education.

While both students had high expectations for SUNYCON, nothing could prepare them for the actual experience, which included meeting SUNY Chancellor Nancy Zimpher — a highlight of their conference experience.

“I also had the opportunity to also speak with Ben Casselman, the author of FiveThirtyEight,” says Greg. “Each regular session at the conference was incredibly well-designed and led to eye-opening discussions. But the real surprise were the extra sessions in the form of ‘fireside chats,’ which consisted of intimate conversations directly with the speakers from the conference panels and other education leaders.”

Justine says she most enjoyed meeting a group of “exceptionally bright students” from SUNY Albany and hearing their feelings, views and hopes for the futures.

“We participated in an enlightening lecture on implicit bias and learned about the difficulties facing student-athletes,” says Justine. “And the conference ended with a segment titled ‘Dear 45,’ a letter of hope to whomever turned out to be the next United States president.”

Justine says she hopes to earn a PhD and teach and advocate for underrepresented students.

Greg has more of an administrative goal for himself. “Ultimately, I feel that by focusing on learning outcomes assessment I will be able to have an even greater impact on a larger number of students in improving their learning and experiences,” he says.

SUNYCON gave both Greg and Justine insight into where the future of higher education is headed.

“What I enjoyed most about SUNYCON was meeting and interacting with the other student fellows,” says Greg. “These are people who are going to be the next generation of higher-education faculty, staff and policymakers.”

Justine emphasizes the value of diversity and open-mindedness in education.

“We must never allow ourselves to pass judgment or cultivate pre-conceived notions about another person,” she says. “Our young people hold all the keys to the future and our best shot at a great investment is when we ensure these young people get the multifaceted education they need to thrive. If they succeed, so does society.”