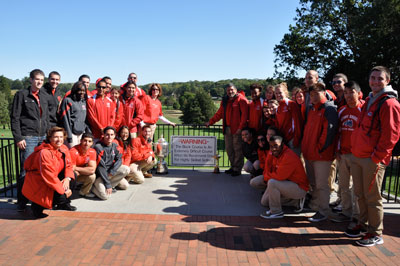 Stony Brook Athletics Training students and members of the Stony Brook Golf Club were on hand September 18 as Governor Andrew Cuomo announced a landmark agreement with The PGA of America to bring the 101st PGA Championship and the 45th Ryder Cup to Bethpage State Park in Farmingdale.

The 101st PGA Championship will take place in 2019 and mark the 13th time that New York has staged the season’s final major. The Ryder Cup is a biennial competition featuring the best golfers from Europe and the U.S. The 45th Ryder Cup, to be held in 2024, will be New York’s second time hosting.

At the event Stony Brook students had an opportunity to meet NYS Senate Majority Leader Dean Skelos and other New York State officials.